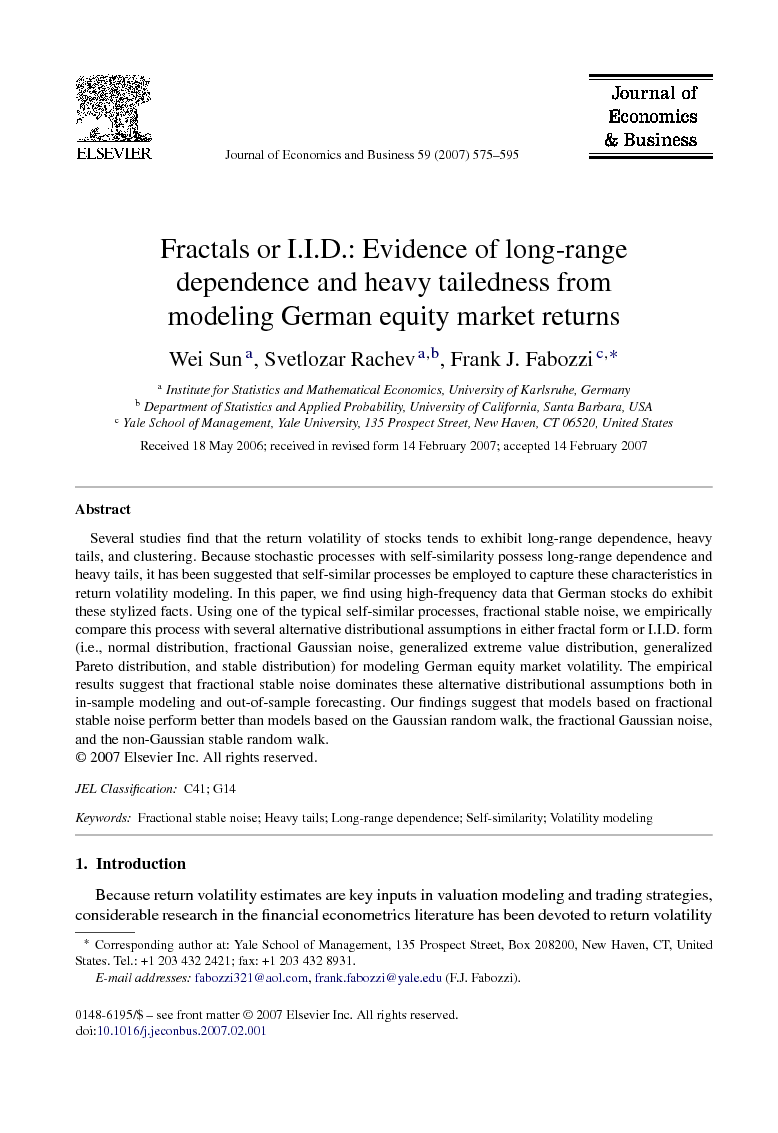 Several studies find that the return volatility of stocks tends to exhibit long-range dependence, heavy tails, and clustering. Because stochastic processes with self-similarity possess long-range dependence and heavy tails, it has been suggested that self-similar processes be employed to capture these characteristics in return volatility modeling. In this paper, we find using high-frequency data that German stocks do exhibit these stylized facts. Using one of the typical self-similar processes, fractional stable noise, we empirically compare this process with several alternative distributional assumptions in either fractal form or I.I.D. form (i.e., normal distribution, fractional Gaussian noise, generalized extreme value distribution, generalized Pareto distribution, and stable distribution) for modeling German equity market volatility. The empirical results suggest that fractional stable noise dominates these alternative distributional assumptions both in in-sample modeling and out-of-sample forecasting. Our findings suggest that models based on fractional stable noise perform better than models based on the Gaussian random walk, the fractional Gaussian noise, and the non-Gaussian stable random walk.

Because return volatility estimates are key inputs in valuation modeling and trading strategies, considerable research in the financial econometrics literature has been devoted to return volatility modeling. The preponderance of empirical evidence from financial markets throughout the world fails to support the hypothesis that returns follow a Gaussian random walk.1 In addition to the empirical evidence, there are theoretical arguments that have been put forth for rejecting both the Gaussian assumption and the random walk assumption. One of the most compelling arguments against the Gaussian random walk assumption is that markets exhibit a fractal structure. That is, markets exhibit a geometrical structure with self-similarity when scaled (see Mandelbrot, 1963 and Mandelbrot, 1997). As to this point, the normal distribution assumption and the random walk assumption cannot both be simultaneously valid for describing financial markets. It seems that the only way to explain fractal scaling is to abandon either the Gaussian hypothesis or the random walk hypothesis. By abandoning the Gaussian hypothesis, researchers end up with stable Paretian distributions.2 The normal distribution is a special case with finite variance (details are discussed in Rachev & Mittnik, 2000). The implication of rejecting the random walk hypothesis is that researchers must accept that returns in financial markets are not independent but instead exhibit trends. Markets prone to trending have been characterized by long-range dependence and volatility clustering. Samorodnitsky and Taqqu (1994) demonstrate that the properties of some self-similar processes can be used to model financial markets that are characterized as being non-Gaussian and non-random walk. Such financial markets have been stylized by long-range dependence, volatility clustering, and heavy tailedness. Long-range dependence or long memory denotes the property of a time series to exhibit persistent behavior, i.e., a significant dependence between very distant observations and a pole in the neighborhood of the zero frequency of its spectrum.3 Long-range dependence time series typically exhibit self-similarity. The stochastic processes with self-similarity are invariant in distribution with respect to changes of time and space scale. The scaling coefficient or self-similarity index is a non-negative number denoted by H, the Hurst parameter. If View the MathML source{X(t+h)−X(h),t∈T}=d{X(t)−X(0),t∈T} for all h∈Th∈T, the real-valued process {X(t),t∈T}{X(t),t∈T} has stationary increments. A succinct expression of self-similarity is View the MathML source{X(at),t∈T}=d{aHX(t),t∈T}. The process {X(t),t∈T}{X(t),t∈T} is called H-sssi if it is self-similar with index H and has stationary increments (see Doukhan et al., 2003; Samorodnitsky & Taqqu, 1994). In modeling return volatility, long-range dependence, volatility clustering, and heavy tailedness should be treated simultaneously in order to obtain more accurate predictions. Rachev and Mittnik (2000) note that for modeling financial data, not only does model structure play an important role, but distributional assumptions influence the modeling accuracy. A distribution that is rich enough to encompass those stylized facts exhibited in return data is the stable distribution. Fama (1963), Mittnik and Rachev, 1993a and Mittnik and Rachev, 1993b, Mittnik et al., 2000 and Mittnik et al., 2002, Rachev (2003), and Rachev et al. (2005) have demonstrated the advantages of stable distributions in financial modeling. Moreover, Samorodnitsky and Taqqu (1994), Rachev and Mittnik (2000), Rachev and Samorodnitsky (2001), Doukhan et al. (2003) and Racheva and Samorodnitsky (2003) have reported that long-range dependence, self-similar processes, and stable distribution are very closely related. In this paper, we empirically investigate the return distribution of 27 German DAX stocks using intra-daily data under two separate assumptions regarding the return generation process (1) it does not follow a Gaussian distribution and (2) it does not follow a random walk. In our empirical study, we develop the ARMA-GARCH model based on these assumptions. Abandoning the Gaussian hypothesis, we analyze our data by employing an ARMA-GARCH model with several independent and identically distributed (I.I.D.) residuals following a normal distribution, stable distribution, generalized extreme value distribution, and generalized Pareto distribution. When we desert the random walk hypothesis but maintain the Gaussian hypothesis, we utilize an ARMA-GARCH model with fractional Gaussian noise. The ARMA-GARCH model with fractional stable noise is used when we drop the assumptions that the return distribution is Gaussian and follows a random walk. Using several goodness-of-fit criteria for evaluating both in-sample simulation and out-of-sample forecasting for a sample consisting of 27 German stocks included in the DAX, we find that the ARMA-GARCH model with fractional stable noise outperforms the other models investigated. This finding suggests that such a model can capture the stylized facts better without considering either the Gaussian or random walk hypotheses. In other words, this result supports the hypotheses that return distributions in financial markets are better characterized as fractals rather than Gaussian random walks. We organized the paper as follows. In Section 2, we introduce two self-similar processes: fractional Gaussian noise and fractional stable noise. The method for estimating the parameters in the underlying process is introduced in Section 3. In Section 4, methods for simulating fractional Gaussian noise and fractional stable noise are explained. The empirical results are reported in Section 5, where we compare the goodness-of-fit for both in-sample simulation and out-of-sample forecasting based on several criteria for the ARMA-GARCH model with fractional stable noise and with other distributions. We summarize our conclusions in Section 6.

There is considerable interest in the modeling of market volatility. Most models assume that residuals are independent and identically distributed and follow the Gaussian distribution. But the overwhelming empirical evidence does not support the hypothesis that financial asset returns can be characterized as Gaussian random walks. There are a number of arguments against both the Gaussian assumption and random walk assumption. One of the most compelling arguments against the Gaussian random walk is that there exist fractals in financal markets. In this paper, we empirically investigate 27 German DAX stocks sampled over 2 years at 1 min frequency level under three separate assumptions regarding the return generation process (1) it does not follow a Gaussian distribution, (2) it does not follow a random walk, and (3) it does not follow a Gaussian random walk. When we model non-Gaussian random walk, we employ one of the self-similar processes (i.e., fractional stable noise) to capture the fractal structure in financial markets. In our empirical analysis, we investigate the ARMA-GARCH model with six different forms of residuals in both fractal forms (i.e., fractional stable noise and fractional Gaussian noise) and I.I.D. forms (i.e., stable distribution, white noise, generalized Pareto distribution, and generalized extreme value distribution) for the modeling volatility of 27 German stocks. In-sample (1 month) simulation and out-of-sample (1 week) forecasting were empirically investigated. By using parameters estimated from the empirical series, we simulate an in-sample series for each stock return and one-step ahead forecasting series with these six modeling structures. Then we compared the goodness-of-fit for the generated series to the sampled series by adopting four criteria for the goodness-of-fit test (the Kolmogorov–Simirnov distance, Anderson–Darling distance, Cramer von Mises distance, and Kuiper distance). Based on a comparison of these criteria, the empirical evidence shows that the ARMA-GARCH model with fractional stable noise demonstrates a better performance in modeling volatility than other models. Our results also indicate that there exists a fractal structure in financial markets and the I.I.D. assumption in modeling is inappropriate for characterizing financial asset returns. The empirical evidence suggests that stocks exhibit three characteristics: long-range dependence, heavy tailedness, and volatility clustering. Many studies have found that the stable distribution is a better description of financial returns because it can capture heavy tailedness and has a close relationship with long-range dependence. As a self-similar process, fractional stable noise can capture the reported stylized facts in financial return data. This finding should be taken into account in modeling volatility so that more accurate prediction might be realized by well-defined functional models.