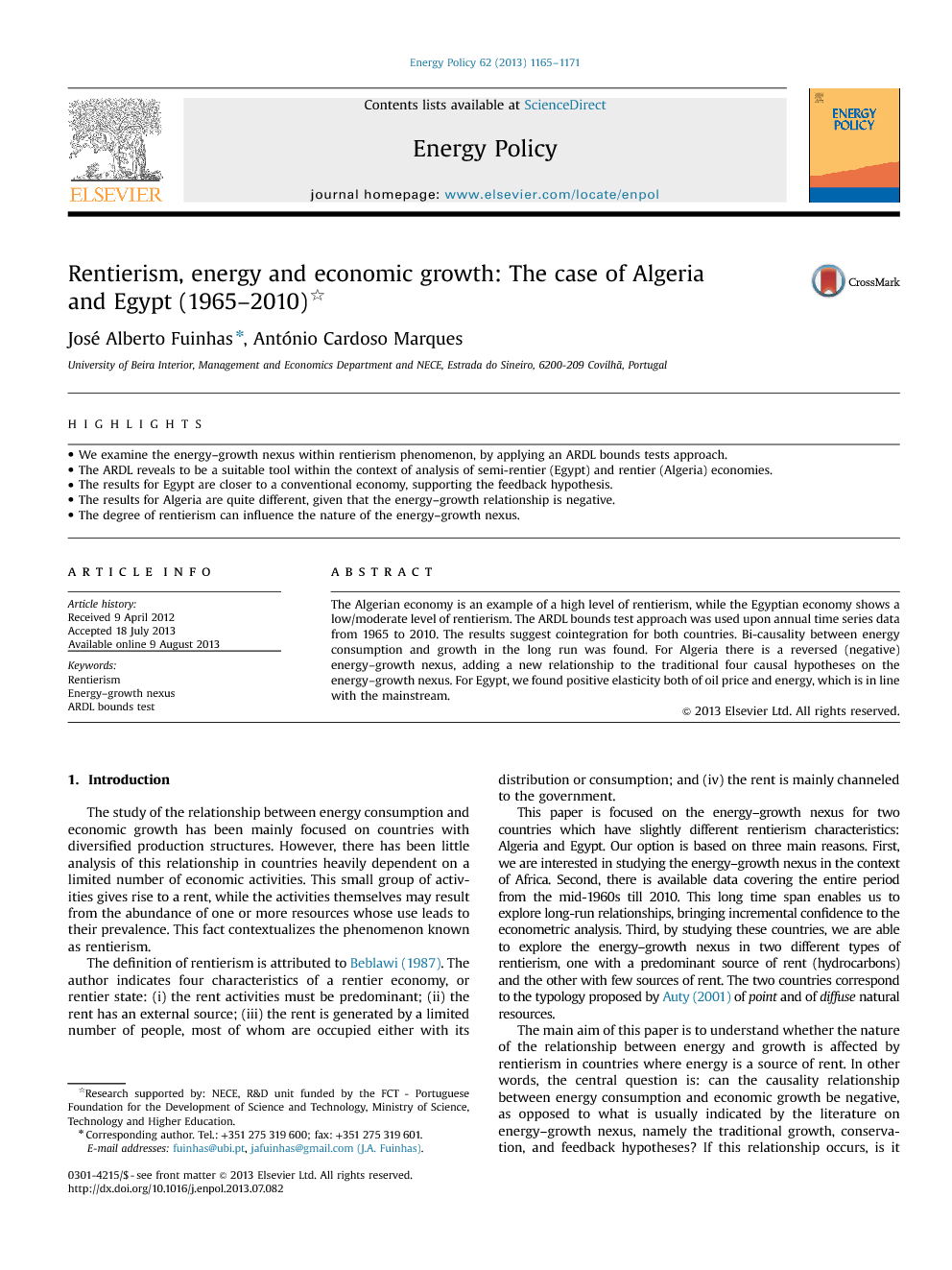 The Algerian economy is an example of a high level of rentierism, while the Egyptian economy shows a low/moderate level of rentierism. The ARDL bounds test approach was used upon annual time series data from 1965 to 2010. The results suggest cointegration for both countries. Bi-causality between energy consumption and growth in the long run was found. For Algeria there is a reversed (negative) energy–growth nexus, adding a new relationship to the traditional four causal hypotheses on the energy–growth nexus. For Egypt, we found positive elasticity both of oil price and energy, which is in line with the mainstream.

The study of the relationship between energy consumption and economic growth has been mainly focused on countries with diversified production structures. However, there has been little analysis of this relationship in countries heavily dependent on a limited number of economic activities. This small group of activities gives rise to a rent, while the activities themselves may result from the abundance of one or more resources whose use leads to their prevalence. This fact contextualizes the phenomenon known as rentierism. The definition of rentierism is attributed to Beblawi (1987). The author indicates four characteristics of a rentier economy, or rentier state: (i) the rent activities must be predominant; (ii) the rent has an external source; (iii) the rent is generated by a limited number of people, most of whom are occupied either with its distribution or consumption; and (iv) the rent is mainly channeled to the government. This paper is focused on the energy–growth nexus for two countries which have slightly different rentierism characteristics: Algeria and Egypt. Our option is based on three main reasons. First, we are interested in studying the energy–growth nexus in the context of Africa. Second, there is available data covering the entire period from the mid-1960s till 2010. This long time span enables us to explore long-run relationships, bringing incremental confidence to the econometric analysis. Third, by studying these countries, we are able to explore the energy–growth nexus in two different types of rentierism, one with a predominant source of rent (hydrocarbons) and the other with few sources of rent. The two countries correspond to the typology proposed by Auty (2001) of point and of diffuse natural resources. The main aim of this paper is to understand whether the nature of the relationship between energy and growth is affected by rentierism in countries where energy is a source of rent. In other words, the central question is: can the causality relationship between energy consumption and economic growth be negative, as opposed to what is usually indicated by the literature on energy–growth nexus, namely the traditional growth, conservation, and feedback hypotheses? If this relationship occurs, is it stable over time? To the best of our knowledge there are no studies that address the energy–growth nexus for rentier states. We explore the potential of dummies to control for outliers and structural breaks. Indeed, if we did not take into account these outliers and structural breaks, then cointegration relations in the energy–growth nexus could be masked. To do so, the ARDL bounds test methodology is used. This econometric technique allows the use of both impulse and shift dummies, making it possible to capture cointegration relationships, given that they allow economic shocks and structural breaks to be accommodated, respectively. The results strongly suggest that the analysis of the energy–growth nexus must be controlled for the rentierism phenomenon. Indeed, it is observed that the dependence on a particular source of rent can lead to an atypical relationship, i.e., energy consumption may not be a driver of economic growth. This result does not fit into any of the traditional hypotheses of the energy–growth nexus, namely growth, conservation, feedback and neutrality hypotheses. The paper evolves as follows. Section 2 summarizes the energy–growth nexus, and exposes the idiosyncratic features of rentier states. Section 3 discloses data, methodology and models. Section 4 reveals the results. In section 5 the results are discussed, and section 6 concludes.

This paper adds to the literature on the energy–growth nexus by studying this phenomenon within the specific realities of rentier countries. By modeling a long period and focusing on Algeria and Egypt, cointegration relationships were found. In a conventional economy, a positive contribution from energy consumption to economic growth is expected. However, we note that, for Algeria, this contribution is negative. This could suggest that during the period under analysis, it was advised to export oil and import goods and services rather than producing them domestically. Two phenomena could occur. First, energy consumption occurs mainly in activities that are not directly productive, which do not add to output as a consequence of rentier mentality. Second, consuming energy domestically has an associated high opportunity cost of not exporting oil and obtaining rent. The conclusions for Egypt are closer to a conventional economy. The degree of rentierism in Egypt is lower than in Algeria, and the evidence supports that more diversification in productive activities contributes to a more efficient allocation of resources, particularly energy. The specificity found for a rentier economy indicates that, when analyzing the energy–growth nexus, one should take into account the degree of rentierism of countries which have natural energy resources as a source of rent. As a consequence, further research is needed into other countries with different degrees of rentierism. Given the lack of annual data for long periods, an alternative is to work with higher data frequency.