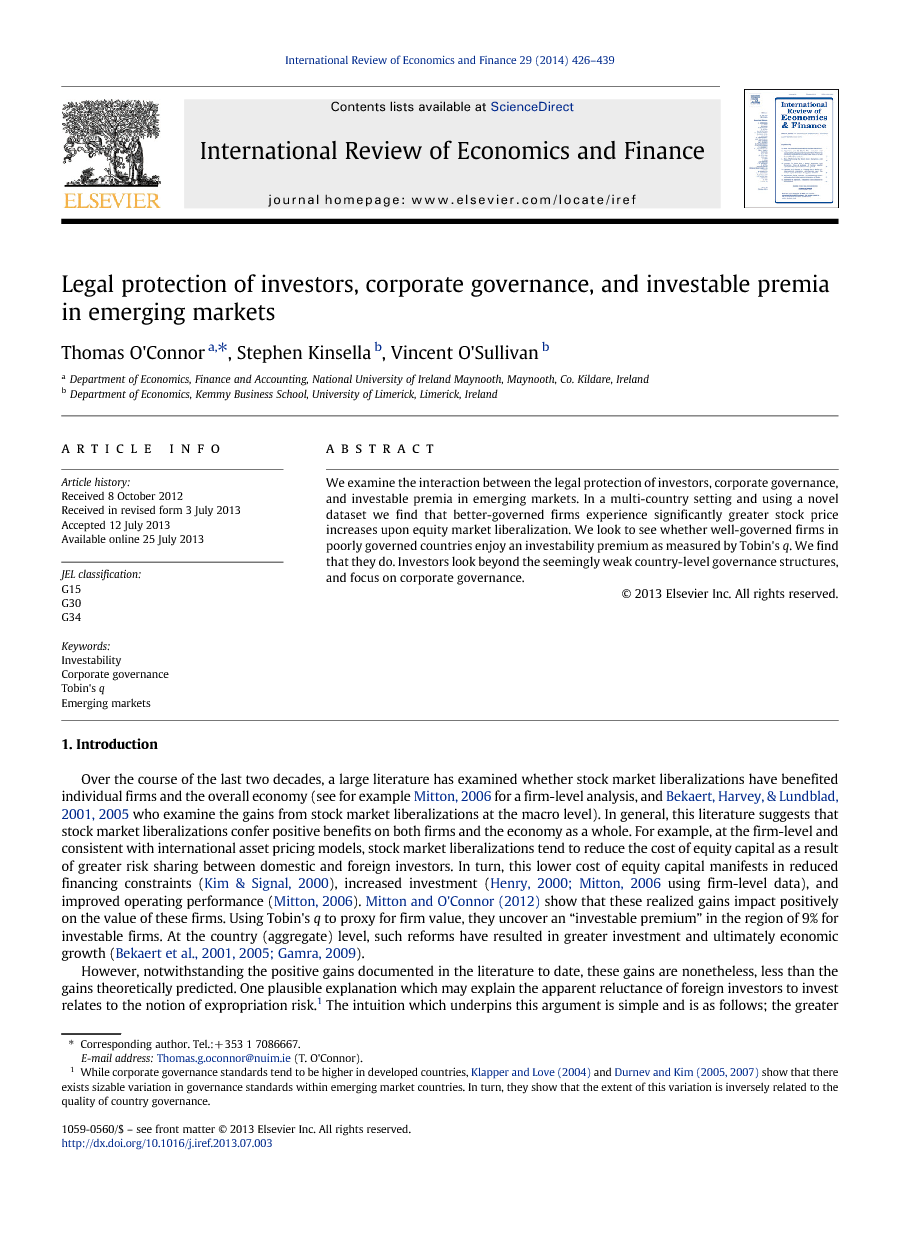 We examine the interaction between the legal protection of investors, corporate governance, and investable premia in emerging markets. In a multi-country setting and using a novel dataset we find that better-governed firms experience significantly greater stock price increases upon equity market liberalization. We look to see whether well-governed firms in poorly governed countries enjoy an investability premium as measured by Tobin's q. We find that they do. Investors look beyond the seemingly weak country-level governance structures, and focus on corporate governance.

Over the course of the last two decades, a large literature has examined whether stock market liberalizations have benefited individual firms and the overall economy (see for example Mitton, 2006 for a firm-level analysis, and Bekaert et al., 2001 and Bekaert et al., 2005 who examine the gains from stock market liberalizations at the macro level). In general, this literature suggests that stock market liberalizations confer positive benefits on both firms and the economy as a whole. For example, at the firm-level and consistent with international asset pricing models, stock market liberalizations tend to reduce the cost of equity capital as a result of greater risk sharing between domestic and foreign investors. In turn, this lower cost of equity capital manifests in reduced financing constraints (Kim & Signal, 2000), increased investment (Henry, 2000 and Mitton, 2006 using firm-level data), and improved operating performance (Mitton, 2006). Mitton and O'Connor (2012) show that these realized gains impact positively on the value of these firms. Using Tobin's q to proxy for firm value, they uncover an “investable premium” in the region of 9% for investable firms. At the country (aggregate) level, such reforms have resulted in greater investment and ultimately economic growth ( Bekaert et al., 2001, Bekaert et al., 2005 and Gamra, 2009). However, notwithstanding the positive gains documented in the literature to date, these gains are nonetheless, less than the gains theoretically predicted. One plausible explanation which may explain the apparent reluctance of foreign investors to invest relates to the notion of expropriation risk.1 The intuition which underpins this argument is simple and is as follows; the greater the likelihood of expropriation, the smaller the flow of equity capital to these countries since foreign investors incur sizable monitoring costs should they invest in firms with poor corporate governance. This line of reasoning leads to a simple testable hypothesis; better-governed firms should reap the largest value gains from stock market liberalizations since foreign investors are much more likely to invest in these firms. Bae and Goyal (2010) test this prediction using a sample of firms in the period immediately surrounding the liberalization of the Korean equity market in 1992. They hypothesize that if expropriation risk in part explains the smaller than expected gains from liberalizations, then holding the country governance constant (as their analysis focuses on a single country), and accounting for cross-sectional differences in corporate governance practices among Korean firms, then the largest post-liberalization value gains should accrue to better-governed firms. Using a variety of measures to capture the governance practices of Korean firms, this is in fact what they find. In this paper, we account for cross-sectional differences in corporate and country governance, and examine how their interaction can explain the value gains from stock market liberalizations. Specifically, in this paper we examine the interaction between the legal protection of investors, corporate governance within firms, and “investable premia” in emerging markets. We generalise the findings of Bae and Goyal (2010), which looked only at South Korea, to a multi-country setting, and largely confirm their insight that better-governed firms experience significantly greater stock price increases upon equity market liberalization. We go a step further than Bae and Goyal (2010), and deepen that insight by looking to see whether well-governed firms in poorly governed countries enjoy an “investability premium” as measured by Tobin's q, following Mitton and O'Connor (2012). The intuition behind our paper is simple: firms with good corporate governance structures, but in countries with lower levels of foreign investment or weak investor protection should have premia attached to them, as they will flourish in their respective markets, especially with the help of outside capital injections and foreign expertise. In turn, this premium should be larger for these firms than for comparable firms from countries with poor investor protection. Recent evidence suggests that this is in fact the case ( Durnev and Kim, 2005 and Chen et al., 2009). Thus, a priori, we would expect that if foreign investors place a large premium on good governance and place an even larger premium when country governance is weak, then better-governed firms from countries with poor governance should enjoy the largest “investable premia”. We find that they do. Our findings suggest that investors look beyond the seemingly weak country-level governance structures, and focus on firm-level corporate governance 2. As such, our findings are consistent with some recent empirical and survey evidence which suggests that firm-level and country-level governance are substitutes for one another in emerging markets and that good corporate governance is more highly valued when country governance is poor ( Chen et al., 2009, Durnev and Kim, 2005 and McCahery et al., 2010). The paper begins by carefully describing our data in Section 2, moving on to a discussion of our regression models and results in Section 3, and concludes with a discussion and suggestions for further work in Section 4.