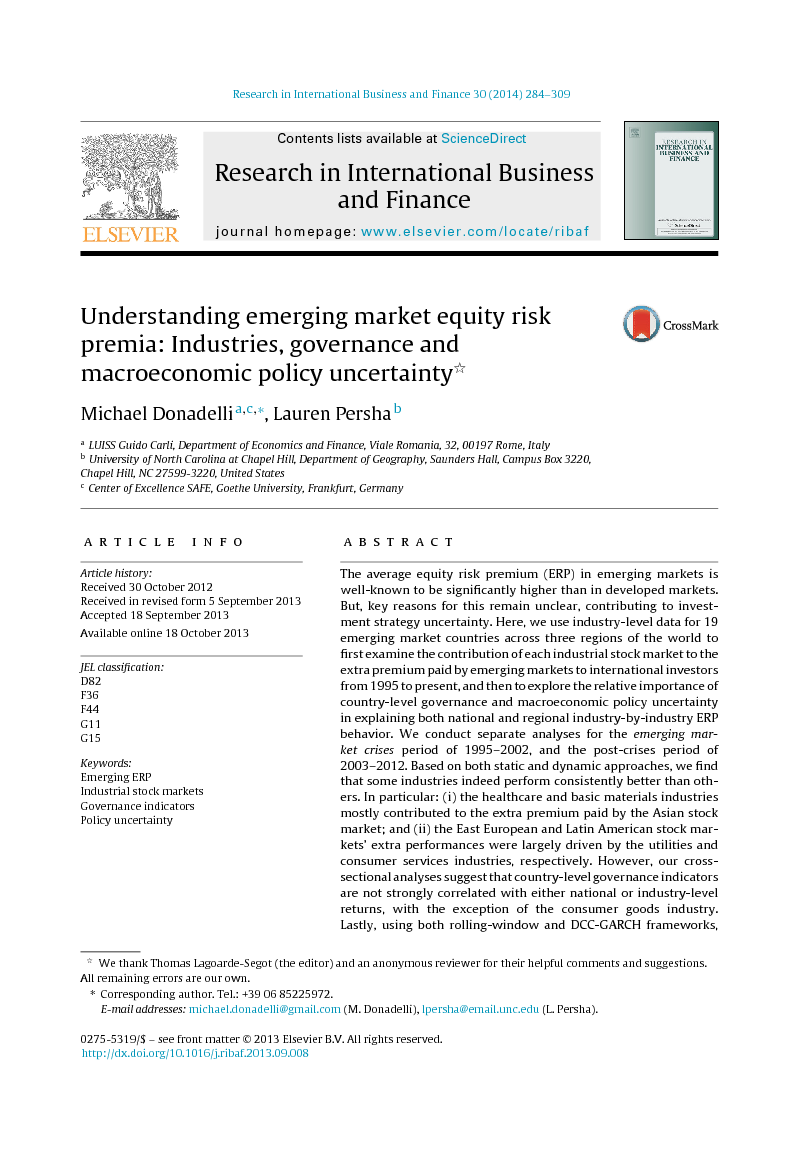 The average equity risk premium (ERP) in emerging markets is well-known to be significantly higher than in developed markets. But, key reasons for this remain unclear, contributing to investment strategy uncertainty. Here, we use industry-level data for 19 emerging market countries across three regions of the world to first examine the contribution of each industrial stock market to the extra premium paid by emerging markets to international investors from 1995 to present, and then to explore the relative importance of country-level governance and macroeconomic policy uncertainty in explaining both national and regional industry-by-industry ERP behavior. We conduct separate analyses for the emerging market crises period of 1995–2002, and the post-crises period of 2003–2012. Based on both static and dynamic approaches, we find that some industries indeed perform consistently better than others. In particular: (i) the healthcare and basic materials industries mostly contributed to the extra premium paid by the Asian stock market; and (ii) the East European and Latin American stock markets’ extra performances were largely driven by the utilities and consumer services industries, respectively. However, our cross-sectional analyses suggest that country-level governance indicators are not strongly correlated with either national or industry-level returns, with the exception of the consumer goods industry. Lastly, using both rolling-window and DCC-GARCH frameworks, we find that correlations between industrial stock market excess returns and a measure of global economic policy uncertainty are consistently negative, and follow similar patterns. Our empirical evidence as a whole suggests that industrial stock markets are more highly related both within and across countries and regions than has been suggested previously. Contrary to much existing empirical work, our results therefore suggest there is currently little space in emerging markets to exploit cross-industry portfolio diversification benefits.

Over the last twenty years, and especially after liberalization,31 emerging stock markets have captured the attention of many scholars as well as many practitioners. Emerging markets’ empirical regularities are well known (e.g. high returns, high volatility, time-varying moments). Using industry-level data for 19 emerging stock markets across three regions and over two different sub-periods (i.e. crises and post-crises), country governance indicators, and a newly introduced measure of economic policy uncertainty, we improve the existing literature in four main directions. First, we show that some industries contribute more than others in determining the extra premia paid by emerging markets to international investors. In particular: (i) the healthcare and basic materials industries have mostly contributed to the extra premium paid by the Asian stock market; (ii) the East European and Latin American stock markets’ extra performances have been largely driven by the utilities and consumer services industries, respectively; (iii) average emerging industrial stock market performances are lower than the US industrial stock market performances over the emerging market crises period. Second, country-level governance indicators do not explain the cross-section of emerging industrial stock market excess returns during the post-crises period, with the exception of the consumer goods industrial stock market. An alternative explanation, which stems from recent macro-finance literature in an asset pricing consumption-based context, could be that much of the higher emerging average ERP may be explained by higher emerging consumption growth rate volatility (Bansal et al., 2013). Third, we show that the time-varying unconditional and conditional correlations between emerging and US industrial stock market returns and policy uncertainty are consistently negative, suggesting that a higher economic policy uncertainty lowers stock prices. While some emerging markets might still display some degrees of segmentation, their national as well as industrial stock markets seem to follow developed stock markets’ dynamics. In all, the dynamics of the correlation coefficients between emerging and US industrial stock market returns and world equity portfolio return and economic policy uncertainty suggests that cross-industry diversification benefits are negligible. While “crises period findings” point out that portfolios diversification benefits might still be exploited, “post-crises findings” show that industrial stock markets are internationally related, thus, lowering the probability to reduce portfolio risk through cross-industry diversification. In contrast to Brooks and Del Negro (2004), our findings also suggest that the rise in the co-movement across international stock markets of the mid- and late-1990s do not represent a temporary phenomenon (see Figs. C.1–C.3). As documented here and elsewhere, correlations between international stock markets are increasing over time, especially in the last decade (Carrieri et al., 2007 and Donadelli, 2013b). We argue that such results, especially in the post-crises period, are mainly driven by balance sheet linkages among international investors and financial institutions across countries.