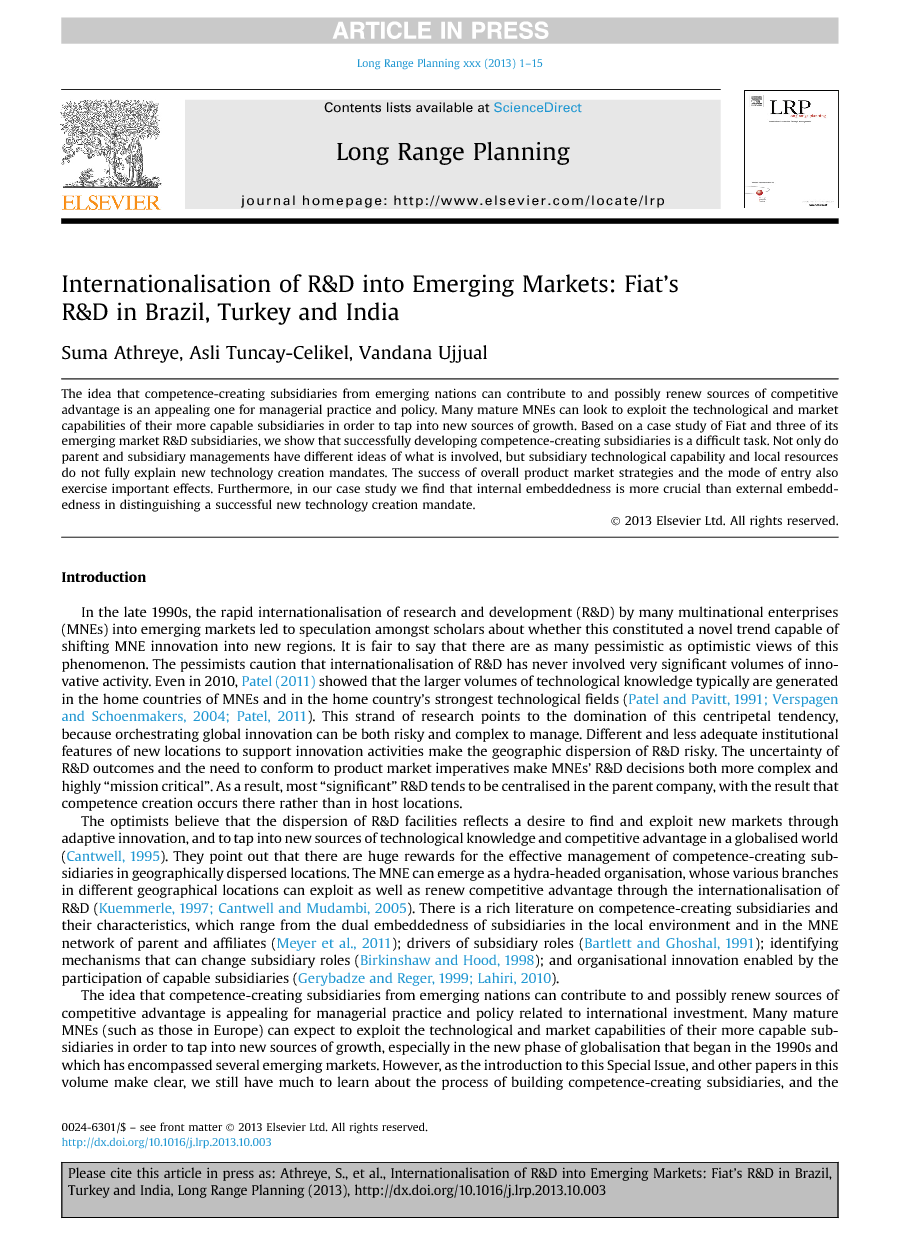 The idea that competence-creating subsidiaries from emerging nations can contribute to and possibly renew sources of competitive advantage is an appealing one for managerial practice and policy. Many mature MNEs can look to exploit the technological and market capabilities of their more capable subsidiaries in order to tap into new sources of growth. Based on a case study of Fiat and three of its emerging market R&D subsidiaries, we show that successfully developing competence-creating subsidiaries is a difficult task. Not only do parent and subsidiary managements have different ideas of what is involved, but subsidiary technological capability and local resources do not fully explain new technology creation mandates. The success of overall product market strategies and the mode of entry also exercise important effects. Furthermore, in our case study we find that internal embeddedness is more crucial than external embeddedness in distinguishing a successful new technology creation mandate.

In the late 1990s, the rapid internationalisation of research and development (R&D) by many multinational enterprises (MNEs) into emerging markets led to speculation amongst scholars about whether this constituted a novel trend capable of shifting MNE innovation into new regions. It is fair to say that there are as many pessimistic as optimistic views of this phenomenon. The pessimists caution that internationalisation of R&D has never involved very significant volumes of innovative activity. Even in 2010, Patel (2011) showed that the larger volumes of technological knowledge typically are generated in the home countries of MNEs and in the home country's strongest technological fields (Patel and Pavitt, 1991, Verspagen and Schoenmakers, 2004 and Patel, 2011). This strand of research points to the domination of this centripetal tendency, because orchestrating global innovation can be both risky and complex to manage. Different and less adequate institutional features of new locations to support innovation activities make the geographic dispersion of R&D risky. The uncertainty of R&D outcomes and the need to conform to product market imperatives make MNEs' R&D decisions both more complex and highly “mission critical”. As a result, most “significant” R&D tends to be centralised in the parent company, with the result that competence creation occurs there rather than in host locations. The optimists believe that the dispersion of R&D facilities reflects a desire to find and exploit new markets through adaptive innovation, and to tap into new sources of technological knowledge and competitive advantage in a globalised world (Cantwell, 1995). They point out that there are huge rewards for the effective management of competence-creating subsidiaries in geographically dispersed locations. The MNE can emerge as a hydra-headed organisation, whose various branches in different geographical locations can exploit as well as renew competitive advantage through the internationalisation of R&D (Kuemmerle, 1997 and Cantwell and Mudambi, 2005). There is a rich literature on competence-creating subsidiaries and their characteristics, which range from the dual embeddedness of subsidiaries in the local environment and in the MNE network of parent and affiliates (Meyer et al., 2011); drivers of subsidiary roles (Bartlett and Ghoshal, 1991); identifying mechanisms that can change subsidiary roles (Birkinshaw and Hood, 1998); and organisational innovation enabled by the participation of capable subsidiaries (Gerybadze and Reger, 1999 and Lahiri, 2010). The idea that competence-creating subsidiaries from emerging nations can contribute to and possibly renew sources of competitive advantage is appealing for managerial practice and policy related to international investment. Many mature MNEs (such as those in Europe) can expect to exploit the technological and market capabilities of their more capable subsidiaries in order to tap into new sources of growth, especially in the new phase of globalisation that began in the 1990s and which has encompassed several emerging markets. However, as the introduction to this Special Issue, and other papers in this volume make clear, we still have much to learn about the process of building competence-creating subsidiaries, and the managerial and other challenges involved in creating technological advantages for firms from their subsidiaries in different geographical locations. Our paper makes a contribution to a better understanding of the barriers and enablers of competence creation and new technological development in emerging market locations. We focus on a European MNE (Fiat) in the automobile sector — one of the first sectors to internationalise R&D (Dicken, 2003 and Manning et al., 2009). Fiat's “selective globalisation strategy”, adopted in the mid-1990s, shifted some of its R&D out of Europe into emerging markets such as Turkey, Brazil and India. Using a case-study approach, we study both the headquarters (HQ) R&D centre and affiliate R&D centres in emerging markets, to shed light on the constraints and managerial challenges involved in managing competence-creating subsidiaries in emerging markets and the constraints to new technology development from these subsidiaries.

Our case study shows that, although Fiat has a large number of production subsidiaries in emerging markets, only three of its emerging market subsidiaries undertook any R&D. And, only one of them (in Brazil) came close to possessing the characteristics of a competence-creating subsidiary — i.e., becoming a strategic leader with more product development responsibilities, and exhibiting dual embeddedness. This suggests that rise of competence-creating subsidiaries in emerging markets is difficult. Furthermore, technology creation requires active scanning and identification of new sources of ideas — a managerial capability that did not emerge from our interviews with CRF, the parent R&D lab. As a consequence of centralised control, we found that subsidiary role enhancement in Brazil was driven largely by parent firm investments. The success of the Brazilian subsidiary raises the question of why the Indian and Turkish subsidiaries did not develop into competence-creating subsidiaries. The failure of competence creation in subsidiaries in emerging markets has rarely been addressed in the literature, but our embedded case study design allows conjectures. We can suggest two explanations. First, we found that the evolution of subsidiaries' R&D activities was determined by the extent of success in achieving good product market performance rather than possession of technological capability alone. Thus, local competition and the company's overall product market strategy were crucial determinants of an increased subsidiary role. Market performance is constrained by the success of the HQ product market strategy. Here, decisions about what models to sell in which markets were made by Fiat HQ. Poor strategy formulation at headquarters, as well as poor execution of strategy, led to poor competitive outcomes at subsidiary level. The case of the Turkish subsidiary is very puzzling, since it was well-established and showed high levels of external embeddedness and technological capability, although low levels of internal embeddedness. Thus, our second conjecture is that R&D subsidiaries set up as part of JVs are less likely to become embedded in the MNE's internal network and to be considered capable of executing a competence-creating mandate. We hope that future empirical work on competence-creating subsidiaries will test these arguments more rigorously, focusing on the selection issues implicit in the choice of competence-creating subsidiaries. Our case study shows that technological capability and local environmental factors are not the only factors influencing a competence creation mandate s— the mode of entry and the effectiveness of HQ strategy may also influence a subsidiary's competence creation role.