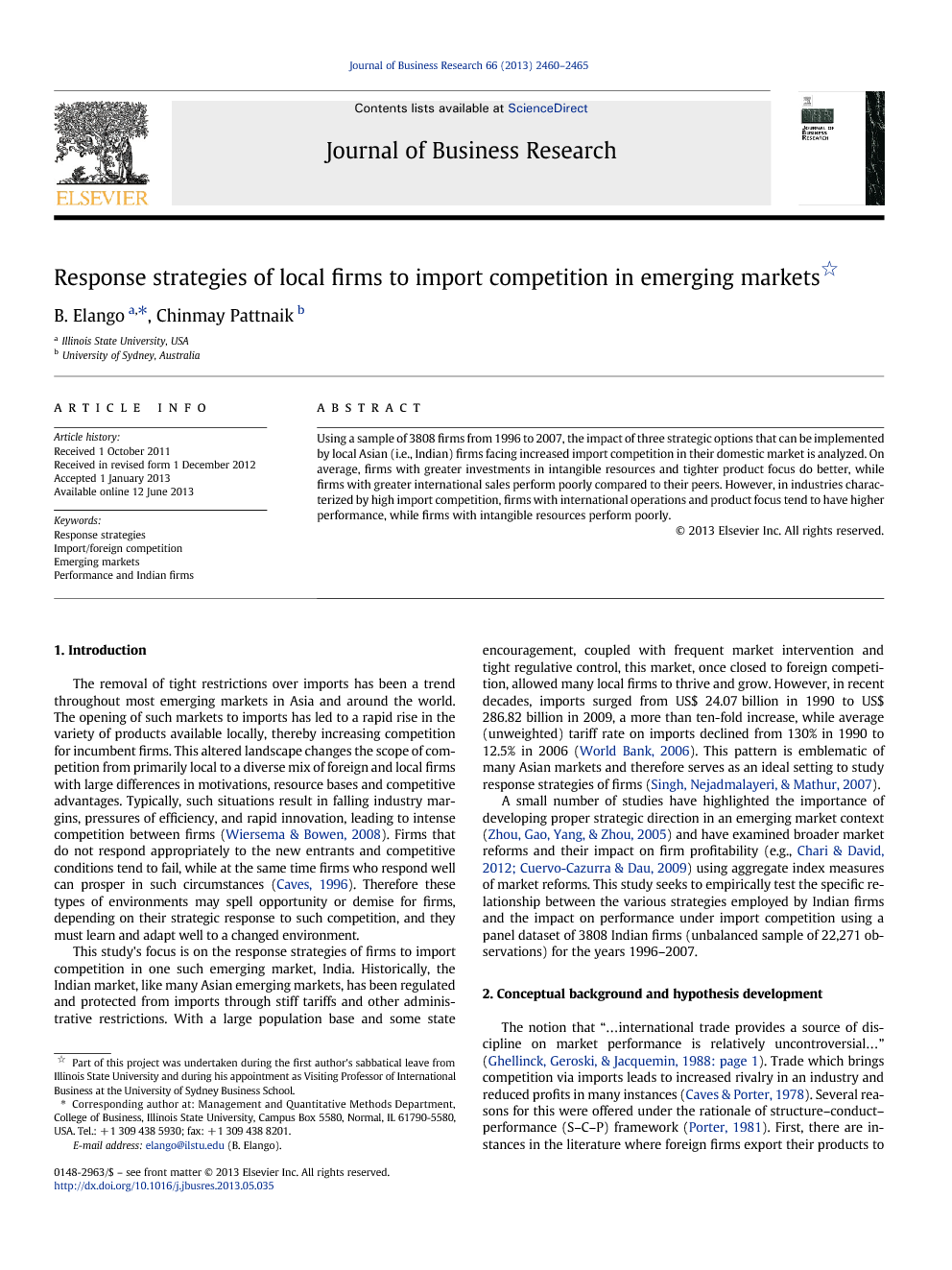 Using a sample of 3808 firms from 1996 to 2007, the impact of three strategic options that can be implemented by local Asian (i.e., Indian) firms facing increased import competition in their domestic market is analyzed. On average, firms with greater investments in intangible resources and tighter product focus do better, while firms with greater international sales perform poorly compared to their peers. However, in industries characterized by high import competition, firms with international operations and product focus tend to have higher performance, while firms with intangible resources perform poorly.

The removal of tight restrictions over imports has been a trend throughout most emerging markets in Asia and around the world. The opening of such markets to imports has led to a rapid rise in the variety of products available locally, thereby increasing competition for incumbent firms. This altered landscape changes the scope of competition from primarily local to a diverse mix of foreign and local firms with large differences in motivations, resource bases and competitive advantages. Typically, such situations result in falling industry margins, pressures of efficiency, and rapid innovation, leading to intense competition between firms (Wiersema & Bowen, 2008). Firms that do not respond appropriately to the new entrants and competitive conditions tend to fail, while at the same time firms who respond well can prosper in such circumstances (Caves, 1996). Therefore these types of environments may spell opportunity or demise for firms, depending on their strategic response to such competition, and they must learn and adapt well to a changed environment. This study's focus is on the response strategies of firms to import competition in one such emerging market, India. Historically, the Indian market, like many Asian emerging markets, has been regulated and protected from imports through stiff tariffs and other administrative restrictions. With a large population base and some state encouragement, coupled with frequent market intervention and tight regulative control, this market, once closed to foreign competition, allowed many local firms to thrive and grow. However, in recent decades, imports surged from US$ 24.07 billion in 1990 to US$ 286.82 billion in 2009, a more than ten-fold increase, while average (unweighted) tariff rate on imports declined from 130% in 1990 to 12.5% in 2006 (World Bank, 2006). This pattern is emblematic of many Asian markets and therefore serves as an ideal setting to study response strategies of firms (Singh, Nejadmalayeri, & Mathur, 2007). A small number of studies have highlighted the importance of developing proper strategic direction in an emerging market context (Zhou, Gao, Yang, & Zhou, 2005) and have examined broader market reforms and their impact on firm profitability (e.g., Chari and David, 2012 and Cuervo-Cazurra and Dau, 2009) using aggregate index measures of market reforms. This study seeks to empirically test the specific relationship between the various strategies employed by Indian firms and the impact on performance under import competition using a panel dataset of 3808 Indian firms (unbalanced sample of 22,271 observations) for the years 1996–2007.

This study's primary focus is to understand the impact of response strategies of firms facing import competition. Using the S–C–P paradigm as framework, it tested for resource-based, transaction cost and competitive dynamics perspectives with variables to incorporate the embedded societal factors relevant to Asian firms (Bruton & Lau, 2008). While this study is specific to the Asian context, several implications are appropriate in other emerging markets. The discussion and implications in this section are thus presented in a broader background. Consistent with many studies on import competition, findings indicate that import competition does result in reduced performance for firms. Therefore, firms need to recognize this impact and strategize accordingly. Using resource-based, transaction-cost and competitive dynamics reasoning, this study tested three hypotheses in terms of a firm's strategic response. Findings indicate that the impact of these strategies vary in effectiveness during import competition. While firms with a tighter product focus and international operations tend to perform better under import competition, firms with increased intangible resources seem to do worse under import competition. The role of resources in enhancing performance is well accepted in the literature, under the aegis of the resource-based view of the firm. Findings of the study also support this contention with clear positive loadings in Models 2 and 3. However, under import competition, findings indicate that firms with higher investments in intangible resources have a negative relationship with performance. As noted earlier, this finding is quite opposite to what was proposed in Hypothesis 1. Therefore, studies in the literature on intangible resources and performance differences were reviewed to understand the underlying phenomenon and better explain this study's findings. Villalonga (2004) reports that intangible resources play an effective role in sustaining a firm's competitive advantage (as one would predict with RBV of the firm). However, she also finds that intangible resources can lock firms into persistent disadvantages, due to “core rigidities” (Leonard-Barton, 1992) within the organization. As a result, the methodology employed in Villalonga (2004; page 213) has been borrowed and adapted to this study by splitting the sample into two groups. One group consists of firms who were below-average performers (n = 8788) and the other above-average performers (n = 11,233). Model 3 (full model in Table 2) was repeated on both samples, and the results are reported in Table 3. In this analysis, the statistical results reported for the below-average performance sample is consistent with the full sample results of Model 3 reported in Table 2. However, this is not case for the above-average performers. The interaction term (intangible resources ∗ import competition) which loaded negative turned positive, though statistically insignificant. To a certain extent, this finding offers some insights for why a negative relationship is found in industries with high import competition. Even with limited evidence, the possibility exists that in industries with high import competition, some firms could be locked in with resources that are not suitable for the changed environment and therefore are finding their investments in intangibles not paying off.