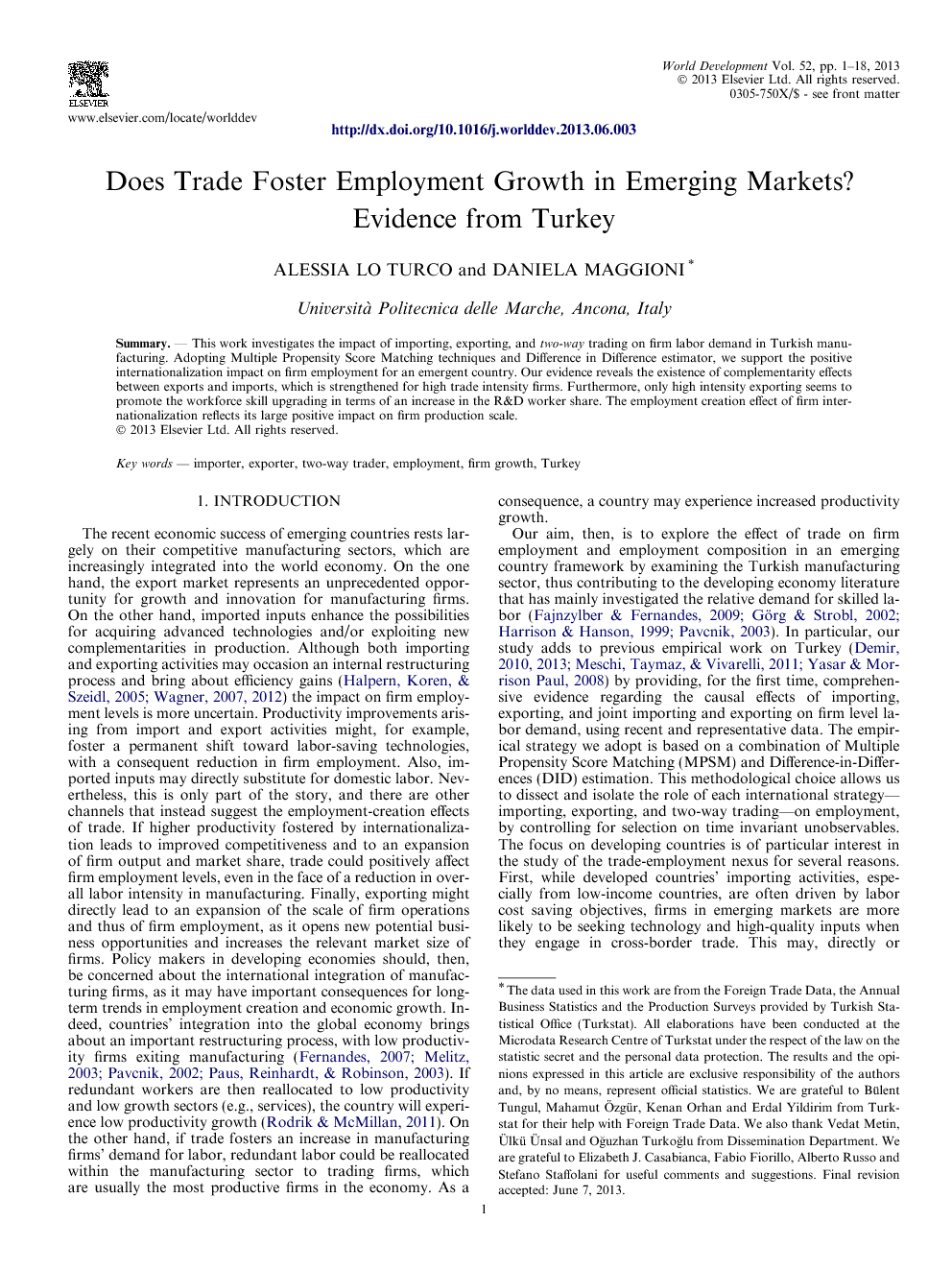 This work investigates the impact of importing, exporting, and two-way trading on firm labor demand in Turkish manufacturing. Adopting Multiple Propensity Score Matching techniques and Difference in Difference estimator, we support the positive internationalization impact on firm employment for an emergent country. Our evidence reveals the existence of complementarity effects between exports and imports, which is strengthened for high trade intensity firms. Furthermore, only high intensity exporting seems to promote the workforce skill upgrading in terms of an increase in the R&D worker share. The employment creation effect of firm internationalization reflects its large positive impact on firm production scale.

With this paper, we have contributed to the scant literature that exists on the employment consequences of developing country firms’ internationalization strategies. Contrary to previous empirical studies, mainly focused on the impact of imports on the ratio of white to blue collar workers, we have analyzed overall firm employment and the composition of the labor force in terms of the ratio of R&D workers to non-R&D workers. We have, for the first time, simultaneously investigated firm export and import activities and isolated and compared the impact of each of these trade strategies and of their joint adoption in an MPSM framework. Our results highlight that the penetration of foreign markets and the acquisition of foreign inputs have similar sizable impacts on domestic labor demand. However, simultaneously entering the export and import markets delivers the highest employment effect in the year of entry and in subsequent years, suggesting complementarity between the two strategies. The investigation of trade intensity reveals that the positive effects on labor demand hold, regardless of a firm’s degree of involvement in foreign markets. Firms entering both export and import markets with high intensity, however, experience higher employment growth. Finally, only high intensity exporting leads to an increase in the share of R&D employees, confirming the role of trade as a driver of innovation. Our results do not support the notion that employment losses result from ongoing international economic integration. On the contrary, within the stagnant Turkish labor market, firm trade activity positively affects manufacturing employment and may counterbalance other factors that negatively affect it. More importantly, we show that entry into foreign markets, whether the import or the export market, leads to significant increases in a firm’s scale of operations. It follows that internationalization provides firms with higher growth prospects, representing a fundamental channel for employment creation. Future research should seek to provide more cross-country evidence regarding the consequences for labor demand of firm involvement in global networks in developing countries. Such countries usually have in common high unemployment rates and thus it is important to understand whether the experience of Turkey is representative of other economies at the same stage of development. Policy makers in emerging economies should therefore seek to enhance firm involvement in foreign markets, as it represents a powerful tool of firm growth. Exploration of other features of the ongoing global integration process, such as the role of domestic and foreign multinational firms, is an additional interesting line of enquiry.