عنوان انگلیسی
Do barriers to export vary for born globals and across stages of internationalization? An empirical inquiry in the emerging market of Turkey
دانلود فوری مقاله + سفارش ترجمه 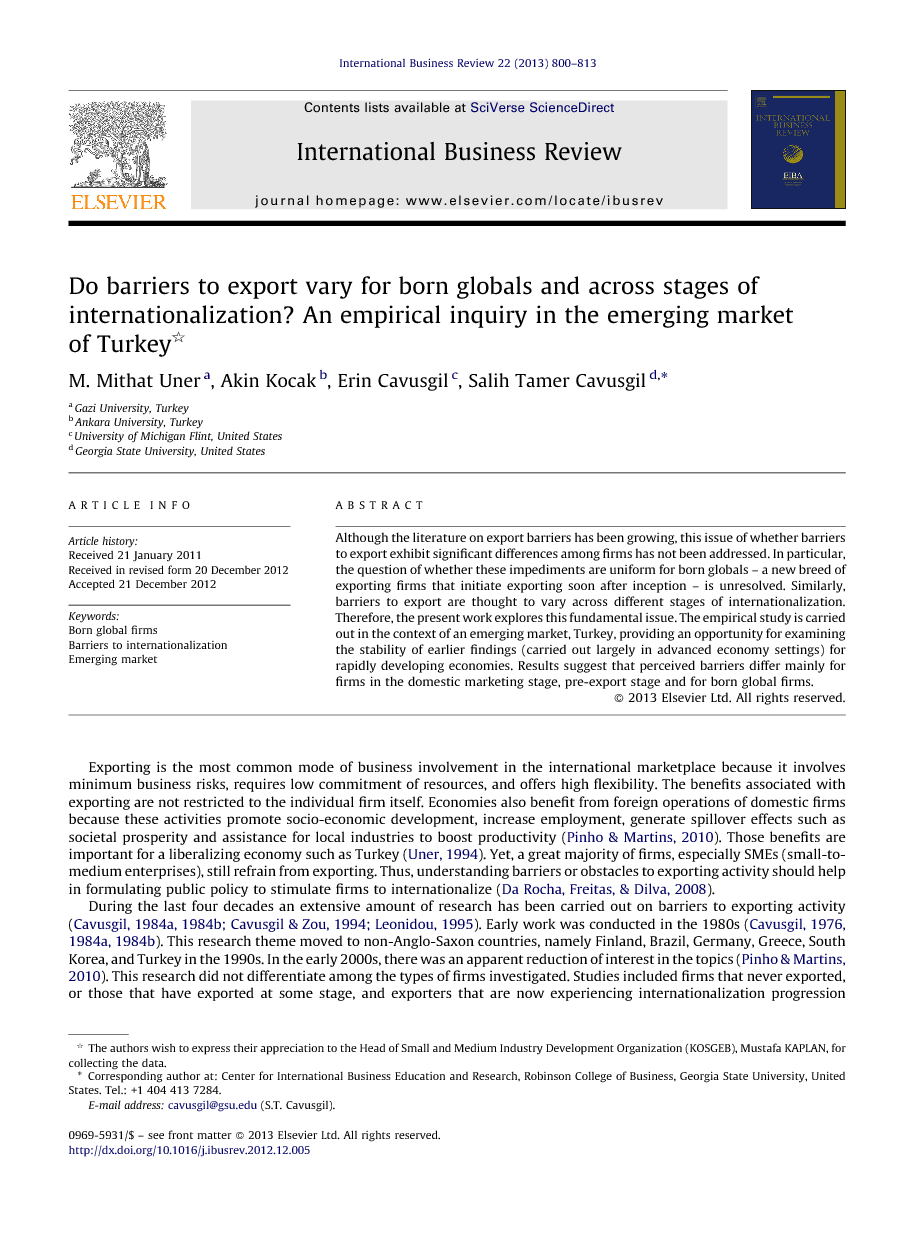 Although the literature on export barriers has been growing, this issue of whether barriers to export exhibit significant differences among firms has not been addressed. In particular, the question of whether these impediments are uniform for born globals – a new breed of exporting firms that initiate exporting soon after inception – is unresolved. Similarly, barriers to export are thought to vary across different stages of internationalization. Therefore, the present work explores this fundamental issue. The empirical study is carried out in the context of an emerging market, Turkey, providing an opportunity for examining the stability of earlier findings (carried out largely in advanced economy settings) for rapidly developing economies. Results suggest that perceived barriers differ mainly for firms in the domestic marketing stage, pre-export stage and for born global firms.

Consistent with previous research, a number of significant differences in perception of barriers to export are found across internalization stages. Unlike previous research, this study examined born global firms together with internalization stages and found that main significant differences were among stage 1, stage 2, and among born global firms. After analyzing the results, we can conclude that export barriers have not varied from those conducted in the 1970s and 1980s as reported by Da Rocha et al. (2008). Tariff barriers and setting competitive prices have lost their importance. Earlier literature found that high tariff and non-tariff barriers were one of the important barriers. However, we found that these are only important in the pre-export stage. This might also result from liberalization of international trade. The major barriers faced by responding executives are procedural barriers. Altintas, Tokol, and Harcar (2007) found a similar result for Turkish SMEs. When we compare the Turkish case with New Zealand (Shaw & Darroch, 2004), Portuguese (Pinho and Martins, 2010), and Spanish (Suarez-Ortega, 2003) cases, Turkish firms perceive procedural and marketing barriers as the most important barriers, New Zealand firms perceived financial barriers to be the biggest barriers, and Portuguese firms perceive informational barriers as crucial barriers. Spanish firms also perceive informational barriers as the most important barriers. Kaleka and Katsikeas (1995) found that price competition in foreign markets is perceived to be the most important barriers. However, in this study we found that competitive price is not a barrier for Turkish firms. Since markets are becoming global, price difference between countries does not appear to be significant. Regarding attitudes toward exporting, we find that firms are not concerned about exporting as a costly activity. However Burton and Schlegelmilch (1987) found that non-exporters reveal a pessimistic attitude toward cost. This might be because transportation and communication challenges and costs are much more manageable now than in the past. We find that the challenge of gathering information from foreign markets is an important barrier to exporting for non-exporter firms, similar to the findings of Suarez-Ortega (2003). As export involvement increases, information barriers lose their importance. Since non-exporters lack direct experience, they might believe that gathering information from foreign markets is a difficult task. However Kedia and Chhokar (1986) found that information barriers are one of the biggest barriers of exporter firms. Regarding other barriers, identifying foreign business opportunities is one of the main challenges for active involvement firms. Shaw and Darroch (2004) found that this barrier is one of the biggest hurdles for non-exporters. Identifying foreign business opportunity barriers occurs in a proactive manner. Proactive firms continually search for opportunities as they realize their importance. With respect to procedural barriers, unfamiliar exporting procedures are important barriers for pre-export firms, experimental involvement firms and born global firms. However Sharkey et al. (1989) found that these barriers are more important for non-exporters and marginal exporters then active exporters. Regarding financial problems, we find that except for firms in stage 5, other firms are not concerned about working capital limitations. However, Shaw and Darroch (2004) found that limited financial resources are the greatest barriers for likely exporters. As Leonidou (2004) argues, engagement in export operations often requires extensive expenditures in researching overseas markets, visiting foreign customers, and in adapting the export marketing strategy. We find that developing products is a major concern for committed exporter firms. On the other hand, non-exporter firms and pre-exporter firms do not perceive product development as an important barrier. However, Morgan and Katsikeas (1997) found that product characteristics are a greater barrier for weak export intenders compared to strong export intenders and current exporter firms. As Leonidou (2004) argues, many small firms consider exporting a marginal business activity, whereby excess production can be absorbed. This results in a management attitude characterized by a reluctance to develop entirely new products for specific foreign market needs and wants. This problem becomes even more acute in view of the diversity of customer preferences across countries. Results suggest that procedural barriers are critical for all firms. However, Tesfom, Lutz, and Ghauri (2006) argued that SMEs in developing countries can solve some barriers by themselves, with the exception of lack of market information, the preparation of proper designs, and the fulfillment of minimum quantity requirements. Suarez-Ortega (2003) found that procedural barriers are the greatest barrier of non-exporter firms and perception of these barriers lessen while shifting to experimental exporter category. We find a similar result to that of Shaw and Dorrach (2004) on the lack of home government assistance/incentives. This is not the most significant barrier for the responding firms except the firms in stage 4. As Tesfom et al. (2006) also point out, firms probably resolve this type of challenge independently. Tesfom and Lutz (2006) show that there is a high similarity between the exporting problems faced by manufacturing firms in developed and developing countries. Our findings concur with those conducted in different countries. Various implications can be drawn from the results of this investigation that are of interest to public policy makers. Importantly, the findings suggest that perception of export barriers among SMEs vary among stages of internationalization as well as for born global SMEs. In order to reduce perceived export barriers by SMEs, policy makers should target SMEs based on their involvement in export activities. Given the findings of this study, particular emphasis should be given to marketing and procedural barriers for firms in stage 1. Particular consideration should be given to environmental, governmental, and informational barriers for firms in stage 4. In order to eliminate the perception of export barriers for born global firms, policy makers should focus on export procedures and communication problems of born global firms. Nevertheless, the current export assistance policy of Turkish agencies is mainly based on financial aid, especially financial support to attend international trade fairs. In addition, loans are awarded without any particular distinction among SMEs. Therefore, these policies need to be modified. Assistance programs should recognize varying needs, based on the actual experiences, capabilities, and resources of the firm.