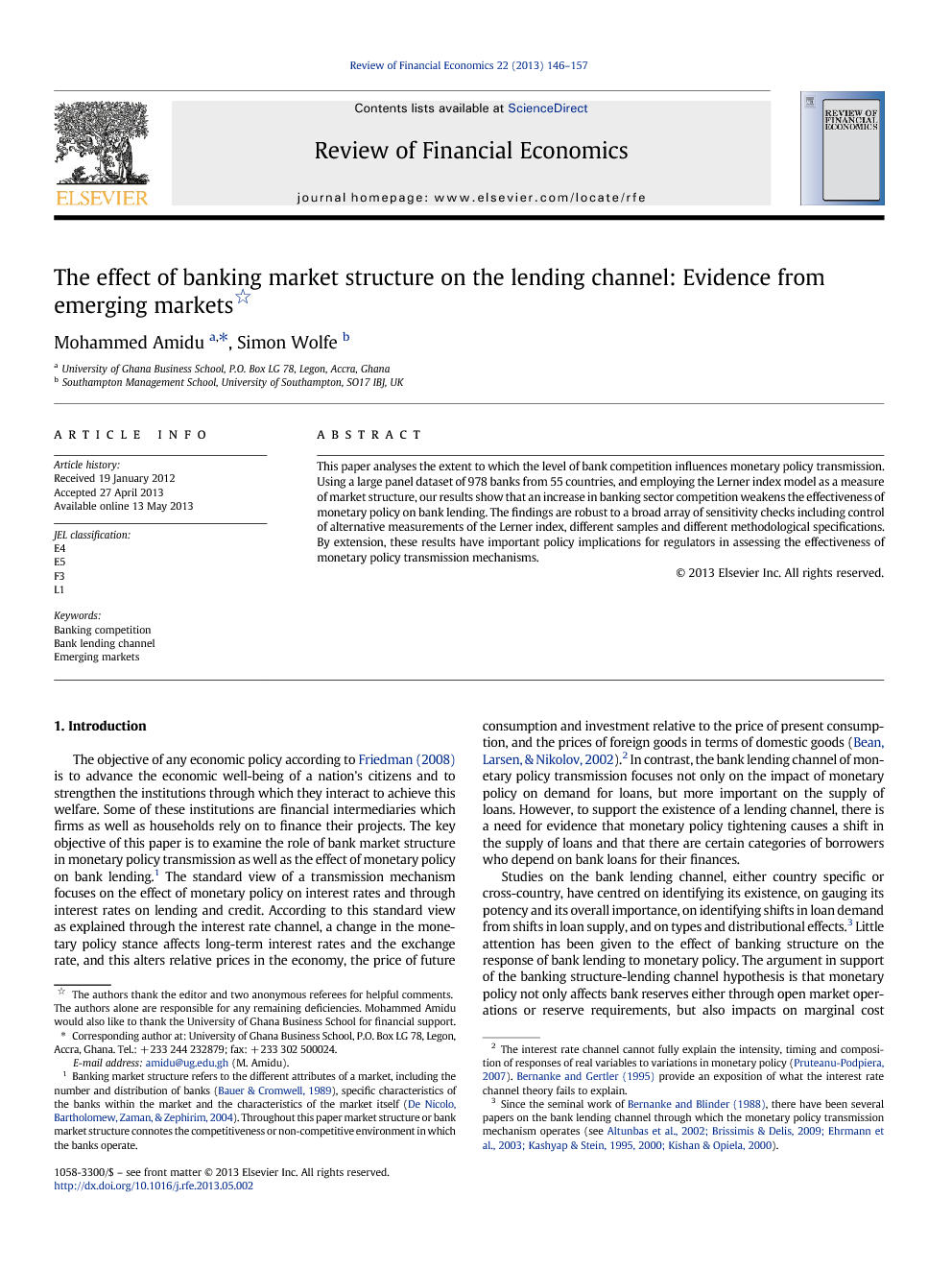 This paper analyses the extent to which the level of bank competition influences monetary policy transmission. Using a large panel dataset of 978 banks from 55 countries, and employing the Lerner index model as a measure of market structure, our results show that an increase in banking sector competition weakens the effectiveness of monetary policy on bank lending. The findings are robust to a broad array of sensitivity checks including control of alternative measurements of the Lerner index, different samples and different methodological specifications. By extension, these results have important policy implications for regulators in assessing the effectiveness of monetary policy transmission mechanisms.

This paper contributes to the empirical literature on the existence and importance of the relationship between bank market structure and bank lending channel for monetary policy transmission. The study is conducted in the context of emerging and developing economies. Two stage procedures are used: first is the construction of a Lerner index as a proxy for the degree of bank market power and second is to use the result to test its relationship with loan growth and the growth of core deposits. This is to investigate whether banks with market power are constrained by the availability of loanable funds which is a necessary condition for the existence of a bank lending channel. The findings are consistent in that the Lerner index interaction with deposits is negative and significant implying that developing country banks with market power are less sensitive to core deposits. Given these results, we investigate the effect of annual bank loan growth on bank market structure, on monetary policy stance and on the interactions between the degree of market power and monetary policy shocks. We find that the coefficient of the interaction term is significantly negative in all the estimations demonstrating the effect of the choice of monetary policy indicator on loan growth rates of banks. The core result is that banks in developing markets with a high degree of market power are less sensitive to changes in monetary shocks to supply loans. In less competitive banking environments, the effectiveness of monetary policy stance on the supply of loans is 12.40 times more than for larger banks and 1.87 times more than for liquid banks in mitigating the adverse effects of monetary policy shocks. In other words, in tightening monetary policy indicators, the authorities in developing countries will succeed in reducing the supply of bank loans if the banking environment is less competitive. Several variations are made to the model in order to test its robustness. This includes regional groupings, the alternative construction of Lerner index (funding-adjusted version), the model specifications and different estimation techniques. The results are similar to the canonical model and thus provide empirical evidence in support of the argument that bank market structure and the risk conditions influence the effect of the monetary policy transmission mechanism. Finally, this paper makes recommendations for policy makers: as the paper highlights the significance of the need for effective institutional and regulatory frameworks that can resolve and offset the negative consequences of further increases in bank market power on the effectiveness of monetary policy transmission through the bank lending channel. These regulatory and institutional measures are needed to deal with the effects of the current crisis on financial development as well as economic growth. Appendix A. Pair-wise correlation coefficient between selected variables Pair-wise correlation coefficient estimated on a sample of 978 banks across 55 countries during the period 2000–2007. * implies significant at 5% or more. Loan to assets ratio is used as a measure of bank loan portfolio. Securities are calculated as total securities divided by total assets and deposits to liabilities measures proportion of bank total deposit to total liabilities. Size is the natural log of total assets. Equity ratio measures the capitalization level of selected banks and liquidity is calculated as total liquid assets divided by total assets. Internal fund is the funds generated internally and measured as the sum of net profit before extraordinary items and loan loss provisions relative to bank loans at the end of the period. The degree of market power is proxied by the Lerner Index with the higher scores indicating a higher degree of pricing power. Z-score is defined as: Z = (ROA + E/TA)/σ(ROA), where ROA is the rate of return on assets, and E/TA is the total equity to total assets. Bad loans are the ratio of total non-performing loans to total loans. Short-term interest rate is included to capture the stance of monetary policy. The GDP growth accounts for the differences in economic development across countries. Inflation is the rate of inflation based on the CPI.