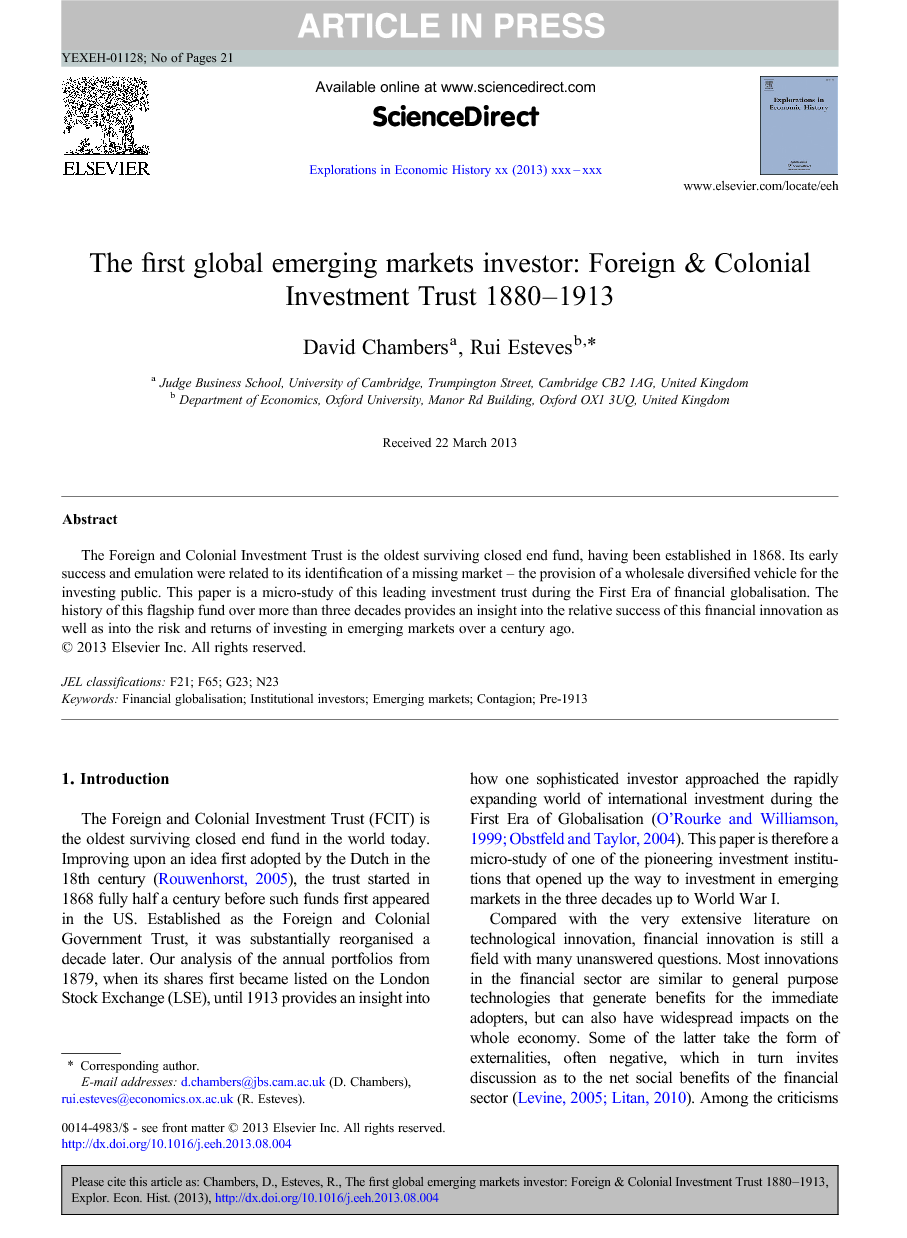 The Foreign and Colonial Investment Trust is the oldest surviving closed end fund, having been established in 1868. Its early success and emulation were related to its identification of a missing market – the provision of a wholesale diversified vehicle for the investing public. This paper is a micro-study of this leading investment trust during the First Era of financial globalisation. The history of this flagship fund over more than three decades provides an insight into the relative success of this financial innovation as well as into the risk and returns of investing in emerging markets over a century ago.

There could be no higher testament to FCIT's attractions than the fact that this was the only investment trust share which John Maynard Keynes included in the security portfolio he managed for his father before WW1. FCIT stands as the forerunner of a highly successful financial innovation, based on the idea of providing the average investor with the opportunity to invest in a globally diversified portfolio at an extremely low cost. Back in the late 19th century, when it would be too costly both in time and money for individual investors to try and replicate such a portfolio, this proved to be a highly attractive and convenient solution for the majority of the investment public. The investment trust structure permitted the FCIT to exploit the benefits of a long-term investment horizon and to pursue its buy-and-hold investment approach. This in turn allowed the board to make heavy investments in emerging market bonds and in the American continent in particular, an investment approach which paid off handsomely. The fund's NAV averaged returns in excess of British Consols and of the global ex-UK benchmark whilst also offering a better risk-return trade-off. The trust's deferred shares exceeded its NAV performance thanks to the leverage provided by the issue of preference shares. However, as our peer fund performance comparison showed, FCIT's performance whilst creditable was not particularly outstanding and there were other average trusts that also performed well. In one respect FCIT did appear to be outstanding and that was disclosure. Consequently, we were able to estimate the NAV of the underlying investments and showed that the level of discount to the NAV at which the deferred shares traded was not out of line with what investors a century later experienced and most probably reflected the exposure to illiquid securities in the portfolio. A straightforward comparison with today is offered by the Emerging Markets Composite Index (EMBI), launched in 1989 by J. P. Morgan, and now generally recognised as the emerging market debt benchmark. From inception in 1993 through the end of 2010, the EMBI returned 11.7% p.a. in US dollars compared to 8.6% for US Treasury 30-year Bonds was slightly lower at 15.8% versus 16.8% for the US long bond. Hence, in the modern era spanning a period of 17 years, emerging market debt generated a US dollar return of 3.1% p.a. in excess of US government bonds, a premium which is identical to that returned by FCIT over Consols in sterling pounds in the pre-WW1 era spanning a period almost twice as long. Moreover, the FCIT return premium was earned with much lower volatility, only 4.7% compared to EMBI volatility of 15.8% and US Treasury bond volatility of 16.8% in the recent past. As a result, the Sharpe Ratio was higher at 0.67 in the earlier period compared to 0.53 today. The success of the FCIT model was imitated first in Britain and then, after the war, in the US. This model created both followers and epigones. The latter exploited the closed end fund structure to pursue excessive leverage, speculative investments and even pyramiding. The greater risk taken on by these “financial” trusts inevitably resulted in more instability and greater failure rates than the original and more conservatively managed “average” trusts. Among the followers of the FCIT example were the other 37 trusts that not only survived the Barings crisis but remained in operation continuously until the War. In the US, closed end funds were subject to considerable criticism in the wake of the 1929 stock market crash and were superseded by the new open end mutual funds. The latter type of fund also came to dominate investment trusts in Britain through the remainder of the last century. This study on the origins and development of the investment trust cautions against overarching negative narratives of the closed end fund innovation drawing on the speculative excesses of the US during the 1920s or Britain in the 1880s.. Whilst the closed end fund structure was suffered from fluctuations in its discount to NAV, an added source of risk for the fund investor, at the same time it permitted average trust managers such as FCIT to undertake the patient buy-and-hold investment approach free from fund flow pressures and was therefore particularly suitable to a less liquid asset class such as emerging markets. Mauro et al. (2006) suggest that the institutionalisation of investment activity over the 20th century is crucial in explaining the greater incidence of emerging markets contagion in the Second Era compared to the First. However, the trading behaviour of FCIT during the two major financial crises of 1890 and 1907 qualifies this generalisation. The evidence suggests that the introduction of the investment trust did not necessarily come at the cost of greater contagion in emerging markets. The implication of this study is that not all investment institutions are created alike.