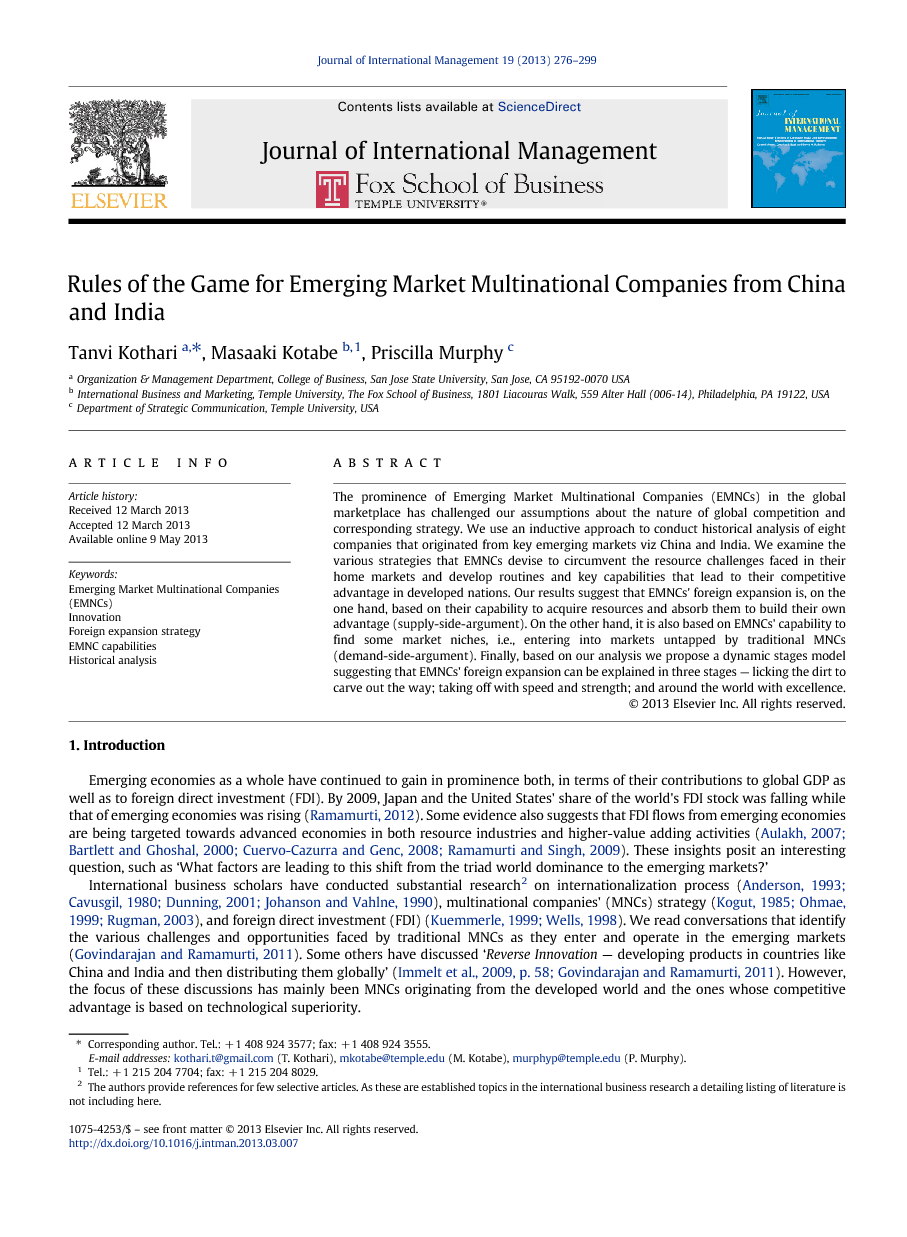 The prominence of Emerging Market Multinational Companies (EMNCs) in the global marketplace has challenged our assumptions about the nature of global competition and corresponding strategy. We use an inductive approach to conduct historical analysis of eight companies that originated from key emerging markets viz China and India. We examine the various strategies that EMNCs devise to circumvent the resource challenges faced in their home markets and develop routines and key capabilities that lead to their competitive advantage in developed nations. Our results suggest that EMNCs' foreign expansion is, on the one hand, based on their capability to acquire resources and absorb them to build their own advantage (supply-side-argument). On the other hand, it is also based on EMNCs' capability to find some market niches, i.e., entering into markets untapped by traditional MNCs (demand-side-argument). Finally, based on our analysis we propose a dynamic stages model suggesting that EMNCs' foreign expansion can be explained in three stages — licking the dirt to carve out the way; taking off with speed and strength; and around the world with excellence.

Accelerating growth in emerging economies and the simultaneous slowing down of developed economies have shined the spotlight on consumers' needs in emerging markets and the EMNCs. Compared to the flow of innovations and technology from rich to poor countries, flows in the opposite direction are evolving. Our results suggest that the innovations by the EMNCs are increasingly finding their way to the rest of the world, including developed economies. Although, the innovations by EMNCs are probably minuscule in number our historical analysis suggests that the innovative activity in emerging economies is much greater than it has ever been and that it is diffusing upward to developed nations. Given the relative newness of this issue, our claims here are relatively unpretentious. This research contributes to the extant literature in several ways. First, this study uses a historical and in-depth study design to completely understand the EMNCs' foreign expansion to developed nations unlike, a few existing studies that are based solely on the use of financial measures (Contractor et al., 2007 and Khanna and Rivkin, 2001). Second, prior research documents the EMNCs' ability to overcome institutional voids (Cuervo-Cazurra and Genc, 2008) to counter foreign multinationals both, in their local markets or in markets with similar institutional environments (Aulakh, 2007). We take this a step further to explain that EMNCs possess unique ‘lick the dirt’ capabilities that not only enable them to compete in similar institutional environments but empower them to be competitive in distant and developed institutional environments. Our arguments explain that despite the absence of non-market advantages EMNCs build capabilities to survive their rough institutional environments and scale-up to compete with MNCs not only in their domestic environments but also in developed nations. This literature tends to assume that distance always has a negative impact on the operations of the MNC abroad. However, the historical analysis presented here suggests that with the appropriate innovation capabilities and catch-up strategies EMNCs can overcome the distance and excel in the developed nation markets. This study also makes some significant contributions to the research methods used in international management studies by using computerized text analysis to uncover historical data about firms from emerging nations. Since the sample includes a mix of both service and manufacturing firms, the results of this study provide robust comparisons of the different strategies used by firms in the different industry and country level contexts, thus reaching more generalizable conclusions compared to some prior studies that are based on a single emerging market sample (Buckley et al., 2007, Chittoor et al., 2009 and Khanna and Palepu, 2006). A number of future research directions are suggested. First, given that the unit of analysis in this paper is eight cases, future research might focus on a larger number of EMNCs to empirically test the propositions made through the inductive analysis. Second, multiple levels of factors some macro, while others micro, influence strategically important decisions such as EMNCs' participation in the global marketplace. While the historical-analysis in this paper provides us with largely accurate macro information, future researches can obtain the micro level information by methods, such as field studies, participant observations, structured or semi structured interviews, and process models. Given that, due to its exploratory nature this study focuses only on successful EMNCs. Further, researchers can attempt to understand the innovation process by focusing on both large and small firms to enhance the explanations provided in this paper. This study briefly touches upon the interaction between EMNCs and MNCs in developed nations. It would be interesting to further study a broader sample set of interactions of these organizations at different stages of the innovation process.