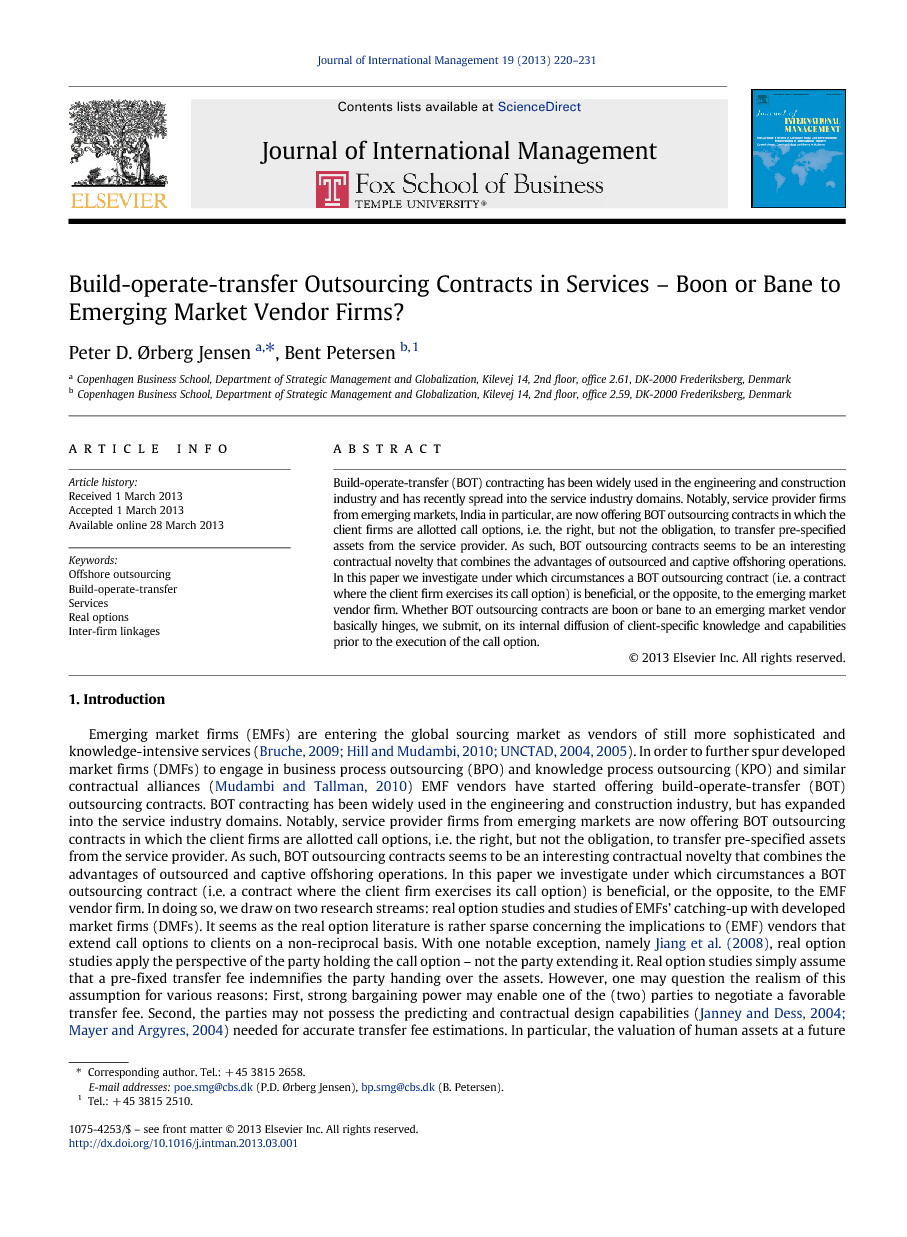 In this paper we have outlined a model that includes a range of factors, and the causal relations between them, which influence the outcome of BOT contracts for vendor EMFs. Seen from the perspective of the vendor EMF, what might the firm do in order to exploit the potential benefits of BOT contracts and avoid the potential risks? Since the outcome is partially influenced by exogenous factors, it is not entirely in the hands of the vendor EMF managers to steer the firm clear of the risks. Nevertheless, an awareness of the influence from the surrounding market and institutional factors, and the resulting recognition of when a BOT contract might be beneficial, will provide a greater clarification for the decision of whether to enter, respectively not to enter, into a BOT contract. In this respect we have argued above that a very competitive or contracting market situation makes the bargaining position in the contracting phase relatively more difficult for the vendor EMF. At the outset of the collaboration, it is preferable for a vendor EMF to avoid making client-specific investments. However, in such market situations this may in practice not always be possible. Incorporating a BOT call option in the outsourcing contract, and taking on obligations that, in effect, are client-specific investments, may be means to getting the client to sign on the outsourcing contract in the first place. For the vendor EMF, a contract that entails client-specific investments (if the call option is exercised) may therefore make commercial sense in the short term. The challenge is to also make it a viable strategy in the longer term. In contracts where the vendor EMF offers, or agrees, to undertake client-specific investments, we consider in particular three aspects to be of strategic importance for the vendor EMF. First, the vendor EMF should try to ensure that the fee for the transferred assets equals the value of their best alternative use. This is, however, not a simple task, given the difficulty of pricing human skills and knowledge assets described earlier. For the vendor EMF, such a price estimation also includes the opportunity costs of letting vendor EMF staff be transferred to the client, instead of continuing their efforts within the boundaries of the vendor EMF. If the vendor EMF does not possess the internal contracting capabilities to do this, then the assistance from external advisors is recommended. Second, the timing of the transfer of personnel to the client is of importance. The vendor EMF should aim to avoid transfer of human assets to the client until the client-specific investments are written off. The third aspect also concerns the timing of the transfer to the client. The vendor EMF should avoid the transfer of human assets until the knowledge transfer from the EMF project group to the wider EMF organization is completed. As we have described in the scenarios, the effectuation of knowledge transfer to the wider EMF is crucial precondition and enabler for the realization of the potential benefits in BOT contract and transfer, in accordance with the linking-learning-levering processes described in the Catching-Up Scenario. This, however, requires that the vendor EMF has an effective knowledge management and transfer system in place in the organization. If this is not the case, then a BOT contract and transfer is in any case a high-risk strategy with a greater risk of “bane” than “boon” for the vendor EMF. An additional finding, however, is that our research for this study indicates that empirical evidence is difficult to find and get access to, especially evidence concerning the potentially negative consequences of BOT contracts for vendor EMFs. Finding empirical evidence thus remains a challenge for future research on the subject.