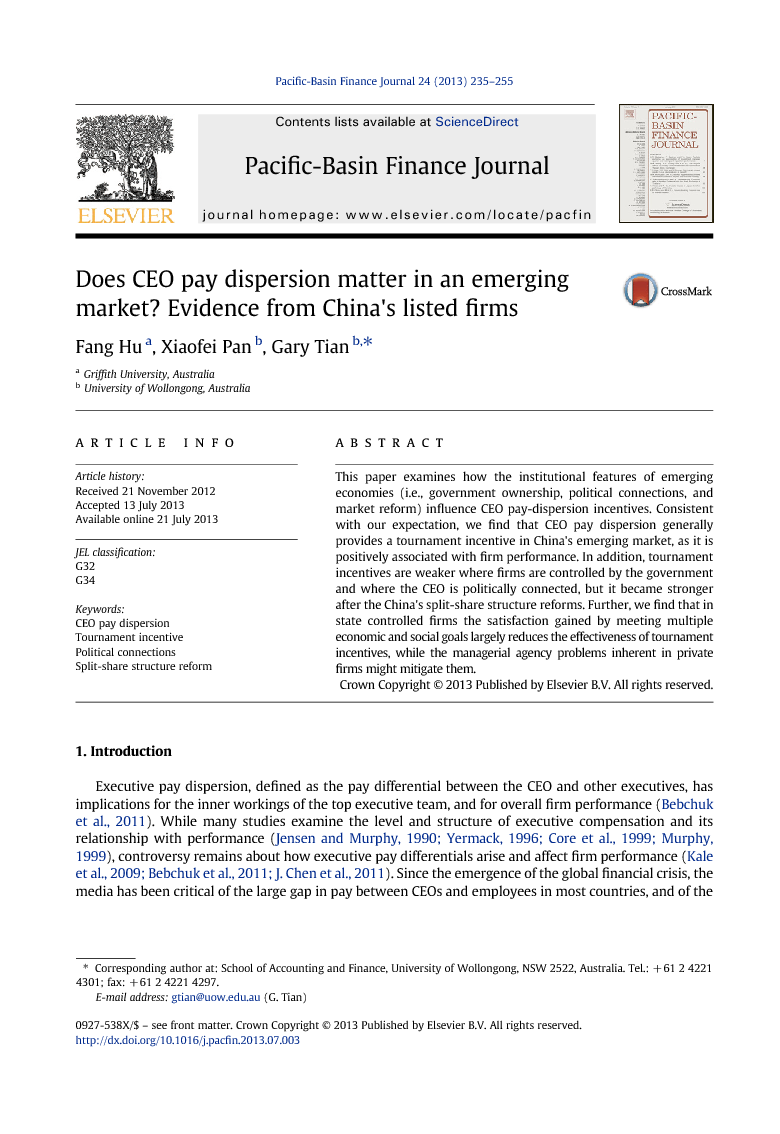 This paper examines how the institutional features of emerging economies (i.e., government ownership, political connections, and market reform) influence CEO pay-dispersion incentives. Consistent with our expectation, we find that CEO pay dispersion generally provides a tournament incentive in China's emerging market, as it is positively associated with firm performance. In addition, tournament incentives are weaker where firms are controlled by the government and where the CEO is politically connected, but it became stronger after the China's split-share structure reforms. Further, we find that in state controlled firms the satisfaction gained by meeting multiple economic and social goals largely reduces the effectiveness of tournament incentives, while the managerial agency problems inherent in private firms might mitigate them.

The issue relating to the pay gap between CEOs and other executives in the top management team has recently received a considerable amount of attention. An appropriate pay scheme is essential to the success of SOE reform. Information about executive compensation in China's listed firms has been disclosed since 1998, and more completely since 2005. We have taken advantage of this information to investigate pay dispersion and its effect on firm performance in China's listed firms using a sample ranging from 2005 to 2010. Consistent with tournament theory and previous research (Kale et al., 2009 and Chen et al., 2011a), we find that pay dispersion is positively related to firm performance. We also find that the positive association between pay dispersion and firm performance is weaker in SOEs than in privately controlled firms, because SOEs are required to achieve multiple economic and social goals such as the remittance of tax to governments and alternative incentive schemes. Moreover, the relationship between pay dispersion and firm performance is weakened by CEOs' political connections, and we find that this less-positive effect is significant in private firms. We specifically find that the positive relationship between CEO pay dispersion and firm performance has been strengthened since the split-share structure reform, but the positive effect of this reform is weaker in SOEs than in private firms. Furthermore, we also find that a significantly positive effect of CEO pay dispersion on stock returns emerged after the split-share structure reform. We provide evidence that state ownership and political connection exert a value-destroying effect by weakening the positive effect of tournament incentives, while market reform improves economic efficiency by strengthening tournament incentives. We argue that in SOEs the satisfaction gained from multiple economic and social goals, such as the remittance of tax imposed by governments, has largely reduced the effectiveness of tournament incentives; moreover, in family-controlled firms where the CEO is also the family owner, the tournament theory does not hold at all. Overall, our results suggest that in an emerging market, a Chinese firm's institutional features, such as state ownership and political connections, play important roles in the effect of tournament incentives on motivating executives.