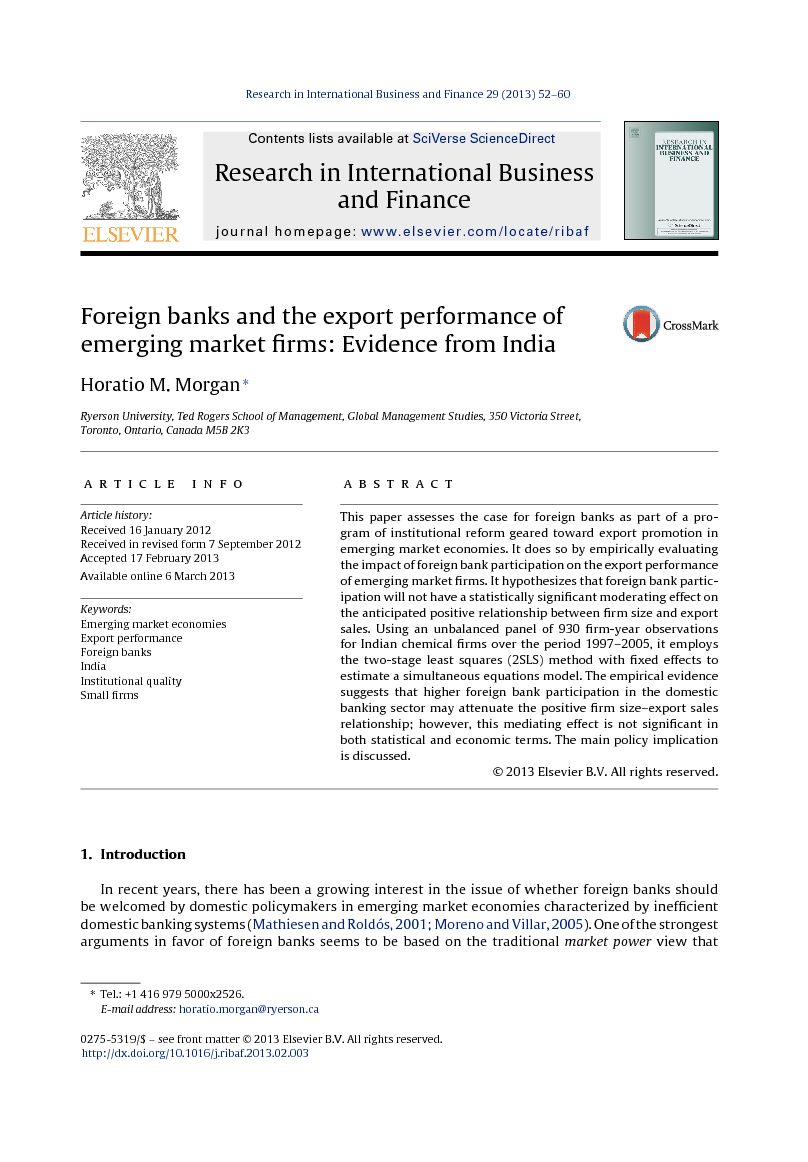 This paper assesses the case for foreign banks as part of a program of institutional reform geared toward export promotion in emerging market economies. It does so by empirically evaluating the impact of foreign bank participation on the export performance of emerging market firms. It hypothesizes that foreign bank participation will not have a statistically significant moderating effect on the anticipated positive relationship between firm size and export sales. Using an unbalanced panel of 930 firm-year observations for Indian chemical firms over the period 1997–2005, it employs the two-stage least squares (2SLS) method with fixed effects to estimate a simultaneous equations model. The empirical evidence suggests that higher foreign bank participation in the domestic banking sector may attenuate the positive firm size–export sales relationship; however, this mediating effect is not significant in both statistical and economic terms. The main policy implication is discussed.

This paper empirically evaluates the magnitude of the potential mediating effect of foreign bank participation on the anticipated positive firm size–export sales relationship using panel data on Indian chemical firms. The empirical evidence suggests that higher foreign bank participation in the domestic banking sector may attenuate the positive firm size–export sales relationship; however, this mediating effect is not significant in both statistical and economic terms. This finding has an important implication for policymakers in emerging market economies such as India, among others. To the extent that domestic policymakers are looking to relax the financial constraint on the international expansion of indigenous firms almost exclusively through policies that welcome foreign banks, this study casts doubt on the effectiveness of such policies; that is, the evidence suggests that foreign banks are unlikely to enhance the capacity of emerging market firms to serve foreign markets through better access to bank credit, all else being equal. Yet, in so far as emerging market exporters are underserved by foreign banks because of their informational opacity, emerging market governments that welcome foreign banks may generally encourage them to serve indigenous firms by implementing complementary policies that either improve the latter's transparency, or circumvent their inherently risky credit profile. As a practical matter, however, it may be worthwhile for domestic policymakers to place greater priority on workable initiatives that may generally help indigenous firms to access bank credit despite their risky credit profile. Among the potential policy solutions along this line, a “reverse factoring” scheme is worth considering (Klapper, 2006). Unlike alternative schemes that tend to call upon fiscally constrained emerging market governments to offer explicit or implicit loan guarantees, reverse factoring is predicated on self-help. That is, the primary goal is to help emerging market firms to obtain working capital on the basis of unpaid invoices generated from credit sales made to relatively large, creditworthy clients at home and abroad. In principle, if an emerging market exporter had sold goods on credit to well-established international corporations, reverse factoring would enable this exporter to sell the unpaid invoices to a third party (i.e. a factor) in exchange for a sum of money that is normally less than the face value of the invoice (i.e. discounted value). If emerging market governments allow foreign banks to provide factoring services along this line, such transactions are expected to take place because they are predicated on the creditworthiness of international firms that just happen to be the clients of emerging market exporting firms. Thus, for emerging market economies characterized by weak credit market information infrastructure, financial policies that encourage foreign banks to provide reverse factoring services may circumvent one of the most formidable institutional barriers that seem to partially block credit flows to indigenous exporting firms. At the same time, if emerging market governments are able to successfully implement a broader set of policies that substantially improve the credit information infrastructure, and the legal and regulatory framework needed to support factoring on a larger scale, then small emerging market exporters may be better placed to secure working capital financing from foreign banks by using a larger share of what may very well be substantial amounts in uncollected accounts receivable.