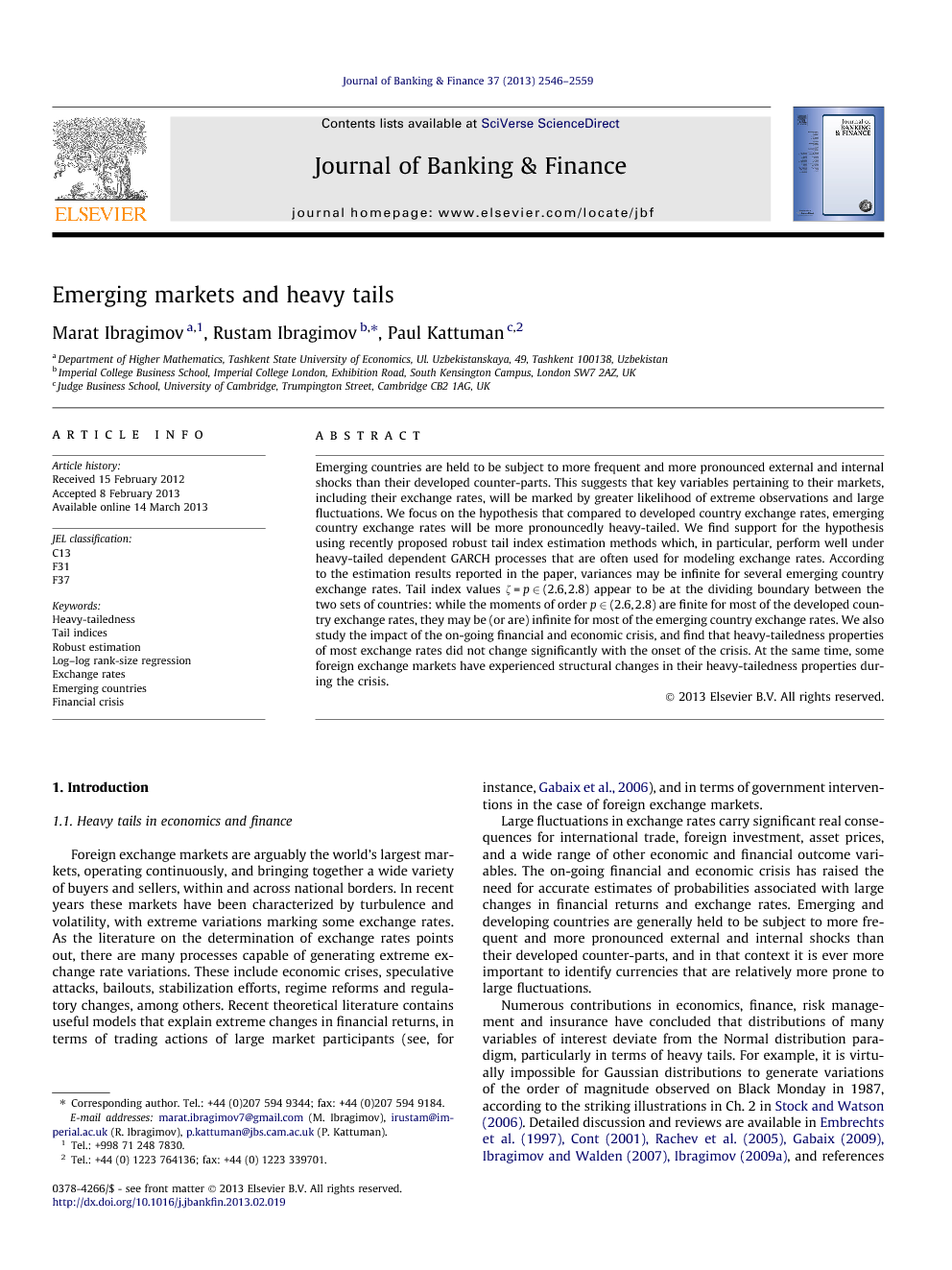 Foreign exchange markets are arguably the world’s largest markets, operating continuously, and bringing together a wide variety of buyers and sellers, within and across national borders. In recent years these markets have been characterized by turbulence and volatility, with extreme variations marking some exchange rates. As the literature on the determination of exchange rates points out, there are many processes capable of generating extreme exchange rate variations. These include economic crises, speculative attacks, bailouts, stabilization efforts, regime reforms and regulatory changes, among others. Recent theoretical literature contains useful models that explain extreme changes in financial returns, in terms of trading actions of large market participants (see, for instance, Gabaix et al., 2006), and in terms of government interventions in the case of foreign exchange markets. Large fluctuations in exchange rates carry significant real consequences for international trade, foreign investment, asset prices, and a wide range of other economic and financial outcome variables. The on-going financial and economic crisis has raised the need for accurate estimates of probabilities associated with large changes in financial returns and exchange rates. Emerging and developing countries are generally held to be subject to more frequent and more pronounced external and internal shocks than their developed counter-parts, and in that context it is ever more important to identify currencies that are relatively more prone to large fluctuations. Numerous contributions in economics, finance, risk management and insurance have concluded that distributions of many variables of interest deviate from the Normal distribution paradigm, particularly in terms of heavy tails. For example, it is virtually impossible for Gaussian distributions to generate variations of the order of magnitude observed on Black Monday in 1987, according to the striking illustrations in Ch. 2 in Stock and Watson (2006). Detailed discussion and reviews are available in Embrechts et al., 1997, Cont, 2001, Rachev et al., 2005, Gabaix, 2009, Ibragimov and Walden, 2007 and Ibragimov, 2009a, and references therein. This stream of literature goes back to Mandelbrot (1963) who pioneered the study of heavy-tailed distributions in economics and finance (see also Fama, 1965, and the papers in Mandelbrot (1997)). The potential for large changes in random variables is characterized by the probability mass in the tails of their distributions. In models involving a heavy-tailed risk, return or foreign exchange rate, the variable of interest r is usually assumed to have a distribution with power tails, such that: equation(1) View the MathML sourceP(r>x)∼C1xζ1, Turn MathJax on equation(2) View the MathML sourceP(r<-x)∼C2xζ2, Turn MathJax on ζ1, ζ2 > 0, C1, C2 > 0, as x → + ∞, that implies, with ζ = min (ζ1, ζ2), equation(3) View the MathML sourceP(|r|>x)∼Cxζ, Turn MathJax on C > 0, as x → + ∞ (here and throughout the paper, f(x) ∼ g(x) as x → +∞ means that View the MathML sourcelimx→+∞f(x)g(x)=1). The parameters ζ, ζ1 and ζ2 in (3), (1) and (2) are referred to, respectively, as the tail index (or the tail exponent), the right tail index and the left tail index of the distribution of r. These indices characterize the heaviness (the rate of decay) of the tails of power law distributions (1), (2) and (3). The greater the probability mass in the tails, the smaller the tail index parameters, and vice versa. Thus smaller values of ζ correspond to larger likelihood of outliers in realizations of the variable. The models (1), (2) and (3) allow one to determine the quantiles of variable r that correspond to small tail probability levels, and the corresponding loss exceedance probabilities and risk measures including the value at risk (VaR) and the expected shortfall. Differences between markets in their tail index estimates point to differences in risk that they carry. The heavy-tailedness property is of key interest to risk managers, financial regulators, financial stability analysts and policy makers concerned with the likelihood of extreme values in financial and exchange rate returns. Tail indices ζ characterize the maximal order of finite moments of the variable r considered, as discussed in Appendix. In particular, the fourth moments and thus the kurtosis of the variable are finite if and only if ζ > 4; the variances of r are finite if and only if ζ > 2; and the means of r are finite if and only if ζ > 1. The tail index can be regarded as being infinite for normal distributions where the decay to zero of distributional tails in (1), (2) and (3) is faster than exponential, and thus the moments of an arbitrary order are finite. Many recent studies have found that in developed market economies, tail indices in the heavy-tailed model (3) for financial returns and exchange rates typically lie in the interval ζ ∈ (2, 5) (see, among others, Loretan and Phillips, 1994, Gabaix et al., 2006, Ibragimov and Walden, 2007, Gabaix, 2009 and Ibragimov, 2009a, and references therein). The estimates ζ ∈ (2, 4) imply that the return variables have finite variances and finite first moments; however, their fourth moments are infinite. Finiteness of first moments is of key importance for the optimality of diversification in the value at risk framework and for the robustness of a number of economic models for the variable of interest (see Ibragimov and Walden, 2007, Ibragimov, 2009a and Ibragimov et al., 2009). The finiteness of variances is crucial for the applicability of classical statistical and econometric approaches, including regression and least squares methods, to economic and financial variables of interest. The problem of potentially infinite fourth moments of economic and financial time series needs to be taken into account when analysing them using autocorrelation-based methods and related inference procedures (see, among others, the discussion in Granger and Orr (1972), and in a number of more recent studies, e.g., Ch. 7 in Embrechts et al., 1997 and Cont, 2001, and references therein).

The results of our robust, comparative, assessment of heavy-tailedness properties of exchange rates indicate that the exchange rates of emerging and developing countries are typically more heavy-tailed than those of developed countries. The implication that several emerging countries may have infinite variance exchange rate distributions highlight the need for care in applying economic and financial models, diversification analysis, and econometric and statistical inference methods. Extending the list of currencies covered by our analysis to those of Latin American, Middle East and African countries will be of much interest. It should be revealing to examine tail index estimates for a larger number of cross exchange rates, relative to countries’ largest trading partners, and relative to neighbors in the same geographical region, e.g., Asia, Latin America. It is likely that heavy-tailedness may be less marked, due to similarity of underlying economic fundamentals and due to trade flow concentration. Developing structural models that explain the presence of heavy tails in emerging country exchange rates and the factors (including macroeconomic and institutional variables) that affect them would be an important direction for further research (see Gabaix et al., 2006, and the discussion in Section 4). This will require estimates of tail indices for size distributions of market participants, and of trading volume distributions. Cross-country analysis of relationships between tail index estimates and macro economic variables that are proximate to government intervention in foreign exchange markets should be interesting. Similar estimates for export and import volumes and their concentration across industries and trade partners are also important. Application of other estimation and inference approaches, including the methods for adaptive selection of the tail sample fraction used in inference on heavy-tailedness (see Section 4.7 in Beirlant et al. (2004)), small sample analogues of Hill’s estimates developed in Huisman et al. (2001) and other robust econometric and statistical procedures under heavy tails such as the t-statistic based robust inference methods proposed in Ibragimov and Müller (2010) to this research issue would be of interest. Further analysis of structural breaks in the heavy-tailedness of exchange rates, using for example, tests developed in Quintos et al. (2001) will be useful. Going beyond the on-going economic and financial crisis, it would be of interest to study the impacts of changes in currency regimes, and of other shocks (such as the 1998 Russian financial crisis).