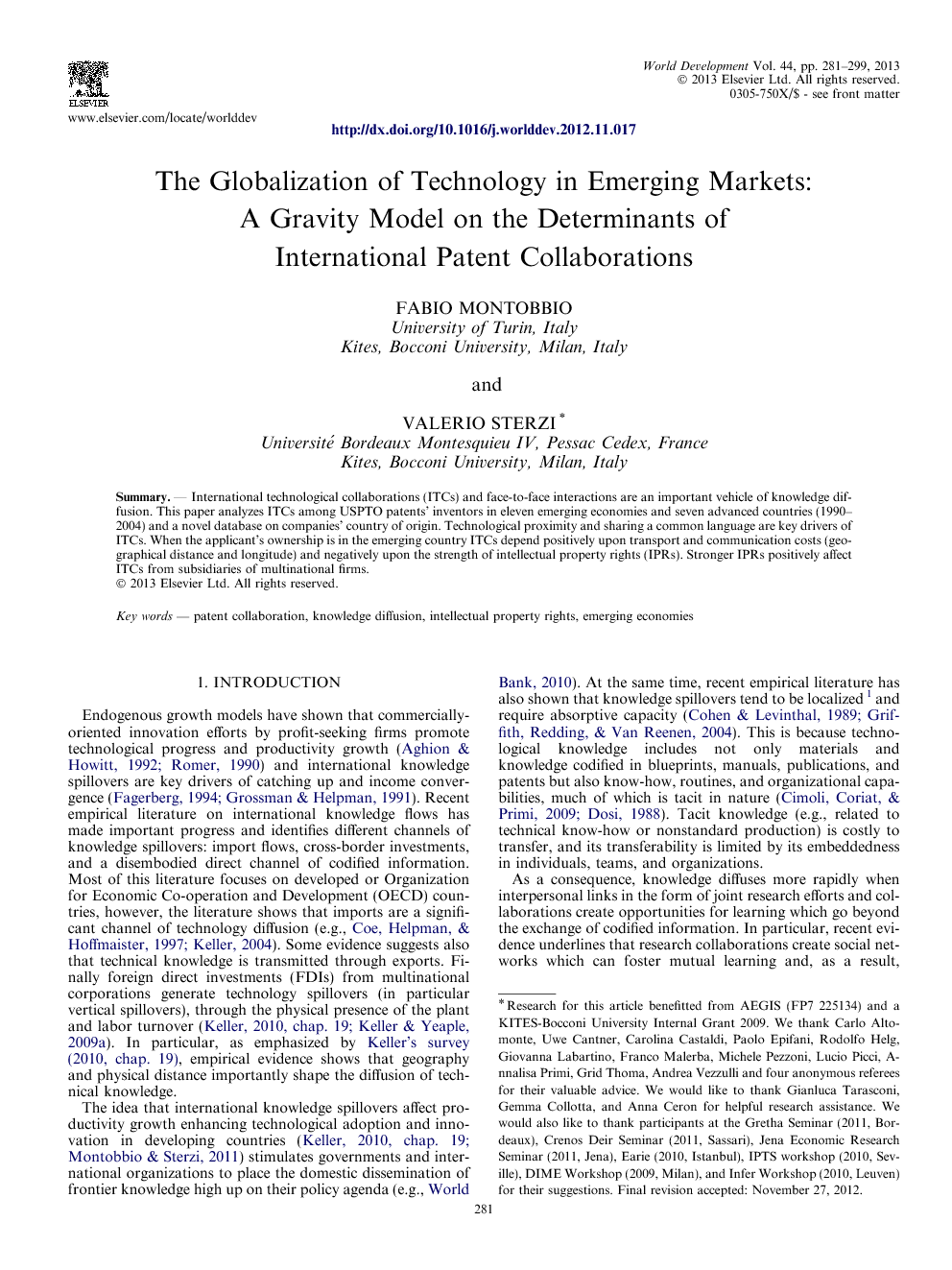 International technological collaborations (ITCs) and face-to-face interactions are an important vehicle of knowledge diffusion. This paper analyzes ITCs among USPTO patents’ inventors in eleven emerging economies and seven advanced countries (1990–2004) and a novel database on companies’ country of origin. Technological proximity and sharing a common language are key drivers of ITCs. When the applicant’s ownership is in the emerging country ITCs depend positively upon transport and communication costs (geographical distance and longitude) and negatively upon the strength of intellectual property rights (IPRs). Stronger IPRs positively affect ITCs from subsidiaries of multinational firms.

There is a growing body of literature that underlines that face-to-face contacts and personal interactions are a crucial vehicle of knowledge transfer and spillovers. In emerging countries, access to foreign technologies, in particular, via collaborations with foreign counterparts, both in the domestic country and abroad is a hot political issue. As scientific research increasingly involves international teams and mobility of researchers is on the rise, it is possible to ask whether collaborative links with foreign laboratories rely more on relational and capability proximity than on geographical distance. Also, multinationals are increasingly delocalizing R&D activities in host countries, spurring a debate on what are the conditions under which the local community of researchers and firms can learn by tapping into foreign collaborative networks. Taking these issues as a point of departure, this paper analyzes international technological collaborations among inventors in emerging and advanced countries using USPTO patent applications and asks to what extent they are affected by a decrease in communication and transport costs (that are a function of geographical distance). In addition, it studies the effects of a set of economic and institutional variables like technological proximity, sharing a common language, or a colonial link, and, finally, the recent reinforcement of IPRs brought about by the TRIPs agreement. This paper uses a novel database that considers not only the residence of inventors and assignees but also the companies’ country of origin (in terms of ownership). In addition, the specific composition of the international team of inventors and the relative weight of the different countries in the team are taken into account. An important point of the paper is that results depend upon the type of collaboration considered and it makes a substantial difference whether the collaboration stems from a multinational company from an advanced country or a company from an emerging country. Overall, geographical distance seems to have a modest effect on international collaborations when controlling for trade relationships, technological, and cultural distances. However, differences arise when we consider the origin and the nature of such collaborations. In particular, we observe that distance affects international collaborations only when they originate in laboratories of companies from the emerging countries. On the contrary, geographical distance in itself is not important for those collaborations originating in MNC subsidiaries or via the international mobility of inventors from an emerging to an advanced country. If simple geographical distance has no strong (and negative) impact on international collaborations, time zone differences, to some extent, do. We also find that technological proximity is an important factor in explaining international technological collaborations. Sharing a common language is also always significant in the main models. This effect is mainly driven by the collaborations generated by the international mobility of highly-skilled workers from the emerging countries or from companies from the emerging countries. Sharing a common language has no significant impact for collaborations within MNC subsidiaries. Our paper contributes also to the policy debate on the effects of IPR reinforcement and our evidence suggests that there may be some positive effects on knowledge flows generated by the reinforcement of IPRs for those economies which started at the beginning of the 1990s with a low level of IPR protection. However, these results have to be taken with extreme care because the impact of the IPR regime is extremely complex and can vary from sector to sector and country to country. Importantly, we also show that the impact of IPR reinforcement varies according to the type of collaboration considered and country of origin (emerging vs. advanced) of the companies involved. For collaborations deriving from laboratories of multinational subsidiaries we have a positive effect of IPR reinforcement. On the contrary, for collaborations that involve only a company from the emerging market the effect of the reinforcement of IPRs is negative. Finally, our additional results show that a positive result may be confined to pairs of countries that are close trade partners and to those countries with a lower level of per capita GDP.