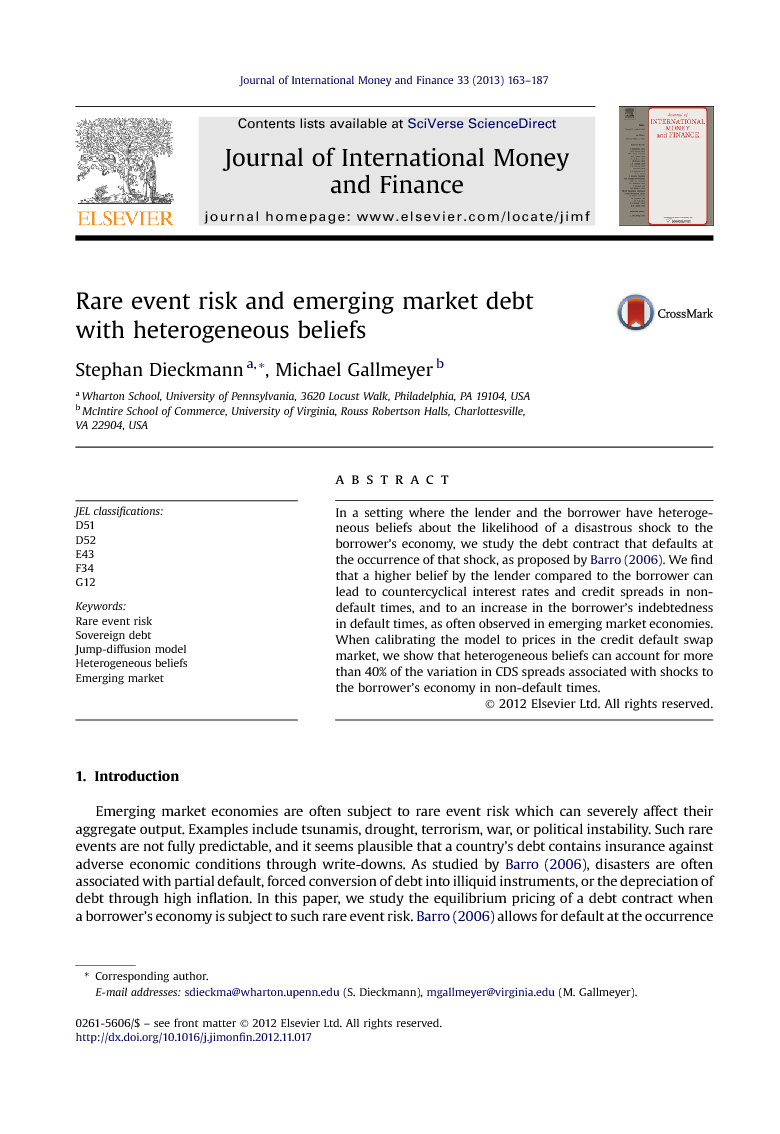 In a setting where the lender and the borrower have heterogeneous beliefs about the likelihood of a disastrous shock to the borrower's economy, we study the debt contract that defaults at the occurrence of that shock, as proposed by Barro (2006). We find that a higher belief by the lender compared to the borrower can lead to countercyclical interest rates and credit spreads in non-default times, and to an increase in the borrower's indebtedness in default times, as often observed in emerging market economies. When calibrating the model to prices in the credit default swap market, we show that heterogeneous beliefs can account for more than 40% of the variation in CDS spreads associated with shocks to the borrower's economy in non-default times.

We revisit the equilibrium debt contract of a levered economy as in Barro (2006). The equilibrium is studied in the context of two market imperfections. First, the borrower retains ownership of the equity share and has obtained leverage by issuing a debt contract to a lender. Second, the lender and the borrower have heterogeneous beliefs about the extent of rare event risk. Our analysis highlights the importance of jointly modeling the interest rate and recovery rate in that they are both closely linked in equilibrium. A higher belief about the likelihood of a rare event and subsequent default by the lender compared to the borrower can generate countercyclical variation of interest rates and credit spreads even in normal economic times. In addition, such a scenario predicts that the borrower's level of indebtedness rises at default, often observed in emerging market economies. Our heterogeneous beliefs framework provides an environment for studying further peso problems in rare events and defaultable debt pricing, possibly also in the context of advanced economies as emphasized by the recent European debt crisis. We leave such analysis for future work.