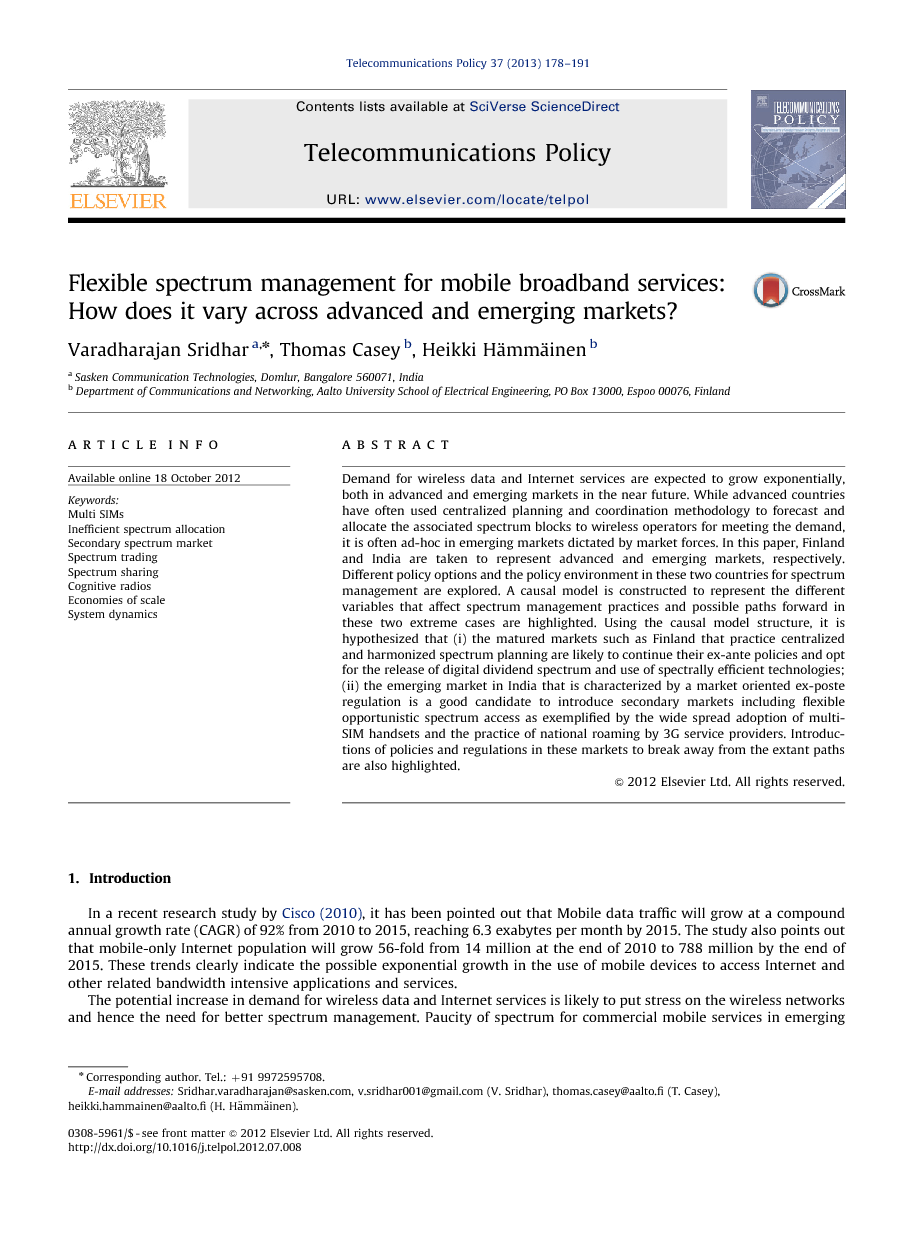 Demand for wireless data and Internet services are expected to grow exponentially, both in advanced and emerging markets in the near future. While advanced countries have often used centralized planning and coordination methodology to forecast and allocate the associated spectrum blocks to wireless operators for meeting the demand, it is often ad-hoc in emerging markets dictated by market forces. In this paper, Finland and India are taken to represent advanced and emerging markets, respectively. Different policy options and the policy environment in these two countries for spectrum management are explored. A causal model is constructed to represent the different variables that affect spectrum management practices and possible paths forward in these two extreme cases are highlighted. Using the causal model structure, it is hypothesized that (i) the matured markets such as Finland that practice centralized and harmonized spectrum planning are likely to continue their ex-ante policies and opt for the release of digital dividend spectrum and use of spectrally efficient technologies; (ii) the emerging market in India that is characterized by a market oriented ex-poste regulation is a good candidate to introduce secondary markets including flexible opportunistic spectrum access as exemplified by the wide spread adoption of multi-SIM handsets and the practice of national roaming by 3G service providers. Introductions of policies and regulations in these markets to break away from the extant paths are also highlighted.

Taking in to account the observations made in the earlier sections and the nature of balancing and reinforcing loops in the causal diagrams, the authors can hypothesize that the harmonization policy pursued in the advanced markets such as Finland has led to a situation where demand for wireless broadband in the future will be met mainly by increasing adoption of spectrally efficient technologies (i.e., refarming of UMTS and LTE technologies on legacy bands) and by releasing more digital dividend spectrum for the exclusive use of the MNOs. The policies pursued in emerging countries such as India and the corresponding market structure that has emerged, in turn, could lead to higher activity in the secondary markets both in terms of co-operative trading and sharing between the MNOs and MVNOs/ISPs/venue owners and opportunistic spectrum access by the end-users, and thus to a more rapid diffusion of cognitive radio technologies. As indicated in Fig. 3, cost of devices play a very important role in the adoption of cognitive radio technologies. The market size is large enough to provide the required scale economies to drive down the prices and hence increase adoption. Since the established path dependencies are strong and the underlying structures that have caused them are typically quite slow to change, it is more likely that both markets are expected to continue on their current paths. However, it must also be pointed out that regulators and policy makers are continuously exploring ways to break away from the legacy and initiate policy directives as per the continuously evolving technology and market conditions. The authors discuss in this section our observations on the validity of their model and hypotheses.