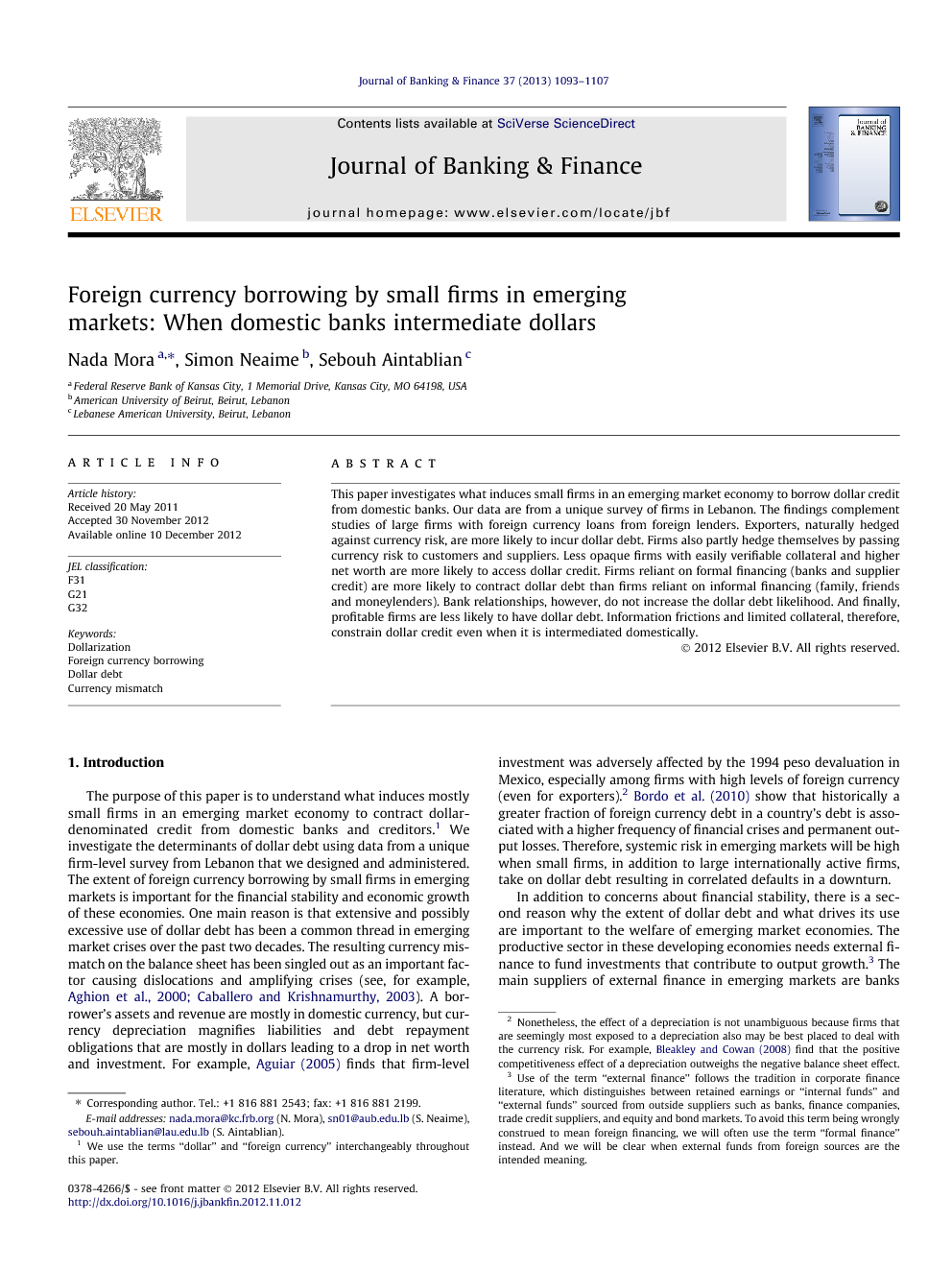 This paper investigates what induces small firms in an emerging market economy to borrow dollar credit from domestic banks. Our data are from a unique survey of firms in Lebanon. The findings complement studies of large firms with foreign currency loans from foreign lenders. Exporters, naturally hedged against currency risk, are more likely to incur dollar debt. Firms also partly hedge themselves by passing currency risk to customers and suppliers. Less opaque firms with easily verifiable collateral and higher net worth are more likely to access dollar credit. Firms reliant on formal financing (banks and supplier credit) are more likely to contract dollar debt than firms reliant on informal financing (family, friends and moneylenders). Bank relationships, however, do not increase the dollar debt likelihood. And finally, profitable firms are less likely to have dollar debt. Information frictions and limited collateral, therefore, constrain dollar credit even when it is intermediated domestically.

We set out in this research to understand what induces many firms (even many small non-exporters) in an economy dominated by domestic banks to appreciably engage in foreign currency borrowing. The findings can be understood within the dual liquidity framework developed by Caballero and Krishnamurthy, 2002 and Caballero and Krishnamurthy, 2003, in which dollar liquidity is intermediated domestically between agents with surplus dollar liquidity (domestic banks channeling regional and expatriate depositor funds) and entrepreneurs borrowing this limited liquidity against the value of their collateral. Underdeveloped domestic financial markets restrict the amount of future investment returns that an entrepreneur can use to secure a dollar loan (supporting the possibility that profitable firms are constrained in their ability to pledge profits). If we take the Caballero and Krishnamurthy claim one step further, borrowers are, most likely, excessively dollarized. In the event of a crisis – characterized by a shortage of international liquidity –domestic asset prices (and hence, collateral values) will be depressed, pushing down the demand for credit. Crises are not impossible even for Lebanon, which has long puzzled observers by its economic stability despite a high debt-to-GDP ratio that reached 180% in 2006 (e.g. Schimmelpfennig and Gardner, 2008; The Economist, April 25, 2009 “Lebanon: Bucking the trend”). This enviable position is supported by self-sustaining lending by the banking system to the government, as articulated by Nassib Ghobril of Byblos Bank: “in this crisis, governments in the US, Europe and elsewhere have been stepping in to rescue their banking sectors, whereas in Lebanon the sector is so large it has been supporting the state for years.” (The New York Times, October 28, 2008 “Armored against turmoil, Lebanon lures investors”). While domestic banks have no incentive to mount a speculative attack because they are fully exposed to the state (unlike, for example, the case of dispersed foreign lenders in Argentina in 2001), this stable funding position relies on the continued cooperation of depositors. Should a run occur, similar liquidity shortages will result. What can policymakers do to mitigate the likelihood and effects of crises? First, central banks can accumulate foreign exchange reserves to increase international liquidity, which the Banque du Liban has done in recent years (e.g. Bordo et al., 2010, find that high international reserves help decrease the likelihood of currency crises for countries with high foreign currency debt shares). Second, policymakers and market participants can develop forward foreign exchange markets to allow domestic agents to financially hedge exchange rate risk (Luca and Petrova, 2008). Such a development also would facilitate a move to a more flexible exchange rate policy. Exchange rate flexibility would nudge agents to internalize the currency risk that they incur, lowering credit dollarization (Martinez and Werner, 2002). Third, other domestic financial markets can be deepened, including the equity market, which is associated with positive welfare gains. For example, when successful companies raise additional capital such as the Patchi family-owned global chocolate chain, they choose to list in London and Dubai rather than on the Beirut Stock Exchange (Financial Times, August 10, 2009, “Lebanese chocolate maker set for listing”). Deepening equity markets – in addition to other mechanisms such as better verification of profits through credible contracts and courts – would also serve to expand collateral and the extent to which future profits can be pledged to investors. This would help reduce misallocations of the limited dollar credit. Finally, if the government were to reduce its debt burden, economy-wide real interest rates would decrease, allowing more projects to pass the financing threshold.