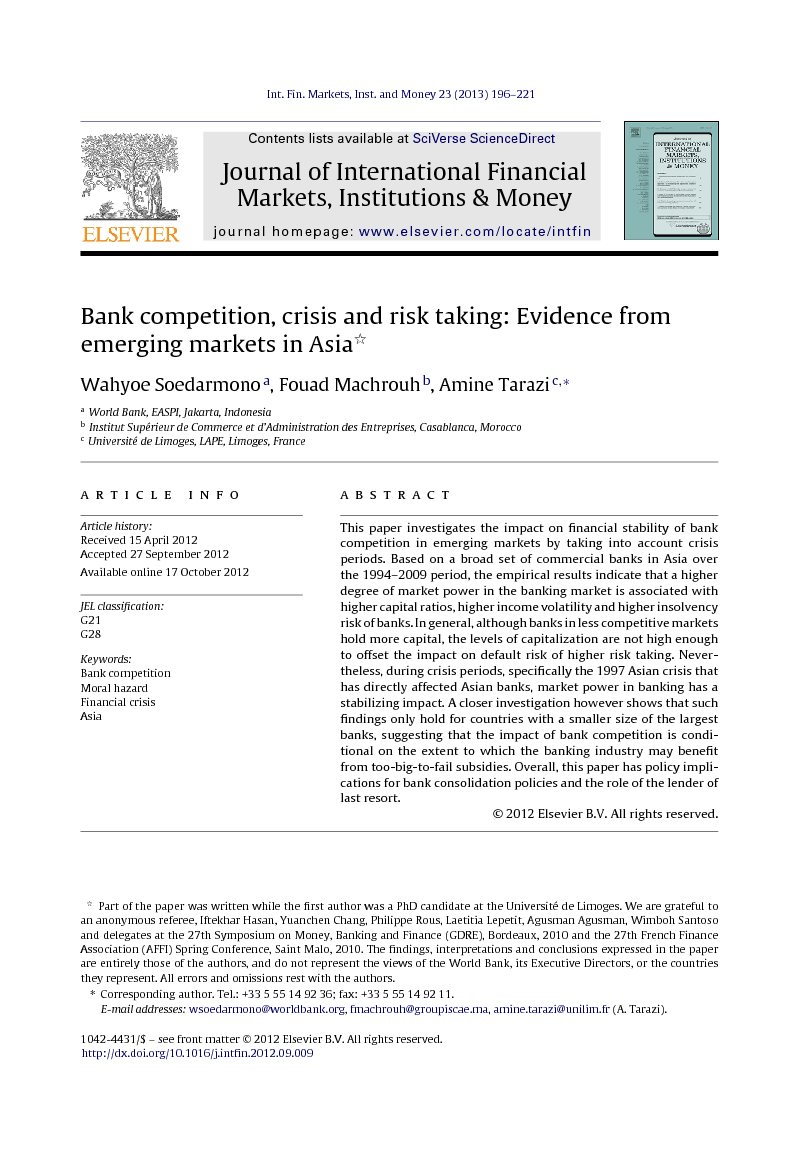 This paper investigates the impact on financial stability of bank competition in emerging markets by taking into account crisis periods. Based on a broad set of commercial banks in Asia over the 1994–2009 period, the empirical results indicate that a higher degree of market power in the banking market is associated with higher capital ratios, higher income volatility and higher insolvency risk of banks. In general, although banks in less competitive markets hold more capital, the levels of capitalization are not high enough to offset the impact on default risk of higher risk taking. Nevertheless, during crisis periods, specifically the 1997 Asian crisis that has directly affected Asian banks, market power in banking has a stabilizing impact. A closer investigation however shows that such findings only hold for countries with a smaller size of the largest banks, suggesting that the impact of bank competition is conditional on the extent to which the banking industry may benefit from too-big-to-fail subsidies. Overall, this paper has policy implications for bank consolidation policies and the role of the lender of last resort.

In spite of a strong consolidation in Asian banking, there is no evidence that such a process enhances bank stability. This paper attempts to assess such an issue by investigating the impact of market power in banking on bank capital ratios, risk taking, and insolvency risk. Based on a sample of 636 commercial banks in 11 Asian countries over the 1994–2009 period, our empirical results highlight that a higher degree of market power in banking is associated with an increase in bank risk taking and bank insolvency risk although capital ratios are also higher. However, these findings do not hold during the 1997 Asian crisis period (1997–1999), where higher market power decreases bank risk taking and insolvency risk. These results are robust to several sensitivity analyses. Specifically, our findings show that in general, the increase in capital ratios in less competitive environments is not high enough to offset the effect of higher risk taking on bank insolvency risk, highlighting possible moral hazard problems in Asian banks. During a financial crisis, our results for the 1997–1999 period show that lower competition has a stabilizing effect which is opposite to what we find in the overall period of study and in the 2007–2009 period. Under such circumstances, higher market power in the banking industry might contribute to reduce moral hazard, at least in the crisis period that has directly affected Asian banking. A closer investigation is also conducted to examine whether or not such results are country specific. Indeed some Asian countries suffered from relatively more severe bank moral hazard problems in the form of “gambling for resurrection” or “looting”, particularly during the 1997 Asian crisis period. As such, the length of the crisis and the degree of economic recovery differed from one country to another. By incorporating the role of too-big-to-fail subsidies as a country-specific factor, our results are reversed for countries with larger banks which could force central banks to engage in higher amounts of too-big-to-fail subsidies. These findings have various policy implications with regards to bank consolidation policies and the role of the lender of last resort. In the Asian context, market power in the banking industry, which is expected to enhance self-discipline induced by lower competition, does generally neither moderate bank risk taking nor provide enough incentives for banks to hold sufficiently more capital to prevent higher insolvency risk, except when the behavior of the lender of resort in providing too-big-to-fail subsidies is more stringent to limit bank moral hazard incentives. Specifically, our results indicate that during financial crises that directly affect Asian banks, the stabilizing effect of market power is only effective for countries with smaller large banks i.e. when the role of lender of resort is more limited. On the whole in achieving bank stability public authorities need to consider the degree of competitiveness of the banking system but also the size of the largest so-called systemic banks.