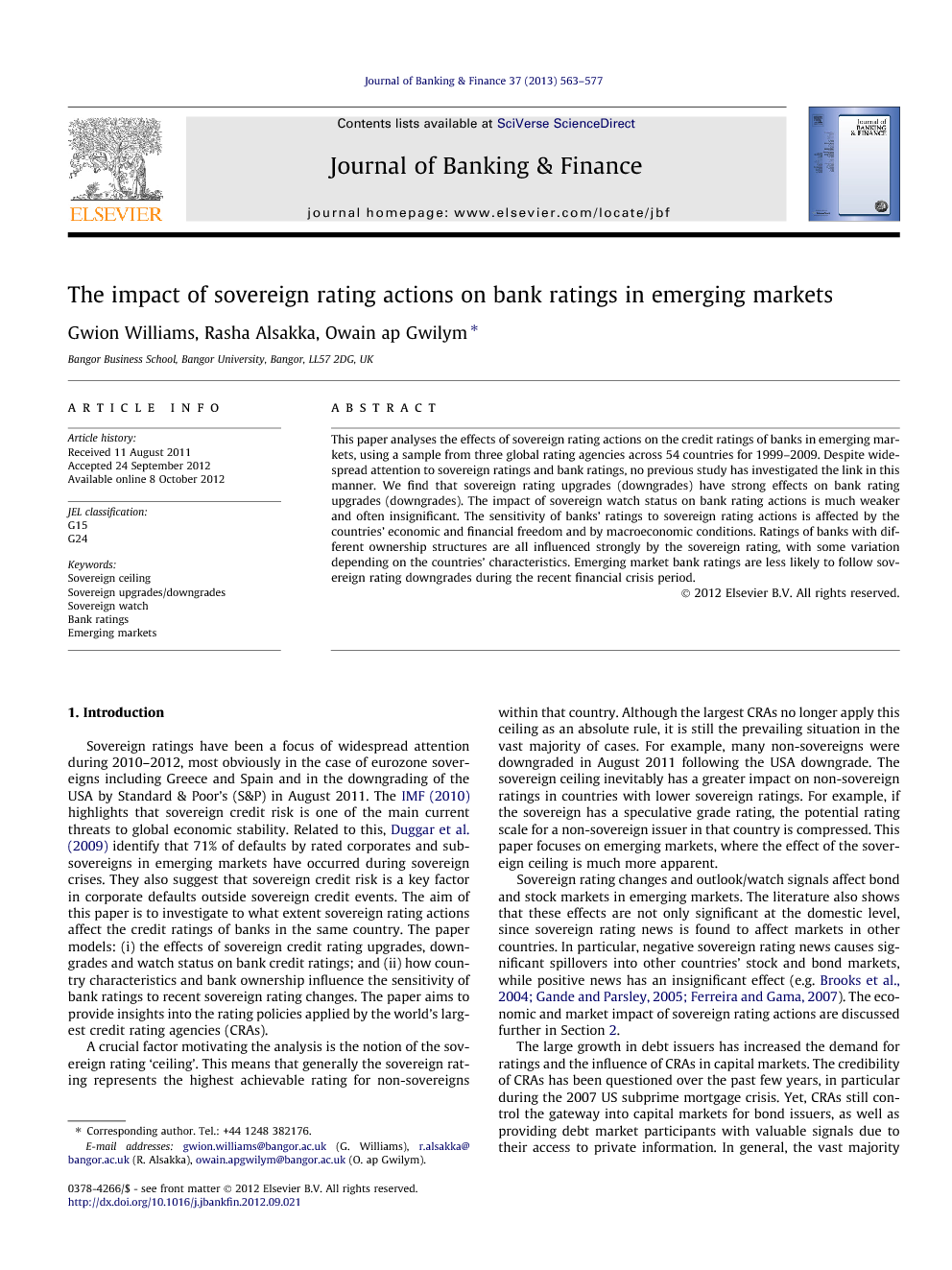 Sovereign ratings have been a focus of widespread attention during 2010–2012, most obviously in the case of eurozone sovereigns including Greece and Spain and in the downgrading of the USA by Standard & Poor’s (S&P) in August 2011. The IMF (2010) highlights that sovereign credit risk is one of the main current threats to global economic stability. Related to this, Duggar et al. (2009) identify that 71% of defaults by rated corporates and sub-sovereigns in emerging markets have occurred during sovereign crises. They also suggest that sovereign credit risk is a key factor in corporate defaults outside sovereign credit events. The aim of this paper is to investigate to what extent sovereign rating actions affect the credit ratings of banks in the same country. The paper models: (i) the effects of sovereign credit rating upgrades, downgrades and watch status on bank credit ratings; and (ii) how country characteristics and bank ownership influence the sensitivity of bank ratings to recent sovereign rating changes. The paper aims to provide insights into the rating policies applied by the world’s largest credit rating agencies (CRAs). A crucial factor motivating the analysis is the notion of the sovereign rating ‘ceiling’. This means that generally the sovereign rating represents the highest achievable rating for non-sovereigns within that country. Although the largest CRAs no longer apply this ceiling as an absolute rule, it is still the prevailing situation in the vast majority of cases. For example, many non-sovereigns were downgraded in August 2011 following the USA downgrade. The sovereign ceiling inevitably has a greater impact on non-sovereign ratings in countries with lower sovereign ratings. For example, if the sovereign has a speculative grade rating, the potential rating scale for a non-sovereign issuer in that country is compressed. This paper focuses on emerging markets, where the effect of the sovereign ceiling is much more apparent. Sovereign rating changes and outlook/watch signals affect bond and stock markets in emerging markets. The literature also shows that these effects are not only significant at the domestic level, since sovereign rating news is found to affect markets in other countries. In particular, negative sovereign rating news causes significant spillovers into other countries’ stock and bond markets, while positive news has an insignificant effect (e.g. Brooks et al., 2004, Gande and Parsley, 2005 and Ferreira and Gama, 2007). The economic and market impact of sovereign rating actions are discussed further in Section 2. The large growth in debt issuers has increased the demand for ratings and the influence of CRAs in capital markets. The credibility of CRAs has been questioned over the past few years, in particular during the 2007 US subprime mortgage crisis. Yet, CRAs still control the gateway into capital markets for bond issuers, as well as providing debt market participants with valuable signals due to their access to private information. In general, the vast majority of studies on credit ratings have used data from a single agency (usually Moody’s or S&P). More recently, a few studies have highlighted important inter-agency differences (e.g. Hill et al., 2010). This paper contributes to the literature by examining the effects of sovereign rating actions on bank ratings. We consider the economic significance of detected relationships by calculating the effects of changes in the independent variables (sovereign rating change and sovereign watch status) on the probability of bank rating upgrades and downgrades of one and two or more notches, and the probability of no rating change, i.e., the marginal effects (see Livingston et al., 2008). We utilise a large dataset of emerging market bank ratings from the three global CRAs, namely Moody’s, S&P and Fitch. Several robustness checks are performed using sub-samples by agency, bank ownership and time periods. We also investigate whether the characteristics of the countries, in terms of economic/financial freedom and macroeconomic conditions, influence the sensitivity of bank ratings to sovereign rating changes, and whether this impact varies across different bank ownership status. The main results are as follows. Emerging market banks have very high probabilities of being upgraded (downgraded) soon after an upgrade (downgrade) to their corresponding sovereign rating. These effects are fairly consistent for all three CRAs, although some results imply that Moody’s is the least likely agency to migrate bank ratings simultaneously with the sovereign rating. We find that the sensitivity of bank ratings to sovereign rating actions does vary depending on the country’s overall economic and financial freedom and macroeconomic factors. The results are not driven by bank ownership, because state-owned, foreign-owned, and local privately-owned bank ratings are all affected very strongly. However, local privately-owned banks’ ratings are the most sensitive to sovereign upgrades, and foreign-owned banks’ ratings are the most sensitive to sovereign downgrades. This can be explained by varying levels of influence of country characteristics on bank ratings’ sensitivity to sovereign rating actions across different ownership structures of banks. The rest of the paper is organised as follows. Section 2 reviews the relevant literature, Sections 3 and 4 discuss the data and methodology, Section 5 presents the empirical results and Section 6 concludes the paper.