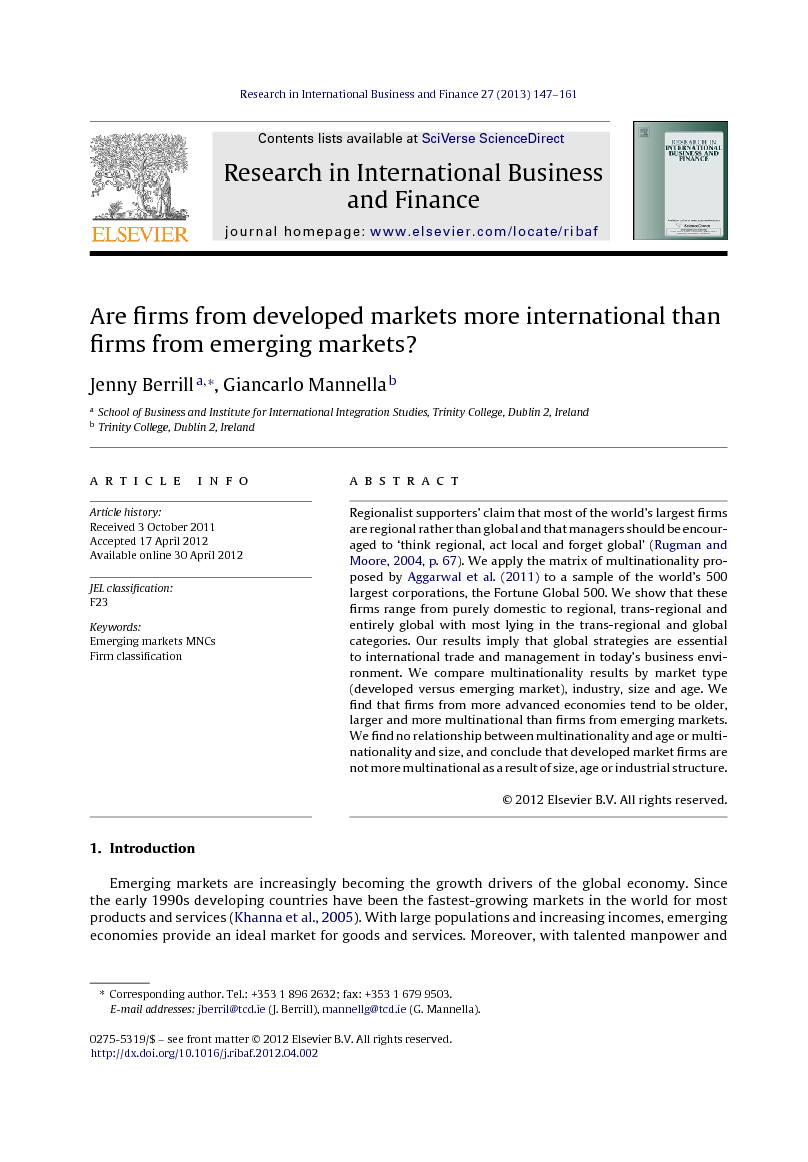 Regionalist supporters’ claim that most of the world's largest firms are regional rather than global and that managers should be encouraged to ‘think regional, act local and forget global’ (Rugman and Moore, 2004, p. 67). We apply the matrix of multinationality proposed by Aggarwal et al. (2011) to a sample of the world's 500 largest corporations, the Fortune Global 500. We show that these firms range from purely domestic to regional, trans-regional and entirely global with most lying in the trans-regional and global categories. Our results imply that global strategies are essential to international trade and management in today's business environment. We compare multinationality results by market type (developed versus emerging market), industry, size and age. We find that firms from more advanced economies tend to be older, larger and more multinational than firms from emerging markets. We find no relationship between multinationality and age or multinationality and size, and conclude that developed market firms are not more multinational as a result of size, age or industrial structure.

Emerging markets are increasingly becoming the growth drivers of the global economy. Since the early 1990s developing countries have been the fastest-growing markets in the world for most products and services (Khanna et al., 2005). With large populations and increasing incomes, emerging economies provide an ideal market for goods and services. Moreover, with talented manpower and low costs, emerging economies are supplying more goods and services to the world than in the past (Pillania, 2009). According to Bekaert and Harvey (2002), a country is considered emerging if its’ GDP per capita falls below a certain level. The main presumption is that such countries will ultimately arise or emerge from their less developed status to join the group of developed countries. Bruner et al. (2002) note that nearly 150 countries fall below the standard definition of development; however, most international investors focus their attention on approximately 30 of these countries. O’Neill et al. (2005) predict that four of the largest emerging markets (Brazil, Russia, India and China, BRIC) will overtake the G7 countries by 2040. The IMF World Economic Outlook (2011) predicts that growth rates in emerging markets will surpass growth estimates from developed markets for 2011 and 2012 (6.5% versus 2.5%). Regardless of how widely or narrowly emerging markets are defined, they tend to offer distinctive investment opportunities. Emerging economies have become an increasingly important part of the world economy, accounting for 75% of the world's land mass, over 80% of its population, but only 20% of global GNP ( IP Frontline, 2011). There is an increased interest in research related to emerging markets and multinational corporations (MNCs) (see for example: London and Hart, 2004, Meyer, 2004, Ramamurti, 2004, Khanna and Palepu, 2004, Khanna et al., 2005, Accenture, 2008, Pillania, 2009 and Aggarwal et al., 2010). According to the United Nations Conference on Trade and Development (UNCTAD, 2005), there are more than 50,000 companies worldwide that qualify as MNCs. The world's largest MNCs represent nearly 25% of the world's GDP and virtually half of total world trade. The Forbes Global 2000 list of the world's largest firms based on assets, sales, profits and market values shows that in 2011, these firms collectively owned US$138 trillion in assets, earned US$32 trillion in revenues, gained US$2.4 trillion in profits, presented a total market value of US$38 trillion and employed roughly 80 million people worldwide (De Carlo, 2011). Using GDP data from the World Bank and firm-level sales data from the Fortune Global 500 (FG500) list, 1 Anderson and Cavanagh (2000) show that of the world's 100 largest economic entities, 51 are MNCs and 49 are countries, indicating the strong influence, not only from an economic perspective, these organisations have on our society. The objective of this study is to contribute further to the internationalisation literature and in particular to the globalisation versus regionalisation debate by uncovering some characteristics of both developed and emerging market firms. We categorise the FG500 firms in 2010 using the classification system proposed by Aggarwal et al. (2011). We investigate if firms from developed markets are more international than firms from emerging markets. In doing so, we examine firms’ degree of multinationality by applying the matrix of multinationality proposed by Aggarwal et al. (2011) to the FG500 largest corporations worldwide in 2010. Furthermore, we analyse and compare the percentage of foreign versus domestic sales for all firms and compare the multinationality of firms with different ages, sizes and from different industries. Our paper makes several contributions to the literature. First, we provide a more in-depth investigation into the multinationality of firms than exists in the literature to date using two measures of multinationality (the matrix of multinationality proposed by Aggarwal et al. (2011) and percentage foreign to total sales) and making comparisons by market type (developed versus emerging), industry, age and size. Second, we contribute to the globalisation versus regionalisation debate in international business (IB). Third, our results have important implications for MNC sample creation. In the past being large was synonymous with being multinational. However, the introduction of new technologies such as the Internet means that achieving economies of scale is no longer a crucial requirement to becoming multinational. The expanding literature on born global firms is a testament to this. Aggarwal et al. (2011) examine 393 papers that have used empirical samples of MNCs published in the fourteen most cited international business and management journals2 between 1987 and 2007. They find that the most popular datasource used for empirical analysis is the FG500 list. With this in mind, we investigate how multinational FG500 firms are. The remainder of this paper is structured as follows. Section 2 reviews the literature on the characteristics of emerging market multinationals and the regional versus global debate. Section 3 describes the data and methodology. Section 4 discusses our empirical results from our analysis of FG500 companies. Finally, Section 5 summarises our main findings and draws together our conclusions.

We analyse the FG500 list of the largest firms in the world in 2010. We apply the system proposed by Aggarwal et al. (2011) to classify the multinationality of these corporations. Diversely from the Regionalist supporters’ claim that most FG500 firms are regional rather than global, we find that the sample includes a broad variety of firms ranging from purely domestic corporations to entirely global MNCs, with most being classified as trans-regional. We also find that there are relatively few regional firms. There are no firms with sales classified as R2, and very few firms with regional sales (R1 and R3). Home region penetration from sales perspective thus appears to be very limited. We show that firms from advanced economies tend to be more multinational than firms from emerging economies. Firms from developed economies also tend to be older and larger than firms from emerging markets. However, we find no relationship between multinationality and age or multinationality and size. We therefore conclude that DM firms are not more multinational as a result of size, age or industrial structure. We further suggest that regional geographical categorisations are inappropriate given the existing trends towards a more globalised economy. This is particularly true for emerging markets that are, by definition, on a transformation track. In the past few years the academic literature has analysed EMNCs, detailing how they differ from developed market MNCs (Khanna et al., 2005, Goldstein, 2007, Cuervo-Cazurra and Genc, 2008, Pillania, 2009 and Berrill and Kearney, 2010). Future research could investigate if the differences between developed and emerging market firms found in this study continue to exist over time, as well as the potential changes and trends over time.