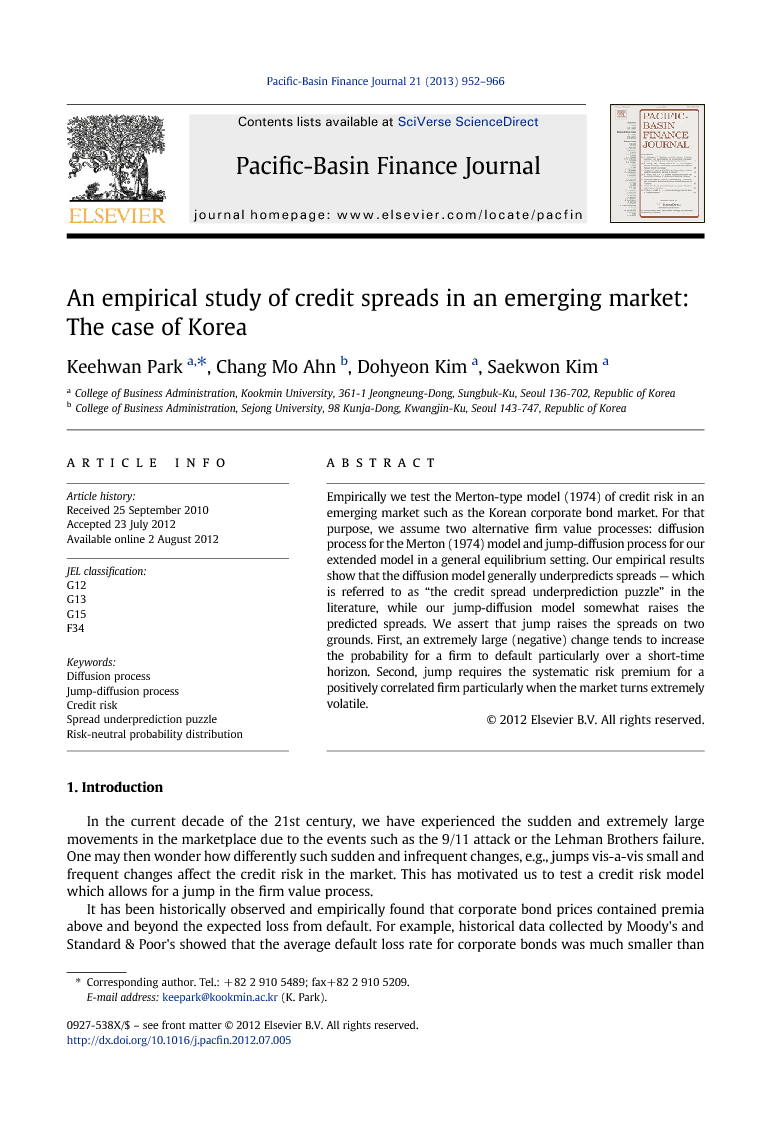 Empirically we test the Merton-type model (1974) of credit risk in an emerging market such as the Korean corporate bond market. For that purpose, we assume two alternative firm value processes: diffusion process for the Merton (1974) model and jump-diffusion process for our extended model in a general equilibrium setting. Our empirical results show that the diffusion model generally underpredicts spreads — which is referred to as “the credit spread underprediction puzzle” in the literature, while our jump-diffusion model somewhat raises the predicted spreads. We assert that jump raises the spreads on two grounds. First, an extremely large (negative) change tends to increase the probability for a firm to default particularly over a short-time horizon. Second, jump requires the systematic risk premium for a positively correlated firm particularly when the market turns extremely volatile.

In the current decade of the 21st century, we have experienced the sudden and extremely large movements in the marketplace due to the events such as the 9/11 attack or the Lehman Brothers failure. One may then wonder how differently such sudden and infrequent changes, e.g., jumps vis-a-vis small and frequent changes affect the credit risk in the market. This has motivated us to test a credit risk model which allows for a jump in the firm value process. It has been historically observed and empirically found that corporate bond prices contained premia above and beyond the expected loss from default. For example, historical data collected by Moody's and Standard & Poor's showed that the average default loss rate for corporate bonds was much smaller than the observed spread. Empirically, however, Jones et al. (1984) tested the Merton model (1974) of credit risk which assumed a diffusion process and found that it predicted little of the observed credit spreads in the U.S. market, even though it had somewhat an explanatory power for non-investment grade bonds. Similarly, Eom et al. (2004) found that the Merton-type model (1974) underpredicted spreads on average, and the underprediction was extreme on the short-maturity bonds. This has been referred to as “the spread underprediction puzzle” in the literature. Afterward, there have been several extensions of the Merton model to explain for the underprediction problem. Among others, the incorporated considerations were strategic defaults by equity holders (Anderson et al., 2002), new debt issuances (Collin-Dufresne and Goldstein (2001)), bankruptcy costs (Longstaff and Schwartz, 1995), endogenous defaults (Leland and Toft, 1996), and jump risks (Huang and Huang (2003)).1 The purpose of our paper is to empirically test and compare the Merton-type models — allowing for a jump — in an emerging market such as the Korean corporate bond market. For that purpose, we assume two alternative processes for generating the return dynamics for the firm value: diffusion process and jump-diffusion process. We first test the Merton model (1974) for the diffusion process. As the model was originally for a pure discount (i.e., zero-coupon) bond, we modify it in a similar way that it was done by Eom et al. (2004), in order to allow for a coupon-bond, which is more popular in the Korean market. For the jump-diffusion alternative, we reframe the Merton (1974) model in a general equilibrium setting, relying upon the models by Cox et al. (1985), Ahn and Thompson (1988) and Bates (1991). We derive the risk-neutral return dynamics for the firm value process by forcing the stochastic Euler equation into a Martingale representation. Our empirical results show that allowing for a jump in the firm-value process raises the predicted spreads without increasing the total volatility vis-a-vis the pure diffusion model, and thereby helps to explain for the credit underprediction problem. We tend to think that: (1) jump raises the default probability over the short-horizon for an average firm, other things being equal,2 and (2) jump is likely to increase the systematic risk premium for a positively correlated firm, particularly when the market turns extremely volatile. Our samples for testing are the straight coupon-bonds (denominated in the Korean won currency) issued by Korean firms of various credit rating classes during the somewhat tranquil period of 2003 through 2004 and the turbulent period of 2008 through 2009. We choose these two separate periods to see any differences, if any, between the tranquil and turbulent periods. Korean firms actively issued new debts during the first period as the economy had fully recovered from the Asian financial crisis which started in the late 1997. During the second period of 2008 through 2009, the Korean economy had fallen sharply due to the world-wide contagious effect of the U.S. sub-prime mortgage crisis. As a preliminary test, we first examine which of the assumed processes, i.e., a pure diffusion process vis-a-vis a mixed jump-diffusion process, fits better the underlying data, and provides summary statistics on the data. This will be done first by using the daily equity index for the period of 2001 through 2008. Predicting spreads requires a prior estimation of the parameters' values of the return distribution of the firm value processes. In order to estimate these parameters' values of the distribution, we employ the technique used by Vassalou and Xing (2004). They imputed the firm asset value (unobservable) from its equity price (observable) by an iteration method, which is a novelty, based on the relationship between the equity price and the underlying asset value given in the Merton model (1974). We use the probability density function given in Fujihara and Park (1990) for fitting the distribution of the jump-diffusion firm value process. Maximum likelihood technique is employed to estimate the parameters' values of the distribution. The paper proceeds as follows: Section 2 briefly describes our general equilibrium model and derives the risky bond pricing equations for the diffusion process and for the jump-diffusion process. The pricing equations are straight applications of the risk-neutral dynamics for the firm value process, which is derived in Appendix A. Data description and estimation results are contained in Section 3. In Section 4, we discuss some implications of our empirical results for the prior works in the literature. Finally, we offer our concluding remarks in Section 5.