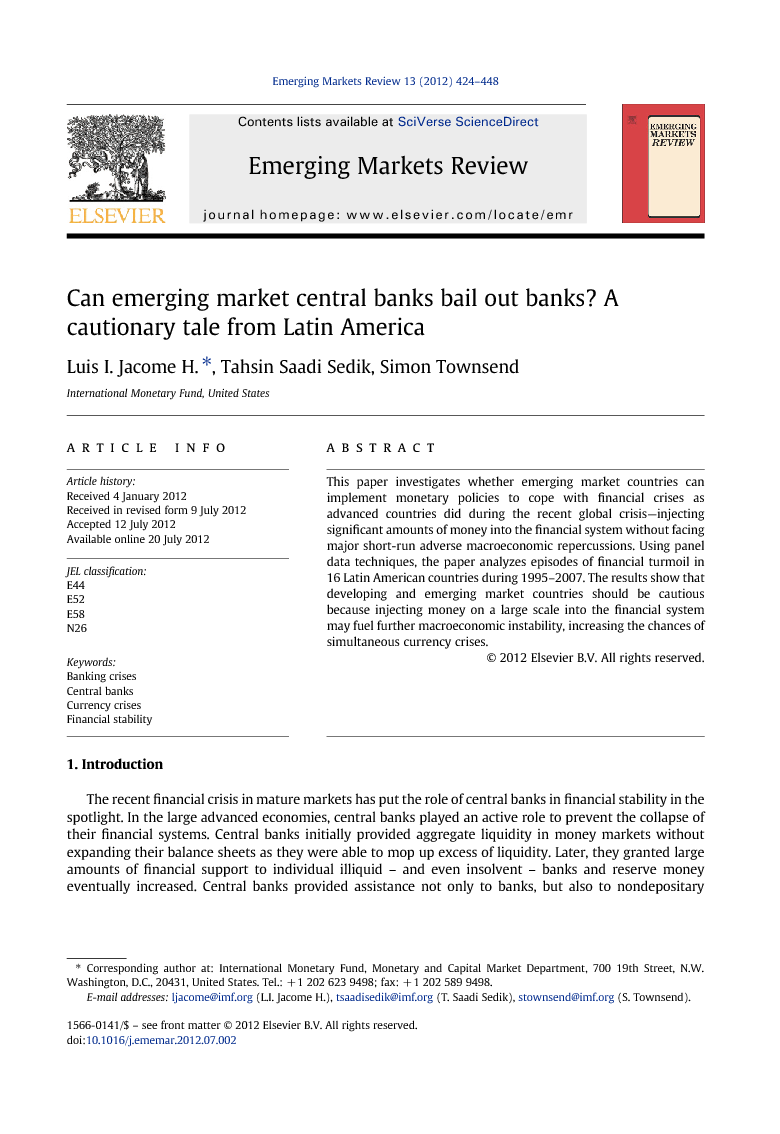 This paper investigates whether emerging market countries can implement monetary policies to cope with financial crises as advanced countries did during the recent global crisis—injecting significant amounts of money into the financial system without facing major short-run adverse macroeconomic repercussions. Using panel data techniques, the paper analyzes episodes of financial turmoil in 16 Latin American countries during 1995–2007. The results show that developing and emerging market countries should be cautious because injecting money on a large scale into the financial system may fuel further macroeconomic instability, increasing the chances of simultaneous currency crises.

The recent financial crisis in mature markets has put the role of central banks in financial stability in the spotlight. In the large advanced economies, central banks played an active role to prevent the collapse of their financial systems. Central banks initially provided aggregate liquidity in money markets without expanding their balance sheets as they were able to mop up excess of liquidity. Later, they granted large amounts of financial support to individual illiquid – and even insolvent – banks and reserve money eventually increased. Central banks provided assistance not only to banks, but also to nondepositary institutions, arguing that the former are no longer the only financial intermediaries that pose a systemic risk.1 However, despite extensive monetization, these policies did not fuel inflation pressures. Moreover, the U.S. dollar appreciated—whereas the British pound and the euro depreciated gradually with respect to other currencies without causing macroeconomic instability. Thus, expansionary monetary policy seems to have been a “free lunch” from a macroeconomic perspective.2 Against this background, a new paradigm is emerging that favors an active monetary policy to cope with financial crises. While generous financial assistance to troubled banks has been mostly circumscribed to the advance economies during the global crisis, emerging markets and developing countries may also adopt this policy in the future to cope with financial distress. But, can all emerging markets and developing countries implement similar policies to tackle banking crises with such little cost in terms of macroeconomic stability? This paper argues that emerging markets and developing countries should be cautious when using central bank money to cope with financial crises as large scale monetization may cause further macroeconomic unrest.3 To provide support to this claim, we analyze episodes of financial turmoil in 16 Latin American countries during 1995–2007, review their main macroeconomic repercussions, perform empirical analysis, and distil relevant lessons. The main conclusion is that pouring money into the financial system to confront banking crises tended to fuel macroeconomic and financial instability as it increased the chances of a simultaneous currency crisis. Despite its importance, the role of central banks in episodes of financial turmoil in emerging markets and developing countries has been marginally addressed in the literature.4 While the multiplication of banking crises in recent decades motivated a large number of studies, they are rarely focused on the reaction of monetary policy and its macroeconomic effects on the dynamics of the crises.5 More recently, in the wake of the world financial turmoil, the role of central banks in advanced countries has been extensively examined and, today, there is a lively debate about the scope of central banks' involvement on macroprudential policies.6 Similar studies in developing and emerging market countries continue to receive scant attention, but it is becoming a topic of increasing interest among policy makers. The contribution of our paper to the literature is twofold. First, by stressing the perils of providing central bank money in large-scale to support financial institutions, this paper contributes to the discussion about the appropriate central bank response to financial crises in developing and emerging market countries, and alerts policy makers about the dangers of bailing out banks when the country does not issue a reserve currency. Second, our paper successfully tests the hypothesis that as central banks inject money in response to an escalation of the distress in the banking system, chances of having a currency crisis increase. Thus, the paper belongs to the family of studies about balance of payment crises pioneered by Krugman (1979), emphasizing the link between banking and currency crises (third generation models) from an empirical perspective. Our paper also belongs to the “twin crises” literature popularized by Kaminsky and Reinhart (1999) and more recently by Reinhart and Rogoff (2011) and explicitly tests the link between bailing out banks and the increasing chances of having a currency crisis.7 The empirical nature of our paper also complements the theoretical work initially laid out in Velasco (1987) and, with some variations, later addressed by Chang and Velasco (1999). The rest of the paper is organized as follows: Section 2 discusses briefly how central banks confronted crises episodes in Latin America during the last two decades; Section 3 analyzes the macroeconomic repercussions associated with the provision of large-sale central bank support to tackle financial crises and tests empirically the main argument of our paper for the 1995–2007 period; and Section 4 concludes. 2. The response of central banks and its macroeconomic impact Latin America has a long and painful history of banking crises. Recurrent episodes of financial turbulence became a key source of macroeconomic instability up to the mid-2000s. Specifically, Latin America had 28 systemic banking crises from 1970 to 2007, which is a disproportionate number compared with other regions in the world, except for Africa.8 Systemic banking crises were more frequent in the wake of the debt crises of the early-1980s, during the mid-1990s, and in the late-1990s and the early-2000s, following episodes of terms of trade deterioration and/or of capital outflows. More recently, since 1990, only Chile and Panama have been immune to events of financial instability, with a number of countries affected more than once (Argentina, Bolivia, Dominican Republic, Ecuador, Guatemala, and Paraguay). In the rest of this section, we focus our analysis on episodes of financial turmoil in Latin America from the early 1990s onwards, stressing first key characteristics of these events, and then reviewing the modalities of central bank involvement and their macroeconomic repercussions.9

The role that central banks played in the industrial world in the recent financial crisis will probably set a new standard for policies of LLR. Injecting large amounts of money to support troubled financial institutions averted a financial meltdown and later, in tandem with fiscal stimulus, mitigated recession trends, without fueling inflation pressures. It is likely that other countries worldwide would be led to implement similar policies in a future parallel scenario. Based on the Latin American experience, this paper stresses that emerging and developing countries should be cautious if they want to follow the same strategy to tackle financial crises. As opposed to the United States and most European countries, these countries do not issue a reserve currency. This makes them more vulnerable to currency depreciations and volatility in the event of large scale injections of central bank money to cope with banks' distress. Thus, revisiting the recent history of financial crises in Latin America is warranted. We found that confronting banking crises using exclusively monetary policy was not effective to avert and manage financial crises. Moreover, expanding central banks' balance sheets tended to exacerbate macroeconomic instability and fueled currency crises. Alternatively, the roadmap to cope with financial distress in these countries should put bank restructuring and resolution at the forefront. Countries should design a comprehensive strategy to prevent and manage banking crises in which central banks are part of the policy response. Efforts should focus on imposing corrective actions before liquidity and capital shortages become severe, and on implementing bank resolution measures before the crises unfold. Strengthening financial regulation and supervision to keep the pace of the permanent innovation of financial instruments is also a must. In addition, maintaining strong macroeconomic fundamentals is critical to help reducing the uncertainty that would otherwise invade markets' perceptions and feed financial instability, including attacks on the domestic currency. This is particularly relevant for emerging economies because they are closely integrated to global markets, which makes them more vulnerable to the vagaries of capital flows. Thus, emerging countries should build more resilient economies, in particular, maintaining flexible exchange rates, keeping public finances and debt in check, strengthening international reserves, developing money and capital markets, and reducing financial dollarization.