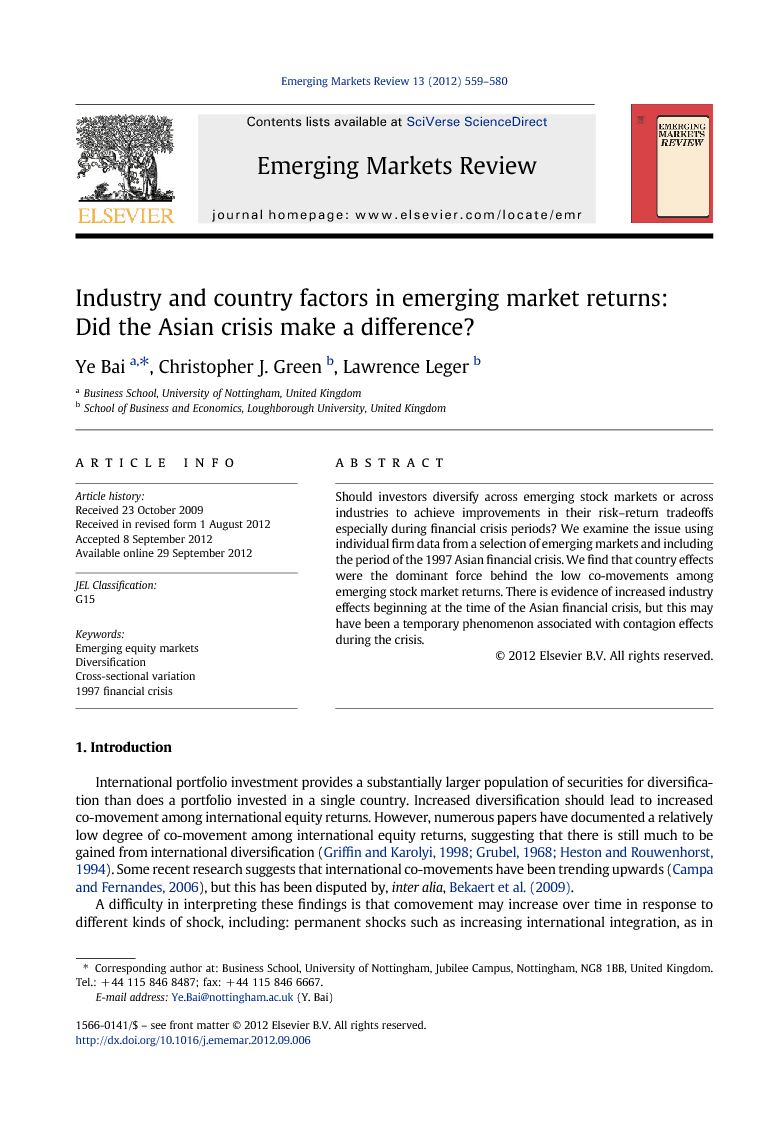 Should investors diversify across emerging stock markets or across industries to achieve improvements in their risk–return tradeoffs especially during financial crisis periods? We examine the issue using individual firm data from a selection of emerging markets and including the period of the 1997 Asian financial crisis. We find that country effects were the dominant force behind the low co-movements among emerging stock market returns. There is evidence of increased industry effects beginning at the time of the Asian financial crisis, but this may have been a temporary phenomenon associated with contagion effects during the crisis.

International portfolio investment provides a substantially larger population of securities for diversification than does a portfolio invested in a single country. Increased diversification should lead to increased co-movement among international equity returns. However, numerous papers have documented a relatively low degree of co-movement among international equity returns, suggesting that there is still much to be gained from international diversification (Griffin and Karolyi, 1998, Grubel, 1968 and Heston and Rouwenhorst, 1994). Some recent research suggests that international co-movements have been trending upwards (Campa and Fernandes, 2006), but this has been disputed by, inter alia, Bekaert et al. (2009). A difficulty in interpreting these findings is that comovement may increase over time in response to different kinds of shock, including: permanent shocks such as increasing international integration, as in the euro-zone (Eiling et al., 2012); temporary global shocks, such as the boom in technology stocks at the turn of the century (Brooks and Del Negro, 2004); or temporary local shocks that spread across international markets by a process of contagion (Fedorova, 2011). If a local shock spreads to other markets, diversification across these markets is evidently less useful in reducing risk than is diversifying more widely. The popular methodological framework for evaluating the sources of international share price co-movements is the orthogonal decomposition of share returns into country, industry and global factors introduced by Heston and Rouwenhorst (1994). This procedure has its critics (Bekaert et al., 2009), but it has the pedagogical advantage that it mimics to some extent the organisation and method of international portfolio managers. A substantial proportion of this decomposition literature has been concerned with the stock markets of the major industrial countries (MICs); there has been much less comparable research on emerging stock markets (ESMs). This is an important limitation, particularly in the context of the 2007–09 banking crisis which affected virtually all the MICs, but had much less direct impact on ESMs. Portfolios which were diversified across MICs often performed less well than those that included ESM securities (Dennis, 2011). However, ESMs in East Asia suffered their own financial crisis much earlier: beginning in 1997. It is therefore particularly interesting to investigate the sources of share price movements in ESMs, especially around the 1997 crisis. In this paper we use the Heston and Rouwenhorst (1994) decomposition to study the sources of share price movements in a sample of ESMs over the period 1984 through 2004, therefore including the 1997 Asian financial crisis. The sample was drawn from ESMs with established stock markets and includes a broad geographical spread of countries, some of which were directly affected by the 1997 crisis, and others that were not.1 Our research extends the existing literature in several ways. First, our dataset includes more ESMs (13) and a longer time period (1984–2004) than most previous researchers.2 This allows us to examine more rigorously changes over time in the relative contributions of industry and country effects, and we do this particularly by means of F-tests in the cross-section regressions. This generates a time series of F-statistics that reveal the significance of the time-varying properties of country and industry effects and lay the foundation for a more detailed decomposition of returns. Second, we investigate the impact of the 1997–98 Asian financial crisis on the country-industry decomposition. The sample covers the “tranquil” period in the run-up to the crisis as well as the aftermath, so that there are sufficient pre- and post-crisis data to enable the identification of any time-variations in the pattern of the cross-sections of returns. We end the sample well before the 2007–09 crisis so as to avoid possible contamination from that source. Third, we use firm-level data rather than the industry index data used in much of this research. 3 The use of industry-level data imposes implicit restrictions on the interpretation of the results as we explain in Section 3. Fourth, we use a rather more aggregated industry classification than in earlier studies. We argue that an unduly fine classification will involve arbitrary allocations of multi-activity firms to specific sectors, a particularly important problem in ESMs where conglomerates are more prevalent than in the MICs. Our analysis concentrates on ESMs and thus gives information about diversification within ESMs rather than between ESMs and MICs. There are three reasons for this. First, it enables us to focus on how a particular group of countries was affected by the 1997 crisis. Second, Grisolia and Navone (2007) argue that it is reasonable to look separately at different regional levels of asset allocation. Our sample excludes Europe and North America but includes firms from less-studied African, Asian and Latin American markets. Third, previous research has not fully dealt with the problems posed by multinationals: a firm may be quoted on a particular market but have their main business in a different country. Firms raising money in New York or London frequently do so for reasons unconnected with the location of their business. The estimated country (and therefore industry) effect may be meaningless if it is not related to a well-defined geographical location of the business of firms in the sample.4 The ESMs in our sample were home to few genuine multinationals, and the estimated country and industry effects are therefore likely to be more firmly based. The rest of the paper is organized as follows: Section 2 provides a brief overview of the literature; Section 3 describes the data and provides some summary statistics; Section 4 sets out the methodology; empirical results are presented and discussed in 5 and 6 contains some concluding remarks.

In this paper, we used monthly data on individual securities to examine the time-varying roles of country and industry effects in the cross-sectional variation of returns in a sample of ESMs, focussing on possible changes in these effects associated with the 1997 Asian financial crisis. The F-tests, return decomposition and MADs all revealed a broadly similar pattern of results from different perspectives. Taking 1986–2004 as a whole, country effects dominate industry effects as we might expect, but there are interesting variations over time. From 1984 to 1986, industry and country factors both have a significant influence on stock returns, although this may be attributable partly to the relatively small sample of companies in the early part of the data. From 1986 to 1997 country factors play the dominant role, as they do in MICs in this period. However, from 1997 to 2004, industry effects become more consistently significant, although they remain less important than the country effects. Overall, the increased significance of industry effects over time is broadly consistent with the majority of results for MICs. A key issue in our research is the 1997 Asian financial crisis. Early studies of ESMs attributed the increasing importance of industry effects to the permanent impact of liberalisation measures in these countries. However, more recent work suggests that the increase in relative importance of the industry effects may be temporary, either due to long swings in the correlations (Bekaert et al., 2009), or to contagion from a financial crisis (Fedorova, 2011). If there was a permanent increase in the industry effect in ESMs, we would observe this towards the end of the sample period, once the impact of the 1997 crisis subsided. However, in the whole sample, industry effects increase only between 1997 and 2002. From early 2003, the industry MAD becomes smaller and less dispersed than before. This is also reflected in the industry dummy F-tests ( Fig. 1), where the number of months with insignificant industry dummies increases near the end of the sample. This pattern appears to lend tentative support to the argument that the post-1997 increase in industry effects was a temporary phenomenon, possibly due to contagion associated with the Asian crisis. If true this would imply that there still exist possibly substantial unexploited diversification gains in ESM equities. Our results also lend support to the earlier findings of increased industry effects in the risk decomposition of stocks (Bai and Green, 2010). However, a key difference is that increased industry effects in the risk decomposition began about a year earlier than for the return decomposition, suggesting perhaps that risk fundamentals may have anticipated to some extent the upcoming crisis. The results suggest that during the crisis, there are smaller country effects but increased industry effects perhaps due to contagion across ESMs. This would suggest that in a crisis, portfolio managers should place more emphasis on diversifying across industries than countries. The results also suggest the need to investigate more fully the composition of returns and risks both in normal periods and in periods of turbulence and possible contagion such as the 2007–09 banking crisis. A final issue in our results is that we are unable to find a clear linkage between traded and non-traded-goods industries and the composition of returns. Cavaglia et al. (2001) find that traded goods sectors do appear to have a greater exposure to industry effects as one might expect but, like us, Brooks and Del Negro (2006) are unable to find such a link. The classification into traded and non-traded goods is necessarily somewhat subjective. However, on balance, it would seem unlikely that our overall industry classification is responsible for these ambiguous results, especially given the conclusions of Marsh and Pfleiderer (1997) that the industry classification scheme does not affect the industry-country decomposition. Clearly, there are a range of issues here on which further research is need to explore the linkages between factor effects and their underlying determinants in portfolio investment.