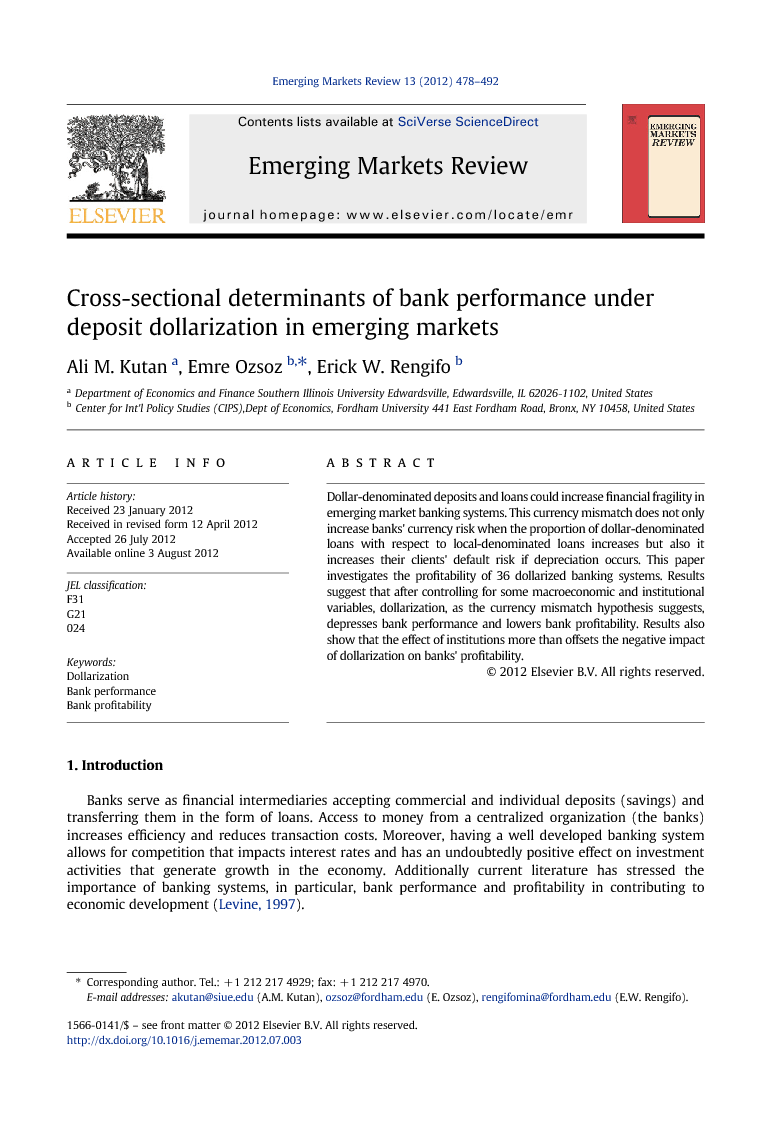 Dollar-denominated deposits and loans could increase financial fragility in emerging market banking systems. This currency mismatch does not only increase banks' currency risk when the proportion of dollar-denominated loans with respect to local-denominated loans increases but also it increases their clients' default risk if depreciation occurs. This paper investigates the profitability of 36 dollarized banking systems. Results suggest that after controlling for some macroeconomic and institutional variables, dollarization, as the currency mismatch hypothesis suggests, depresses bank performance and lowers bank profitability. Results also show that the effect of institutions more than offsets the negative impact of dollarization on banks' profitability.

Banks serve as financial intermediaries accepting commercial and individual deposits (savings) and transferring them in the form of loans. Access to money from a centralized organization (the banks) increases efficiency and reduces transaction costs. Moreover, having a well developed banking system allows for competition that impacts interest rates and has an undoubtedly positive effect on investment activities that generate growth in the economy. Additionally current literature has stressed the importance of banking systems, in particular, bank performance and profitability in contributing to economic development (Levine, 1997). Bank performance is determined by the adequate management of the relationship between risk and profitability. In this paper, we are interested in the risks related to the dollarization of liabilities in the banking system. Our aim is to explore the way in which this variable influences bank profitability. As mentioned earlier, bank profitability is a basic condition not only for the development of the banking systems and their stability but also for economic growth. However, the understanding on drivers of bank profitability in dollarized economies1 has not been covered in detail in the literature. In particular, the evaluation of bank performance in emerging market economies with high dollar-denominated deposits should recognize the effect of these deposits on their overall performance. In this paper we aim to contribute to the literature by incorporating the effect of deposit dollarization into the existing models on bank performance evaluation using a relatively large sample of emerging market economies. The main goal in this paper is to study the way in which financial dollarization, also known as asset substitution,2 affects bank profitability. We analyze the impact of dollar-denominated deposits in the banking system on the profitability of commercial banks. We measure dollarization by the ratio of foreign currency deposits in the system to the overall money supply in the economy, i.e., we use the level of foreign currency deposits in a country's banking system to the M2 money base.3 In order to isolate the effects of deposit dollarization on bank profitability, we use several macroeconomic (changes in GDP and inflation), financial (the interest rate spread, and the ratio of loan-loss-provisions to loans and the ratio of equity to total asset‐proxies for credit and capital risk) and institutional variables (government efficiency, political stability, regulatory quality, rule of law, voice and quality). Using data from 36 dollarized countries we show that, as expected, interest rate spreads have a positive and significant effect on bank profitability. However, the magnitude of these effects is smaller than those of other explanatory variables. This is also true with the effect of GDP on bank profitability. Under different econometric specifications and after controlling for the effect of macroeconomic, financial and institutional variables, we find that dollarization of deposits exert a negative and statistically significant impact on bank profitability with a one-period lag meaning that dollarization of the banking system has a pervasive effect on bank profitability. There are two possible explanations for this last result: First, bank managers in dollarized economies consider the previous period's dollarization ratios in determining current period holdings of cash and other assets, i.e. liquidity and asset management. This explanation also confirms the findings of De Nicolo et al. (2005) who showed that financial instability is higher in dollarized economies meaning that banks will consider their positions in foreign currency to construct their forecasted financial statements that will serve their liquidity and loan positions. This explanation also goes in hand with the findings of Rengifo et al. (2010) who demonstrate that deposit dollarization consistently and significantly exerts a negative impact on financial deepening, even in countries with moderate inflationary processes. In the context of this paper, this implies that during periods of high dollarization banks restrict credit to the private sector (decreasing the financial depth of the economy) preferring to hold more liquid positions or to fund less-risky projects (due to expected increasing financial instability in the future), which decreases their profitability. Second, as Currency Mismatch literature suggests there is a transfer from exchange risk into default risk in dollarized banking systems4 i.e. as banks increase their lending in foreign currency to compensate for increases in foreign currency deposits, they increase credit default risk. Thus, observing previous year dollarization in their accounts, bankers would likely increase reserves for possible loan losses next-year which could potentially reduce their profitability. Finally, it is important to note that having strong institutions appears to have a significant, positive and stronger effect on bank profitability than the macroeconomic and dollarization variables mentioned before.5 The remainder of this paper is organized as follows. Section 2 presents a brief literature review on previous studies about dollarization and bank profitability; Section 3 describes the methodology and the data used in this paper. Section 4 presents the results and, Section 5 concludes and presents future areas of research.

Financial institutions in dollarized economies accept foreign currency deposits and usually make loans in foreign currencies in an attempt to protect themselves from the exchange rate risk they are exposed to. This practice however does not provide a hedge against exchange rate fluctuations; it only substitutes loan default risk in place of exchange rate risk leaving banks still vulnerable to fluctuations in the value of foreign currency. Moving from this assumption, we have set out to study the performance of commercial banks in 36 dollarized economies to see what effect the existence of dollar deposits within the banking system has on the performance of banks. We used the level of foreign currency deposits in a country's banking system to the M2 money base as our dollarization measure and we estimated bank performance using bank profits before taxes; adjusted by the total assets as the dependent variable. In our modeling we have followed previous research on bank performance estimation and used not only bank and industry specific variables such as credit quality measured by the ratio of bank loan loss provisions to overall loans and bank capital ratio (measured simply as equity to total assets) but also country specific macrovariables including inflation, economic growth, average intermediation spread and a measure of institutional quality to which we have added dollarization. We have used not only a fixed effects model but also a dynamic GMM model to see the robustness and consistency of our results. Under all econometric specifications, the results of our estimations suggest that deposit dollarization has a negative impact on banks' profitability with a time lag. While current period dollarization ratios do not seem to have any significant effect on banks' overall performance in an economy, previous period dollarization ratios have a robust and significant effect on bank profitability. The rationale for this can be explained by bank managers' adaptive expectations, and the fact that bank managers plan for the current period usually by reflecting on previous period data. Therefore, accounting for changes in deposit dollarization ratios should have at least a one-year time lag as bank managers manage their asset and liquidity positions. Bankers determine at the beginning of a year their portfolio composition and the level of their loan loss reserves that will have a direct impact on their banks' profitability. This result is confirmed in estimations regarding banks' cash holdings; bankers prefer to hold more liquid or less-risky portfolio positions in the presence of high deposit dollarization decreasing lending and reducing in this way their profitability. Another interesting finding in our analysis refers to the prominent effect of institutions on banks' profitability and cash holdings. Banks in countries with strong institutions more than offset the negative impact of dollarization on their profitability and hold lower cash positions. This finding is robust in all models tested. In summary, even though dollarization negatively and consistently affects banks' profitability either directly or through increased bank cash holding positions, the impact of institutional quality seems to be more important. Thus, policy makers may deal with the negative effects of dollarization on bank profits by improving their institutions' quality (Government Efficiency, Political Stability, Regulatory Quality, Rule of Law, Voice, and Corruption).