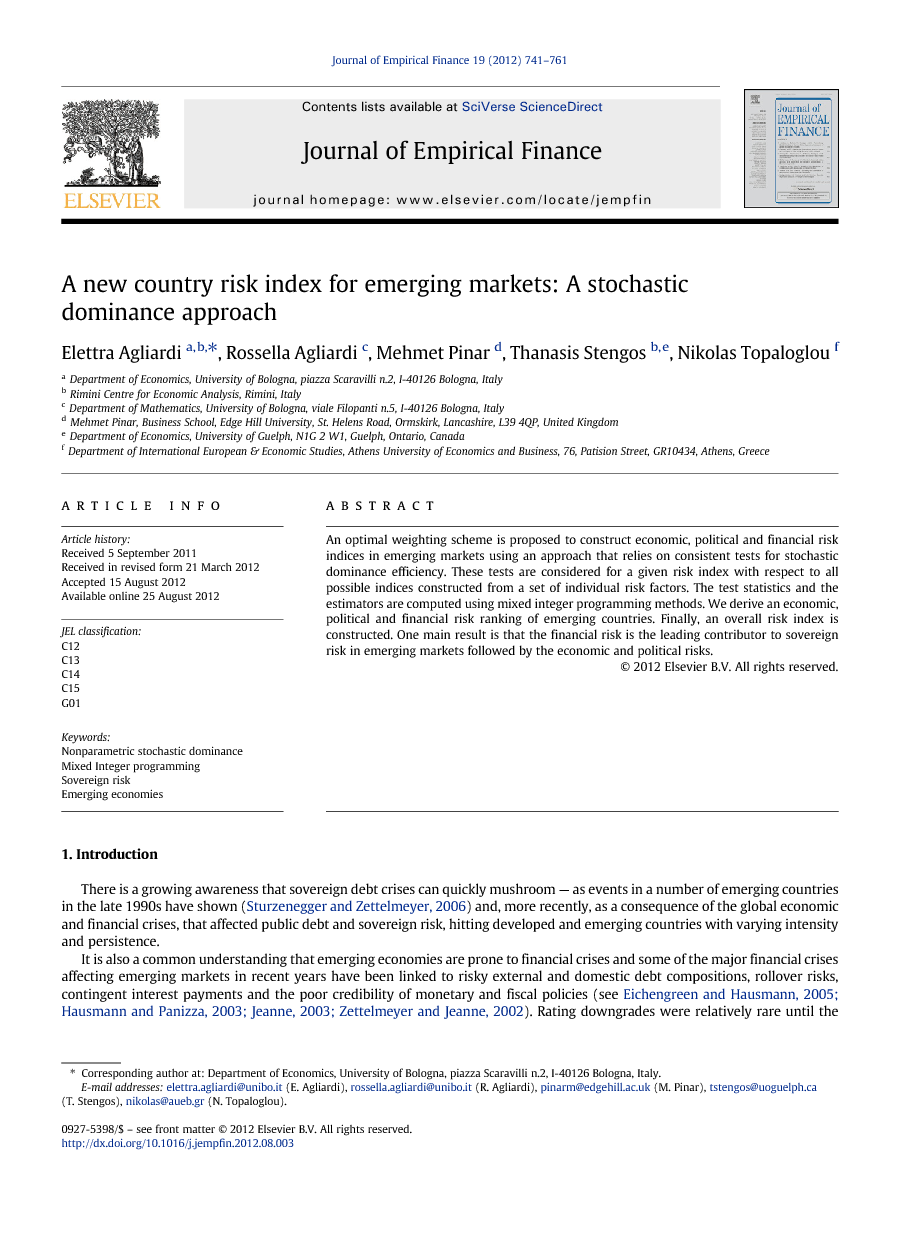 An optimal weighting scheme is proposed to construct economic, political and financial risk indices in emerging markets using an approach that relies on consistent tests for stochastic dominance efficiency. These tests are considered for a given risk index with respect to all possible indices constructed from a set of individual risk factors. The test statistics and the estimators are computed using mixed integer programming methods. We derive an economic, political and financial risk ranking of emerging countries. Finally, an overall risk index is constructed. One main result is that the financial risk is the leading contributor to sovereign risk in emerging markets followed by the economic and political risks.

This paper uses stochastic dominance efficiency tests at any order for time dependent data. We study tests for stochastic dominance efficiency of a given index with respect to all possible indices constructed from a set of individual components. We proceed to test whether stochastic dominance efficiency justifies the use of the arbitrarily-weighted risk indices obtained by rating agencies for the sovereign risk assessment: economic, political and financial risks. The results from the empirical analysis indicate that equally weighting risk factors in each sub-index does not produce an optimal index in the SD efficiency sense. We can construct many alternative indices that dominate the equally weighted sub-index risk value and assign a riskier environment to each emerging market country. Moreover, we construct an overall risk index and the results show that the financial risk is the main contributor to the overall sovereign risk environment in emerging markets followed by economic and political risks. The implications of these results are important. We propose the riskiest factors in economic, political and financial terms for emerging countries. Higher sovereign risk among emerging markets over time can be mainly attributed to financial factors and as such reducing overall risk for a particular country would imply improvements of this country's financial institutions. Secondly, an emerging market country should have high growth rates, export more and have a positive budget balance to be less subject to economic risk; decrease the level of corruption, have fair legal systems and improve its institutional effectiveness in order to reach a better political environment; increase liquidity and decrease banking sector risk to achieve a better financial institutional environment. We should mention that the upper and lower bounds of each index may change over time; therefore, we should mention that the weighting scheme assigned to each index may change over time. Moreover, there may be a major improvement and/or deterioration of risk factors in each sub-index over time for emerging countries. Furthermore, one may expect that there may be some other risk factors found to be important in the future not captured in the current analysis. Since the optimal weighting scheme in the construction of the each sub-index changes i) as the bounds change, ii) if there is major improvement or deterioration of some risk factors for emerging countries and iii) with the inclusion of some other risk factors in the analysis, the stochastic dominance efficiency of the optimal risk indices should be tested periodically. As a further research, one could employ other consistent SD pairwise tests, like in Linton et al. (2005) and Gonzalo and Olmo (2010), to determine whether one year has riskier outcomes than another year and/or whether some risk indicators are riskier than others in a given year using a pairwise comparison. It is also possible to determine the riskiest time periods for emerging markets and further analyze the main factors that precipitated this high risk environment. Another possible extension is to employ SD efficiency tests to analyze shorter span data to obtain optimal weights in order to refine the forecast of future sovereign crises. Finally, our methodology could be fruitfully applied to other group of countries, and in particular to mature economies where the risk of sovereign debt crises has increased dramatically.