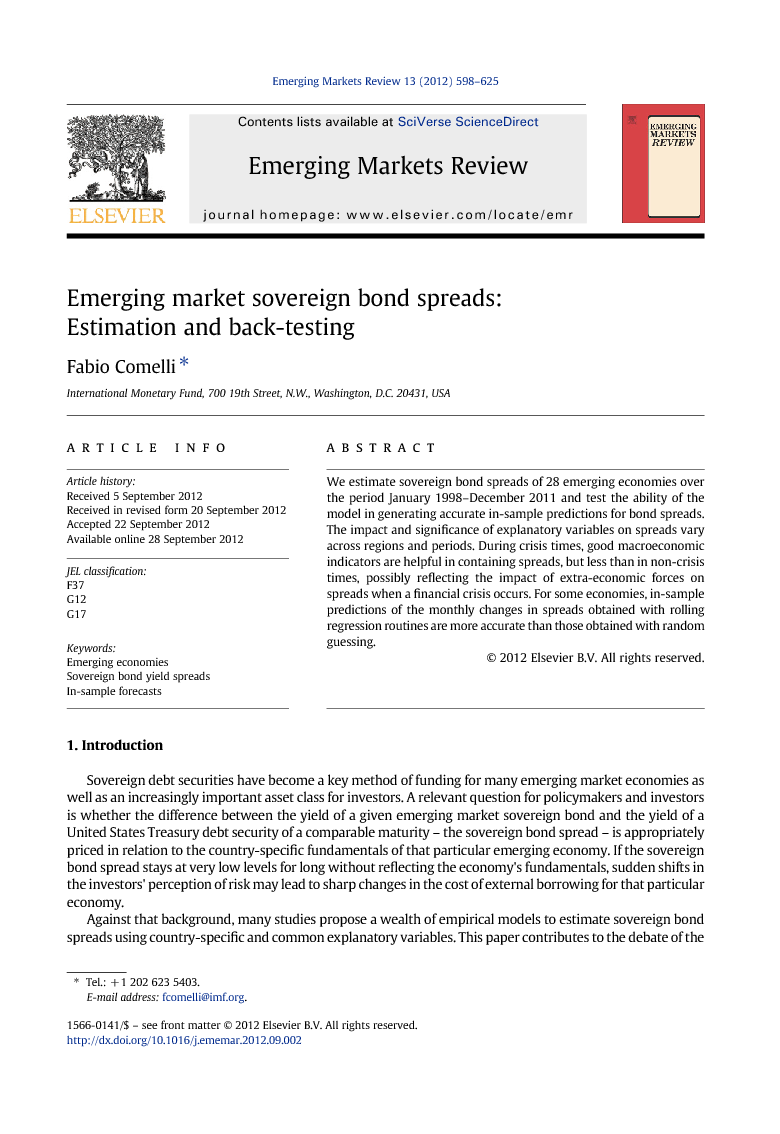 We estimate sovereign bond spreads of 28 emerging economies over the period January 1998–December 2011 and test the ability of the model in generating accurate in-sample predictions for bond spreads. The impact and significance of explanatory variables on spreads vary across regions and periods. During crisis times, good macroeconomic indicators are helpful in containing spreads, but less than in non-crisis times, possibly reflecting the impact of extra-economic forces on spreads when a financial crisis occurs. For some economies, in-sample predictions of the monthly changes in spreads obtained with rolling regression routines are more accurate than those obtained with random guessing.

Sovereign debt securities have become a key method of funding for many emerging market economies as well as an increasingly important asset class for investors. A relevant question for policymakers and investors is whether the difference between the yield of a given emerging market sovereign bond and the yield of a United States Treasury debt security of a comparable maturity – the sovereign bond spread – is appropriately priced in relation to the country-specific fundamentals of that particular emerging economy. If the sovereign bond spread stays at very low levels for long without reflecting the economy's fundamentals, sudden shifts in the investors' perception of risk may lead to sharp changes in the cost of external borrowing for that particular economy. Against that background, many studies propose a wealth of empirical models to estimate sovereign bond spreads using country-specific and common explanatory variables. This paper contributes to the debate of the role played by country-specific and global explanatory variables to explain emerging market sovereign bond spreads. Apart from macroeconomic and external vulnerability indicators, we consider an index for political risk among the country-specific explanatory variables. We also contribute to the empirical literature by testing the ability of our empirical model in generating accurate in-sample predictions for bond spreads. In this context, this study attempts to answer the following questions. Does the contribution of country specific variables change when the time and country dimensions of the panel change? Can an empirical model – used to estimate sovereign bond spreads – generate in-sample predictions for sovereign bond spreads which are more informative than those obtained with random guessing? Following Hartelius (2006), we estimate emerging economy sovereign bond spreads using a panel of 28 emerging economies, over the period January 1998–December 2011 and allow for the dimensions of the panel to change. After estimation, we back-test the model by generating bond spread in-sample predictions with linear predictions and rolling regression routines. We are interested to establish (i) which of the methods is more successful at correctly predicting the direction of the monthly change in bond spreads, (ii) whether the forecasting accuracy of each method changes before and after the global financial turmoil of 2008, and (iii) to test whether the forecasting methods employed are more accurate than a random walk in predicting the monthly change in bond spreads. In the first part of the paper, we find that better country-specific fundamentals are associated with lower bond spreads, although their impact on spreads varies across periods and regions. This implies that over time and across regions of emerging economies investors do not always assign the same importance to country-specific variables when investing in emerging economies' sovereign bonds. We also find that the impact of global explanatory variables, as well as their statistical significance, in explaining bond yield spreads changes with the economic period considered.1 Specifically, US short and long-term interest rates are no longer significant if the time dimension of the panel includes only the period beginning with the latest Global Financial Crisis. In addition, the model fails to explain well the rising bond spreads observed in some of the emerging economies between 2010 and 2011. This could reflect concerns that international investors might have about the potential impact of the euro area economic downturn on emerging economies and on their borrowing costs. Finally, we find that during crisis times, good macroeconomic fundamentals are helpful in containing bond yield spreads, but less than in non-crisis times. This might reflect the likely impact of extra-economic forces on bond yield spreads when a financial crisis occurs. In the second part of the paper, we assess the ability of the model to generate accurate predictions for bond spreads. For some emerging economies – Colombia, Mexico, and Poland – forecasts of the monthly changes in actual bond spreads obtained with rolling regression routines are significantly more accurate than forecasts obtained with a random walk model. The results enrich the literature because they suggest that rolling regression method can in some cases be more accurate than a random walk model in generating predictions for bond spreads, perhaps reflecting the fact that rolling regression routines allow to gradually enrich the information set available to investors. This paper is structured as follows. Section 2 contains a review of the relevant literature for this study. Section 3 describes the data while Section 4 describes the empirical methodology employed. Section 5 presents the estimation results while the back-testing exercise of the model is presented in Section 6. Concluding remarks are in Section 7.