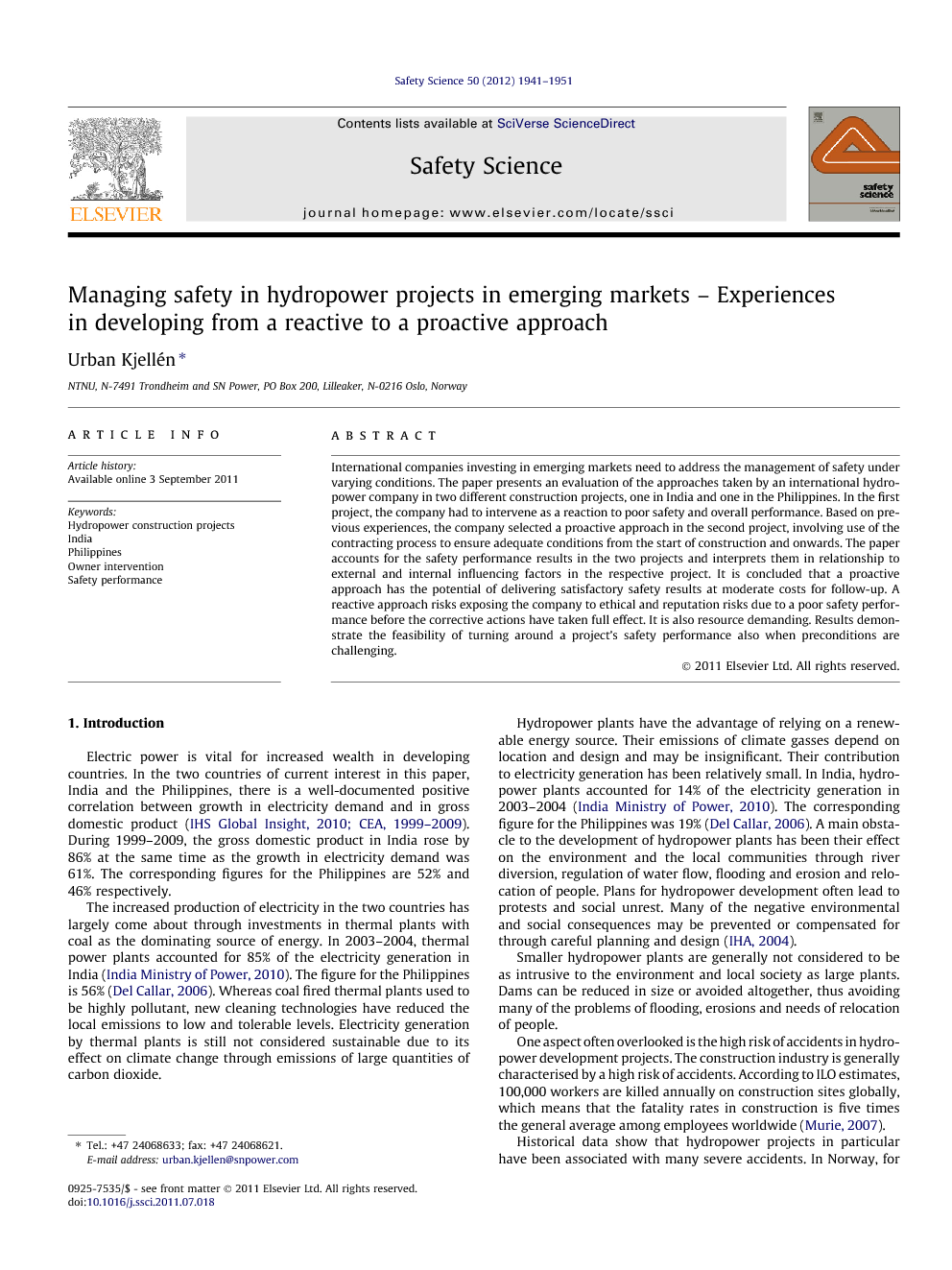 International companies investing in emerging markets need to address the management of safety under varying conditions. The paper presents an evaluation of the approaches taken by an international hydropower company in two different construction projects, one in India and one in the Philippines. In the first project, the company had to intervene as a reaction to poor safety and overall performance. Based on previous experiences, the company selected a proactive approach in the second project, involving use of the contracting process to ensure adequate conditions from the start of construction and onwards. The paper accounts for the safety performance results in the two projects and interprets them in relationship to external and internal influencing factors in the respective project. It is concluded that a proactive approach has the potential of delivering satisfactory safety results at moderate costs for follow-up. A reactive approach risks exposing the company to ethical and reputation risks due to a poor safety performance before the corrective actions have taken full effect. It is also resource demanding. Results demonstrate the feasibility of turning around a project’s safety performance also when preconditions are challenging.

Electric power is vital for increased wealth in developing countries. In the two countries of current interest in this paper, India and the Philippines, there is a well-documented positive correlation between growth in electricity demand and in gross domestic product (IHS Global Insight, 2010 and CEA, 1999–2009). During 1999–2009, the gross domestic product in India rose by 86% at the same time as the growth in electricity demand was 61%. The corresponding figures for the Philippines are 52% and 46% respectively. The increased production of electricity in the two countries has largely come about through investments in thermal plants with coal as the dominating source of energy. In 2003–2004, thermal power plants accounted for 85% of the electricity generation in India (India Ministry of Power, 2010). The figure for the Philippines is 56% (Del Callar, 2006). Whereas coal fired thermal plants used to be highly pollutant, new cleaning technologies have reduced the local emissions to low and tolerable levels. Electricity generation by thermal plants is still not considered sustainable due to its effect on climate change through emissions of large quantities of carbon dioxide. Hydropower plants have the advantage of relying on a renewable energy source. Their emissions of climate gasses depend on location and design and may be insignificant. Their contribution to electricity generation has been relatively small. In India, hydropower plants accounted for 14% of the electricity generation in 2003–2004 (India Ministry of Power, 2010). The corresponding figure for the Philippines was 19% (Del Callar, 2006). A main obstacle to the development of hydropower plants has been their effect on the environment and the local communities through river diversion, regulation of water flow, flooding and erosion and relocation of people. Plans for hydropower development often lead to protests and social unrest. Many of the negative environmental and social consequences may be prevented or compensated for through careful planning and design (IHA, 2004). Smaller hydropower plants are generally not considered to be as intrusive to the environment and local society as large plants. Dams can be reduced in size or avoided altogether, thus avoiding many of the problems of flooding, erosions and needs of relocation of people. One aspect often overlooked is the high risk of accidents in hydropower development projects. The construction industry is generally characterised by a high risk of accidents. According to ILO estimates, 100,000 workers are killed annually on construction sites globally, which means that the fatality rates in construction is five times the general average among employees worldwide (Murie, 2007). Historical data show that hydropower projects in particular have been associated with many severe accidents. In Norway, for example, hydropower played an important role in the development of infrastructure during the last century, and high fatality rates were tacitly tolerated by society. There were 23 fatalities in the Tokke 1GW project, which was completed during the period 1956–1972 (Skjold, 2006). Improved technology that reduced the number of workers at the risk exposed sharp end, and improved safety management routines decreased this number. The Ulla-Førre 2GW project was completed between 1974 and 1984 with three fatalities. There were zero fatalities in the 182 MW Tyin project in 2001–2004. There is no reliable statistics on fatalities in hydropower projects in India and the Philippines. Accident rates in the general construction industry are high, especially in India with the world’s highest accident rate among construction workers according to ILO estimates as quoted by RICS (2009). There are no reliable accident statistics for the Philippines. The Bureau of Labor and Employment Statistics in the Philippines reported four fatalities in construction in 2003 which is likely far too low (BLES, 2008).

The study has demonstrated that a proactive approach, involving use of the contracting process to accomplish the necessary preconditions for a safe execution of a construction project, has definite advantages. It has the potential of delivering satisfactory safety results at moderate costs for follow-up. A disadvantage with the reactive approach is poor safety performance in the period before the corrective actions have been implemented and have taken full effect. It is also resource demanding and requires endurance. In both studied projects, the IHC’s interventions have included improvements in general project management with safety as an important component, and the results show the adequacy of this holistic approach. Some of the differences between the projects may be explained by project specific conditions and differences in prevailing norms regarding risk acceptance in the two countries. It is likely that, due to cultural differences, the application of a proactive approach will be more resource-demanding in India, as compared to the Philippines.