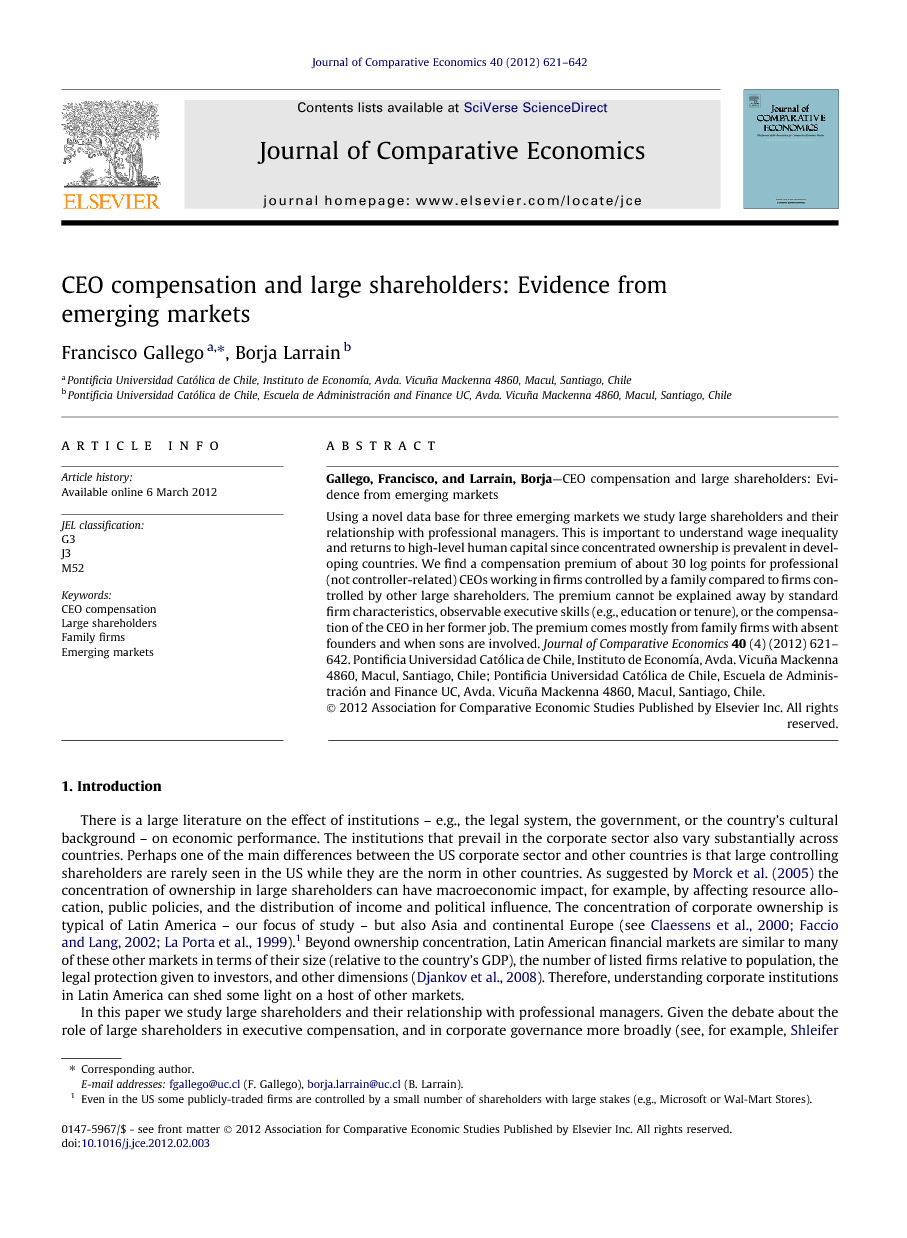 Using a novel data base for three emerging markets we study large shareholders and their relationship with professional managers. This is important to understand wage inequality and returns to high-level human capital since concentrated ownership is prevalent in developing countries. We find a compensation premium of about 30 log points for professional (not controller-related) CEOs working in firms controlled by a family compared to firms controlled by other large shareholders. The premium cannot be explained away by standard firm characteristics, observable executive skills (e.g., education or tenure), or the compensation of the CEO in her former job. The premium comes mostly from family firms with absent founders and when sons are involved.

The effect of large shareholders on executive compensation and other corporate policies is a topic of much debate. Our study comes to complement this literature by presenting empirical evidence on the relationship between different types of large shareholders and CEO compensation. This is an important concern for managers around the emerging and developing world given that a large fraction of firms are controlled by large shareholders. Data on managerial compensation in environments with large shareholders is very hard to get (Fan et al., 2011), so our paper provides a unique opportunity to examine this issue. We find that family ownership translates into higher CEO compensation, but not into higher compensation for other executives below the CEO. We find a premium of about 30 log points for professional CEOs working in family firms, after controlling for several individual and firm specific characteristics, and after using alternative econometric techniques. On the other hand, firms controlled by foreigners (mostly foreign corporations), the state, and shareholder coalitions do not pay a significant premium at the CEO level. We observe differences in executives’ careers in some of these other types of firms (e.g., in tenure or internal promotion), but these cannot account for the compensation differentials that we uncover. We find that observable skills (general or firm-specific) are not able to account for the family premium. Former compensation, which can capture unobservable skills, does not predict that a particular CEO will be hired by a family firm in the future. Ultimately, it is hard to tell apart what piece of the family premium corresponds to compensation for managerial skills, private benefits, career risk, or rent extraction. All of these different mechanisms may work simultaneously, or may be more important for certain firms or certain time periods than for others. We find that the family premium comes mostly from family firms with absent founders and where children of the founder are involved. We think this last result is important for the interpretation of our findings because it stresses the main difference of family firms with other forms of concentrated ownership: the involvement of an entire family, with its own family history, in the process of controlling and managing a firm. We believe that understanding how these factors determine the level and structure of executive compensation is an interesting area for future research.