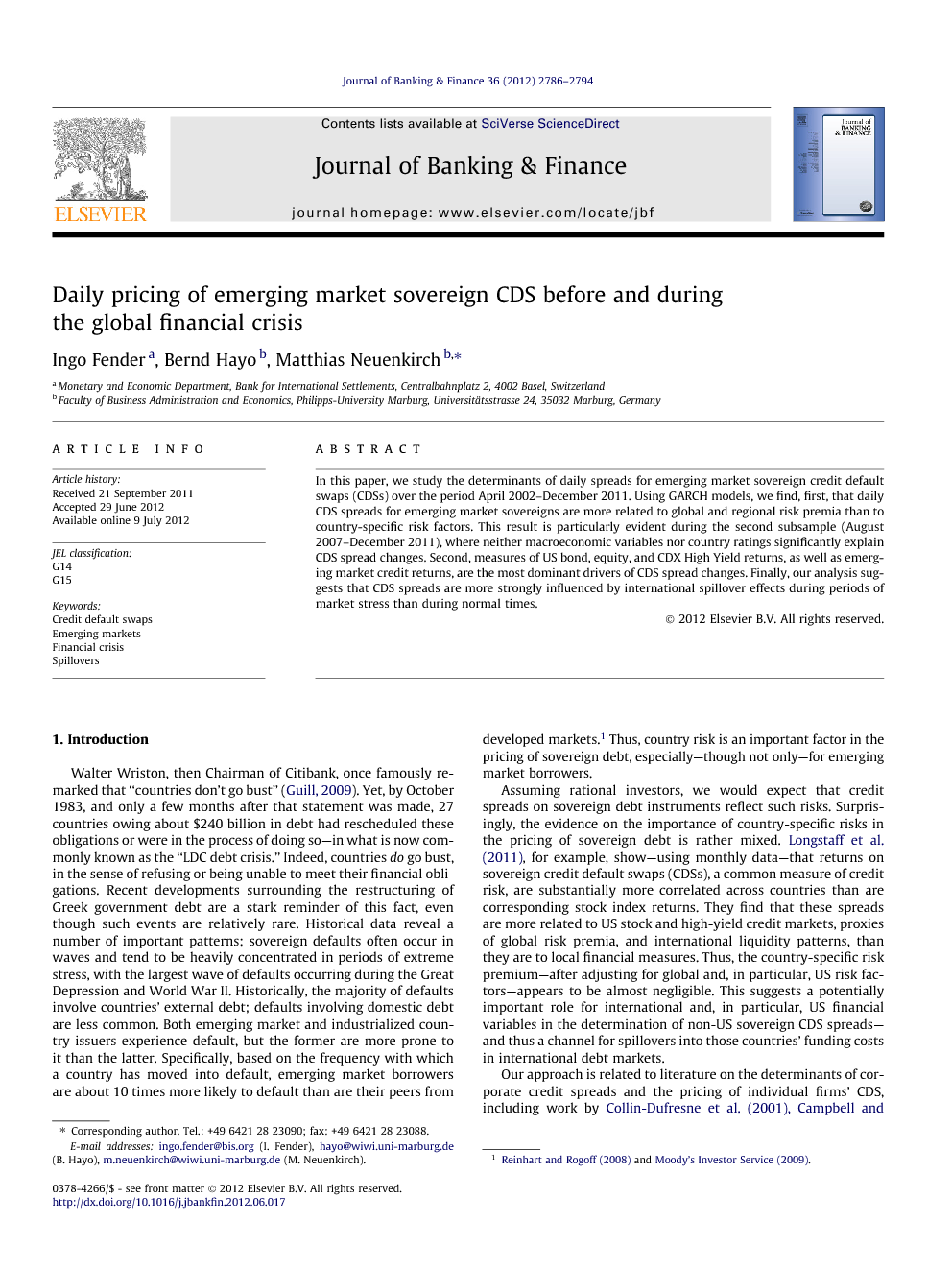 In this paper, we study the determinants of daily spreads for emerging market sovereign credit default swaps (CDSs) over the period April 2002–December 2011. Using GARCH models, we find, first, that daily CDS spreads for emerging market sovereigns are more related to global and regional risk premia than to country-specific risk factors. This result is particularly evident during the second subsample (August 2007–December 2011), where neither macroeconomic variables nor country ratings significantly explain CDS spread changes. Second, measures of US bond, equity, and CDX High Yield returns, as well as emerging market credit returns, are the most dominant drivers of CDS spread changes. Finally, our analysis suggests that CDS spreads are more strongly influenced by international spillover effects during periods of market stress than during normal times.

Credit default swaps, especially those involving sovereign issuers, are a hotly debated topic in both public and private circles, not least because of recent events involving Greece. Yet, even though these instruments have been around since the early 1990s, academic studies of CDS markets and of price determination in those markets are rare—at least compared to the level of interest in those instruments by those outside the academic community. To fill some of the gaps in the current literature, this paper investigates the determinants of daily spreads for emerging market sovereign CDS, focusing in particular on the effects of financial market spillovers for CDS pricing. Specifically, we use GARCH models estimated over the periods April 2002–July 2007 and August 2007–December 2011 to establish the impact of a broad range of potential influences, particularly that of international financial variables. Our study provides answers to three closely related questions regarding the importance of spillovers from broader financial markets for the determination of sovereign CDS spreads. First, our results suggest that daily CDS spreads for emerging market sovereigns are more related to global and regional risk premia than to country-specific risk factors, although idiosyncratic risk can play an important role for individual emerging market borrowers. This is in line with earlier findings that diversification opportunities from spreading fixed income investments across countries and regions might be more limited than expected (and more so for fixed income instruments than for equity market investments; see Longstaff et al., 2011). In particular, measures of US bond, equity, and CDX High Yield returns, as well as emerging market credit returns, are the most dominant drivers of CDS spreads. Second, we detect noteworthy differences in the determination of CDS spreads over time. During the early years of our sample, emerging market CDS spreads react to country-specific factors. This pattern changes dramatically during the financial crisis, as country-specific factors no longer play a statistically significant role. Finally, during the financial crisis, external (international) factors are more important for the determination of CDS spreads than are internal (domestic) factors, both in terms of statistical significance and economic importance. The impact of these variables increases by a factor of between 2.5 and 10 in the second subsample, thus supporting the conclusion that spillover effects play a much larger role during crisis periods than during more tranquil times. Overall, these findings support the possibility of significant international spillovers from developments in international and, particularly, US financial markets to emerging market sovereign borrowers. More specifically, as CDS premia are close proxies for the excess funding costs of sovereign borrowers relative to benchmark US Treasury yields, movements in US and other major financial markets can exert a meaningful influence on the funding costs of sovereign issuers, banks, and corporate borrowers from emerging market economies. By extension, policy measures taken in the major advanced economies can feed directly into the funding costs of their emerging market peers, at least temporarily. Finally, our finding that monetary policy decisions and their communication (see the robustness tests described in Section 4) can influence sovereign borrowers raises important issues in the context of current discussions about exit strategies from historically low, crisis-induced monetary policy rates. Put differently, monetary-policy-induced changes to these spreads, as a result of both policy actions and their communication, can have a potentially significant impact on the borrowing costs in emerging market economies. Country authorities may want to take these effects into account when devising their own policies.