عنوان انگلیسی
What matters and for which firms for corporate governance in emerging markets? Evidence from Brazil (and other BRIK countries)
دانلود فوری مقاله + سفارش ترجمه 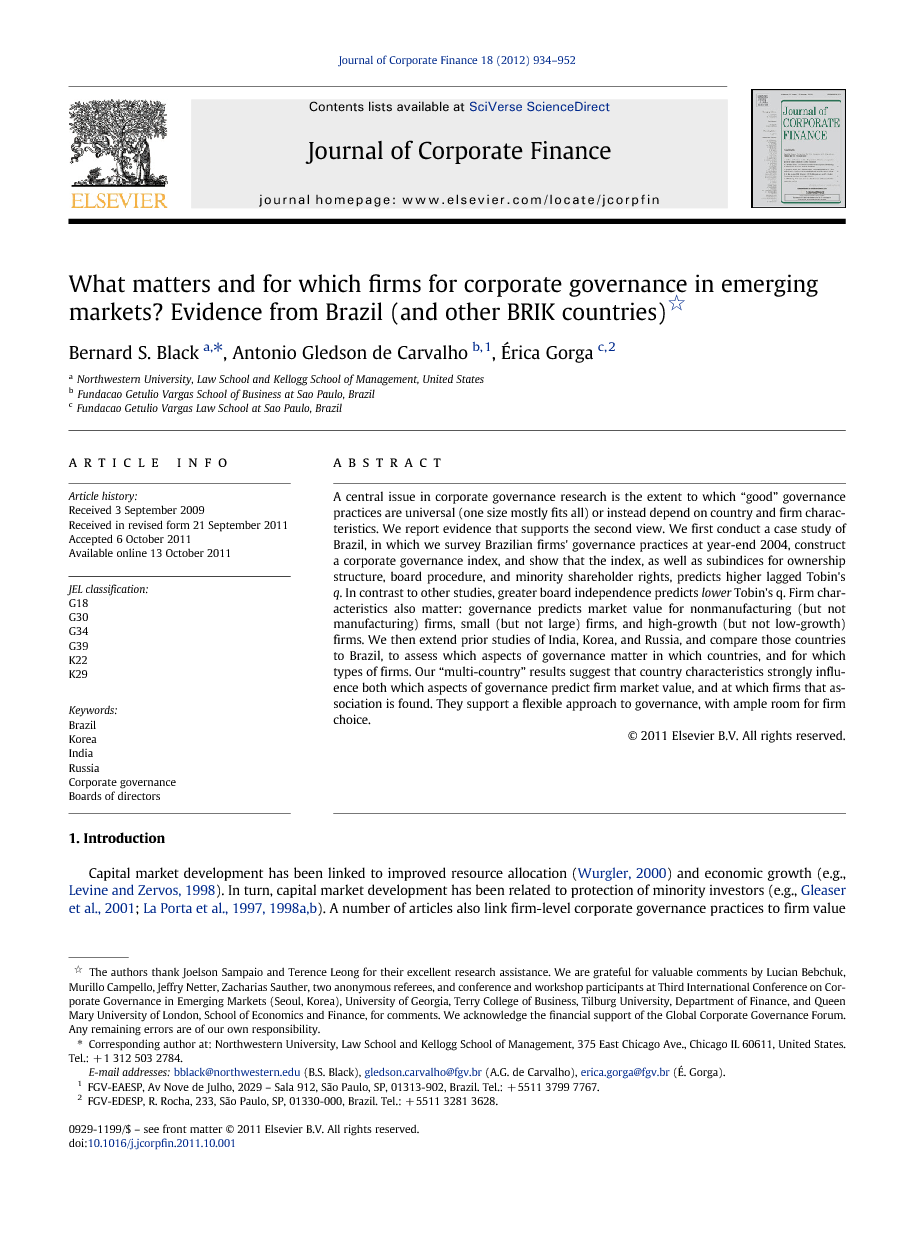 A central issue in corporate governance research is the extent to which “good” governance practices are universal (one size mostly fits all) or instead depend on country and firm characteristics. We report evidence that supports the second view. We first conduct a case study of Brazil, in which we survey Brazilian firms' governance practices at year-end 2004, construct a corporate governance index, and show that the index, as well as subindices for ownership structure, board procedure, and minority shareholder rights, predicts higher lagged Tobin's q. In contrast to other studies, greater board independence predicts lower Tobin's q. Firm characteristics also matter: governance predicts market value for nonmanufacturing (but not manufacturing) firms, small (but not large) firms, and high-growth (but not low-growth) firms. We then extend prior studies of India, Korea, and Russia, and compare those countries to Brazil, to assess which aspects of governance matter in which countries, and for which types of firms. Our “multi-country” results suggest that country characteristics strongly influence both which aspects of governance predict firm market value, and at which firms that association is found. They support a flexible approach to governance, with ample room for firm choice.

This article examines which aspects of governance matter and for which type of firms. We first conduct a case study of Brazil. We then assess commonalities and differences across four major emerging markets – Brazil, India, Korea, and Russia. For Brazil, we find an economically important relationship between an overall governance index and firm market value: a worst to best change in the index predicts almost a doubling in Tobin's q. Subindices for ownership, board procedure, and minority shareholder rights predict Tobin's q; while subindices for disclosure and related party transactions are insignificant. Strikingly we find a negative association between board structure, especially board independence, and market value. We find a significant association between corporate governance and market value for nonmanufacturing (but not manufacturing) firms, small (but not large) firms, and high-growth (but not low-growth) firms. Across the BRIK countries, we find both important commonalities and differences. Across countries, governance predicts higher market value in small firms and high-profitability firms. The small firm result is important because small firms are often unstudied. The result for high-profitability firms suggests that governance is at least as important for good performers as for poorly performing firms. A smaller wedge between voting rights and cash flow rights predicts higher market value in Brazil and Korea, the two countries where we have this measure. Board structure (independence): predicts higher market value in Korea, lower market value in Brazil, and is insignificant in India. Our analysis underscores the limits of broad cross-country analysis in assessing which aspects of corporate governance matter, for which firms. Use of a common index across many countries narrows the governance aspects and control variables that can be considered, making omitted variable biases likely. Moreover; an average effect across many countries doesn't tell us for which countries, and which firms, the aspect matters. Turning to policy implications, our results are not inconsistent with some mandatory minimum rules adding value. But in large part, they cast doubt on the wisdom of high regulatory minima, and on the extent to which different countries should adopt the same rules. Moreover, even if there are useful mandatory rules to be found, one can have little confidence as to what they are. An often better approach, our results suggest, will be to provide regulatory flexibility, coupled with sufficient disclosure so that investors can assess a company's governance choices. That flexibility could come through a comply-or-explain governance code, or as in Brazil, through firms choosing among different governance levels offered by the stock exchange. Overall, our results underscore how little we know about what matters for corporate governance in emerging markets and the core firm and country characteristics that predict when governance matters.