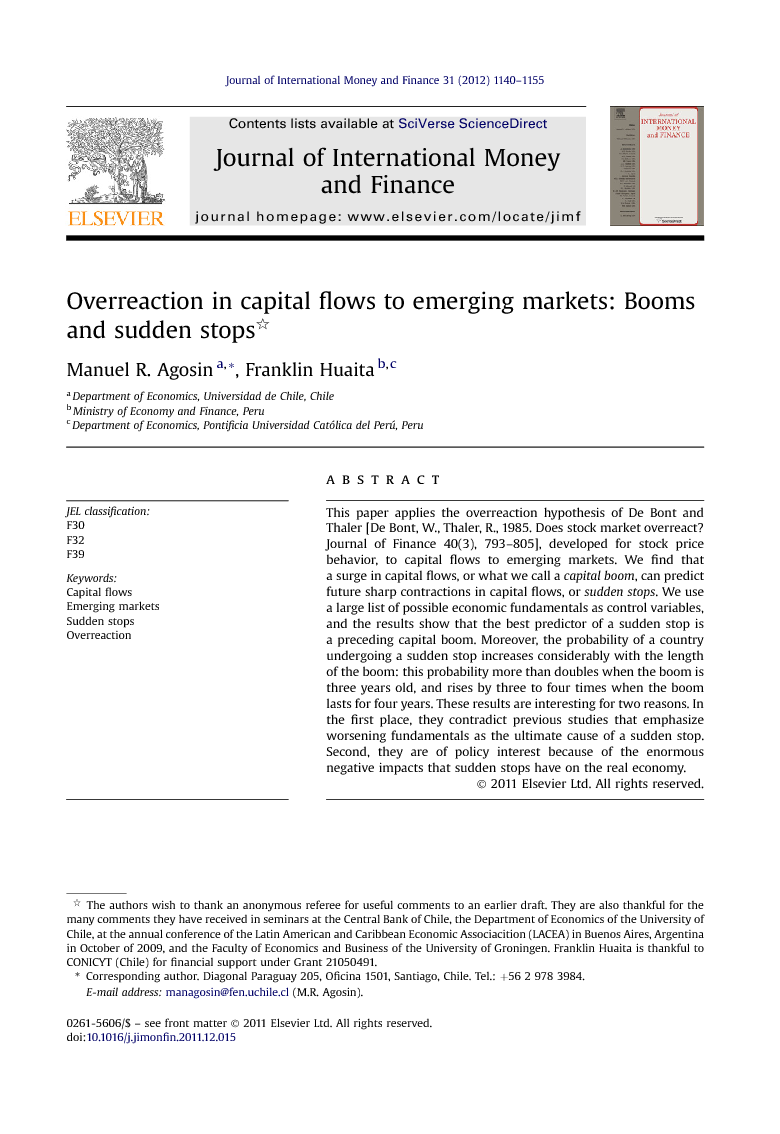 This paper applies the overreaction hypothesis of De Bont and Thaler [De Bont, W., Thaler, R., 1985. Does stock market overreact? Journal of Finance 40(3), 793–805], developed for stock price behavior, to capital flows to emerging markets. We find that a surge in capital flows, or what we call a capital boom, can predict future sharp contractions in capital flows, or sudden stops. We use a large list of possible economic fundamentals as control variables, and the results show that the best predictor of a sudden stop is a preceding capital boom. Moreover, the probability of a country undergoing a sudden stop increases considerably with the length of the boom: this probability more than doubles when the boom is three years old, and rises by three to four times when the boom lasts for four years. These results are interesting for two reasons. In the first place, they contradict previous studies that emphasize worsening fundamentals as the ultimate cause of a sudden stop. Second, they are of policy interest because of the enormous negative impacts that sudden stops have on the real economy.

Informal claims of overreaction in financial markets arise more frequently than what economists and analysts are prepared to admit, since they feel more comfortable anchoring stock price movements to informed expectations about future fundamentals. However, in a seminal work De Bont and Thaler (1985) evaluate what they call “overreaction” in the stock market and prove that, as is the case with many other human activities, financial markets show an excessive reaction to new information or unexpected events. One of their main conclusions is that a pronounced reversion in prices (negative returns) can be predicted by the observation of extreme preceding positive returns; in other words, an upward overreaction subsequently calls forth a dramatic downward adjustment. An important aspect of this literature is the identification of an overreaction, which is related to psychological factors that push a price much beyond what would be determined by fundamental factors. Consequently, examples of markets with frequent overreaction behavior are those showing excess volatility. Such is the case of capital flows to emerging markets, where an unexplained volatility has been found. In a recent paper, Broner and Rigobón (2006) showed that capital flows to emerging markets are more volatile than those to developed countries. Using GDP per capita, inflation rates, real depreciation of exchange rates, terms of trade and interest rates for a set of emerging countries, the standard deviation of the error from panel estimations was greater than the error from a panel using data for developed countries by more than 60 percent. This standard deviation was significantly reduced using own lags of capital flows and contagion variables. Our approach is different. We focus on the predictive power of a capital flow bonanza on subsequent and sharp reversions of capital flows, labeled sudden stops in recent literature, and consider this pattern as an example of overreaction. We define episodes of large capital flows to emerging markets, which we call capital booms, as those that are larger than a standard deviation above the historical mean and represent at least five percentage points of GDP. Using the definition of sudden stops by Guidotti et al. (2004), we define periods of abrupt reversions, or sudden stops, as those when capital flows decline by more than a standard deviation of their average variation during the sample period and when that decline is at least five percentage points of GDP. Similarly to the findings for stock prices, our results indicate that a capital-boom period is a good predictor of a subsequent sudden stop. Moreover, we find that the probability of a sudden stop increases dramatically the longer the preceding capital boom. In our approach, emerging markets should be seen as an asset class for financial markets.1Leijonhufvud (2007) confirms this view. She shows that financial institutions have separate business units that manage profit and loss targets for their investments in emerging markets. Leijonhufvud stresses that this organizational form is responsible for the concentration of risk in emerging markets and the consequent formation of bubbles in asset prices. In addition, compensation systems “which link annual bonus payments to the amount of net income an employee has generated for the firm or its clients in a given year directly encourage employees to focus on short-term income opportunities” (Leijonhufvud, 2007). These ideas are lent credence by Kaminsky et al. (2004). Using monthly and quarterly data, they showed the existence of chartist strategies (buy winners and sell losers) and contagion trading in mutual funds dedicated to Latin American assets. These strategies proved stronger during crises. In this paper, we use the financial account of the balance of payments (excluding reserve movements) as our closest measure of net capital flows. With an analysis of the probability of suffering a sudden stop, we test the relevance of prior capital booms. A capital-boom year is a period dominated by short run chartist strategies, as described previously. We find that the probability of a capital boom is significantly in countries that have experienced a capital boom the year before, and that this probability is very similar to the probability of suffering a sudden stop. However, as the capital boom lengthens, the probability of a subsequent sudden stop rises markedly, while the probability that the capital boom will continue drops to zero. In contrast to other studies such as those by Edwards, 2007 and Calvo et al., 2004 or Cavallo and Frankel (2004), who attribute to domestic variables the cause of sudden stops, our results indicate that sudden stops are downward overreactions to sharp preceding positive overreaction periods. This does not mean that fundamentals are unimportant in preventing a sudden stop episode. In fact, we postulate that large capital inflows can bring about an endogenous change in some macroeconomic variables – e. g., a deterioration of the current account deficit, a sharp appreciation of the real exchange rate, an excessive rise in bank credit to the private non-bank sector, or a progressive mismatch in the balance sheets of firms and banks that borrow in foreign currency. This deterioration in fundamentals caused by large capital booms that cannot be easily absorbed by economies with small financial sectors is what eventually triggers a massive withdrawal of capital.2 Many of these variables reflecting domestic fundamentals turn out not to be robust in their predictive power and are indeed rendered insignificant when measures of preceding capital booms are incorporated into the econometric analysis. This leads us to posit that large capital inflows are the best predictor of sudden stops in emerging economies. The rest of the paper is organized as follows. The next section sets forth the definitions of capital boom and sudden stop episodes. Section 3 describes the methodological analysis. Sections 4 and 5 present our main results and some robustness exercises, respectively. Finally, Section 6 provides some discussion and concluding remarks.

There is a large and growing literature on what triggers a sharp contraction in capital flows to emerging markets. The current account deficit, liability dollarization, or excessive credit expansion are some of the variables that figure prominently in this literature. However, sudden stops have not been seen as a consequence of a previous period of overreaction in international financial markets. Capital booms are episodes of excessive enthusiasm that are unwarranted by fundamentals. They also show in a very graphic way that chartist strategies rather than strategies based on future expectations of fundamentals dominate financial markets. In this sense, a capital boom will almost inevitably lead eventually to a sharp and sudden contraction. This means that deteriorating fundamentals are not always necessary to trigger a reversion of positive expectations; rather, it can be a rumor that disheartens the apparent optimism in a particular country, or international contagion that has little or no relationship with domestic conditions. An alternative explanation is that large capital inflows that are not easily (and productively) absorbed into the domestic economy induce a deterioration in one or more fundamentals, which function as a negative signal to investors. Recent studies of herd behavior in financial markets show that periods of overoptimism are fragile and can be suddenly reversed when participants face new information. Our application to capital flows to emerging markets confirms the overreaction hypothesis and its predictive power. Using other arguments of behavioral finance, one can predict that the reversion of capital flows will be sharper and shorter than the preceding bonanza. One example of such analyses is the loss-aversion hypothesis of Kahneman and Tversky (1979): faced with possible losses, investors will unload emerging market assets more quickly than they accumulated them during the boom. Unambiguously, if the recipient country faces a deterioration of its fundamentals, the probability of a quick reversion in capital flows can be very high. What are the policy implications of our analysis? Clearly, emerging countries contemplating integration into international financial markets should take into account that they may face a new source of volatility and should tread carefully in this new world.