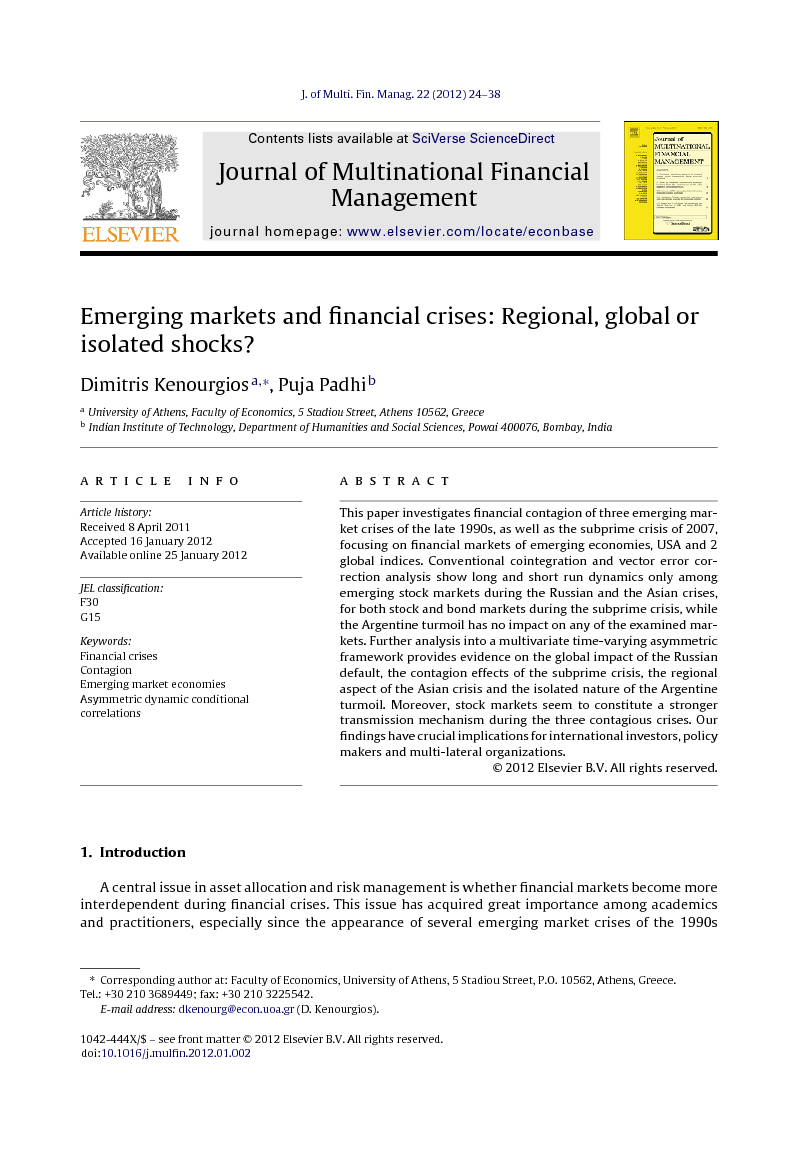 This paper investigates financial contagion of three emerging market crises of the late 1990s, as well as the subprime crisis of 2007, focusing on financial markets of emerging economies, USA and 2 global indices. Conventional cointegration and vector error correction analysis show long and short run dynamics only among emerging stock markets during the Russian and the Asian crises, for both stock and bond markets during the subprime crisis, while the Argentine turmoil has no impact on any of the examined markets. Further analysis into a multivariate time-varying asymmetric framework provides evidence on the global impact of the Russian default, the contagion effects of the subprime crisis, the regional aspect of the Asian crisis and the isolated nature of the Argentine turmoil. Moreover, stock markets seem to constitute a stronger transmission mechanism during the three contagious crises. Our findings have crucial implications for international investors, policy makers and multi-lateral organizations.

This paper investigates the correlated-information channel as a contagion mechanism for three emerging market crises of the late 1990s, as well as the subprime crisis of 2007, using data from equity and bond markets of EMEs from various regions around the world, USA and 2 global stock and bond indices. Through conventional cointergation and VEC analysis, we report long and short run dynamics only for stock markets during the Russian and Asian crises, for both stock and bond markets during the subprime crisis, while the Argentine crisis has no impact on any of the examined financial markets. To provide a more robust analysis of financial contagion, we also examine conditional correlation dynamics into a time varying asymmetric framework, applying the recently developed AG-DCC model. This empirical analysis elucidates how vulnerable emerging financial markets are to both emerging and global shocks and displays differences in crises dynamics that could be attributed to several factors. Results confirm the existence of asymmetric contagion to EMEs and globally only for the Russian default and the subprime crisis. Both crises hit those economies regardless of their economic integration, since cross-market correlation dynamics are driven by behavioral reasons, due to shifting investor sentiment (increased risk aversion), causing significant changes in the emerging countries’ financial structures. The other government default episode (Argentine crisis) examined in this paper has an isolated nature, due to the lower macroeconomic and financial vulnerability to shocks of emerging economies with close trade and financial ties to Argentina and the shifts in the emerging economies investor base due to earlier emerging market crises. On the other hand, the asymmetric contagious effects of the Asian crisis display strong intra-regional characteristics, due to the growing share of investment and trade in the region and the more common monetary policy followed by the Asian countries after the October crash of 1987. Our findings have important implications for international investors and portfolio managers. Evidence on contagion implies that diversification sought by investing in multiple markets from different regional blocks is likely to be lower when it is most desirable. As a result, an investment strategy focused solely on international diversification seems not to work in practice during turmoil periods. On the other hand, evidence provided on the lower spread of all four crises through bond markets indicate that, in times of distress, any potential benefits from international diversification are greater for the bond investors than the stock investors. Finally, since countries and financial markets react differently to sovereign shocks, combining bonds and stocks from different emerging economies could provide advantages over debt-only or equity-only portfolios. The results also provide useful implications regarding the ability of policy makers and multi-lateral organizations to insulate or at least attenuate an economy from contagious effects. The intra-regional contagious effects of the Asian crisis indicate the effectiveness of the co-ordinated rescue packages from the International Monetary Fund (IMF) to the most affected Southeast and East Asian (Thailand, Indonesia and South Korea). The rescue packages were of a considerable sum, as of July 1998 the combined value of the IMF rescue packages amounted to a total of $100 billion. Regarding the Argentine crisis, policy initiatives by both the IMF and EMEs (e.g., increased EME data dissemination, floating rate regimes) following previous crises have led to improvements in country surveillance. In the case of the Russian crisis, the high interest rates both in the U.S. and other economies after the shock led to widespread fears of a liquidity crash and raised questions about policy performance and coordination, despite the bailout of LTCM organized by the U.S. Fed and the followed expansionary monetary policy on a global base. Finally, the subprime crisis raised the need for a revamped international financial architecture. The global contagious effects of this crisis and the rejection of the decoupling hypothesis for the EMEs question the resilience and sustainability of emerging-market policy performance. It seems that strong economic indicators in many EMEs before the crisis (high growth rates, massive foreign exchange reserves, balanced budgets) were not enough to decouple them from the crisis, because of their cyclicality and endogeneity. A consequence of the contagion on EMEs would be the redirection of development loans by the World Bank, the IMF, and the regional development banks to the public sector, since those funds had been crowded out by private-sector lending throughout the boom decade (World Bank, Global Development Finance, 2008).