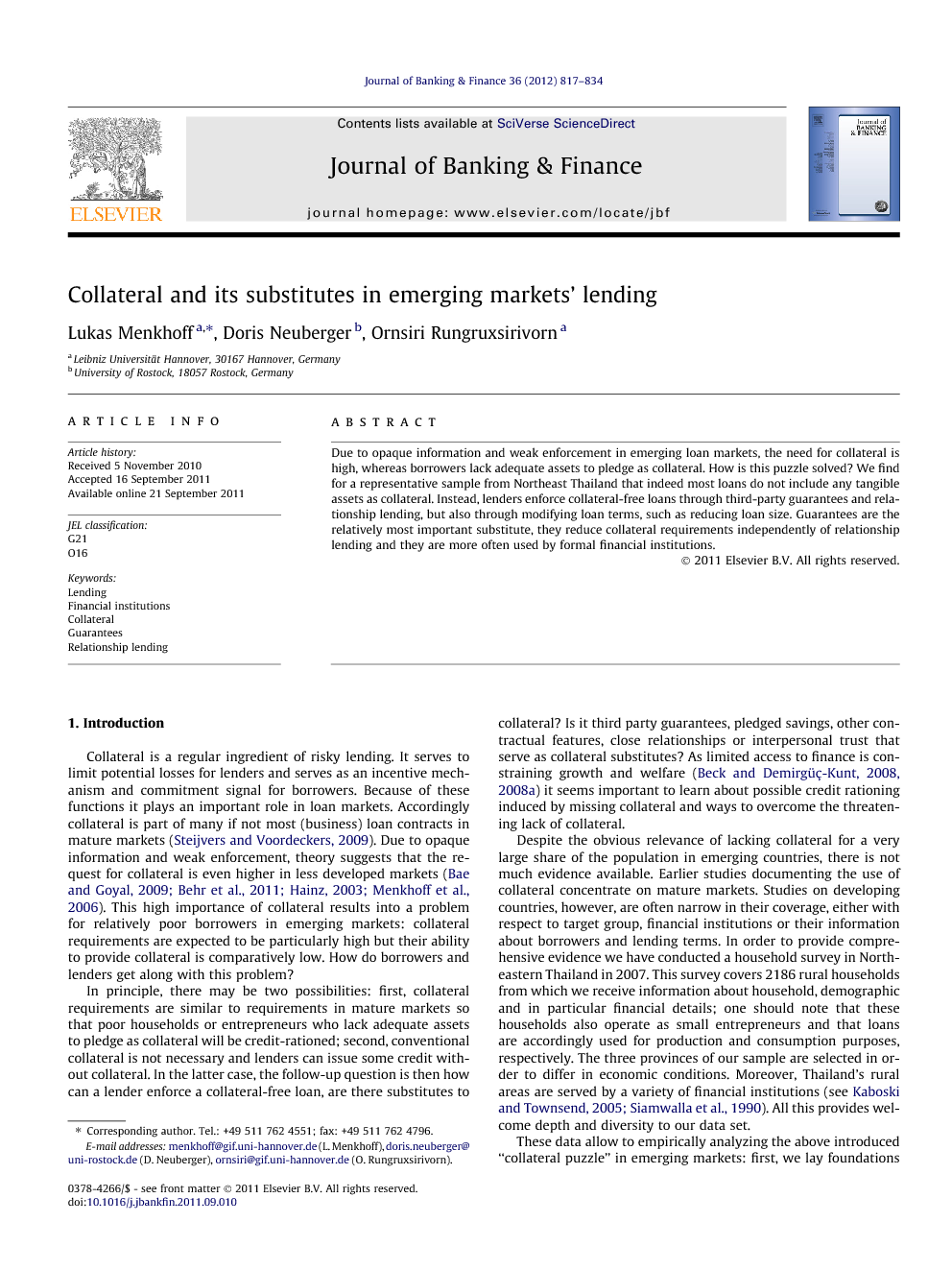 Due to opaque information and weak enforcement in emerging loan markets, the need for collateral is high, whereas borrowers lack adequate assets to pledge as collateral. How is this puzzle solved? We find for a representative sample from Northeast Thailand that indeed most loans do not include any tangible assets as collateral. Instead, lenders enforce collateral-free loans through third-party guarantees and relationship lending, but also through modifying loan terms, such as reducing loan size. Guarantees are the relatively most important substitute, they reduce collateral requirements independently of relationship lending and they are more often used by formal financial institutions.

Collateral is a regular ingredient of risky lending. It serves to limit potential losses for lenders and serves as an incentive mechanism and commitment signal for borrowers. Because of these functions it plays an important role in loan markets. Accordingly collateral is part of many if not most (business) loan contracts in mature markets (Steijvers and Voordeckers, 2009). Due to opaque information and weak enforcement, theory suggests that the request for collateral is even higher in less developed markets (Bae and Goyal, 2009, Behr et al., 2011, Hainz, 2003 and Menkhoff et al., 2006). This high importance of collateral results into a problem for relatively poor borrowers in emerging markets: collateral requirements are expected to be particularly high but their ability to provide collateral is comparatively low. How do borrowers and lenders get along with this problem? In principle, there may be two possibilities: first, collateral requirements are similar to requirements in mature markets so that poor households or entrepreneurs who lack adequate assets to pledge as collateral will be credit-rationed; second, conventional collateral is not necessary and lenders can issue some credit without collateral. In the latter case, the follow-up question is then how can a lender enforce a collateral-free loan, are there substitutes to collateral? Is it third party guarantees, pledged savings, other contractual features, close relationships or interpersonal trust that serve as collateral substitutes? As limited access to finance is constraining growth and welfare (Beck and Demirgüç-Kunt, 2008 and Beck and Demirgüç-Kunt, 2008a) it seems important to learn about possible credit rationing induced by missing collateral and ways to overcome the threatening lack of collateral. Despite the obvious relevance of lacking collateral for a very large share of the population in emerging countries, there is not much evidence available. Earlier studies documenting the use of collateral concentrate on mature markets. Studies on developing countries, however, are often narrow in their coverage, either with respect to target group, financial institutions or their information about borrowers and lending terms. In order to provide comprehensive evidence we have conducted a household survey in Northeastern Thailand in 2007. This survey covers 2186 rural households from which we receive information about household, demographic and in particular financial details; one should note that these households also operate as small entrepreneurs and that loans are accordingly used for production and consumption purposes, respectively. The three provinces of our sample are selected in order to differ in economic conditions. Moreover, Thailand’s rural areas are served by a variety of financial institutions (see Kaboski and Townsend, 2005 and Siamwalla et al., 1990). All this provides welcome depth and diversity to our data set. These data allow to empirically analyzing the above introduced “collateral puzzle” in emerging markets: first, we lay foundations by documenting the importance of collateral, second, we analyze the determinants of collateral including considering substitutes to collateral, and, third, we examine the use of the most important collateral substitutes. Regarding the importance of collateral we find that only about 15% of the 1671 loans in our sample are secured by various forms of collateral. Although there is some variation in cross-sections, such as household groups or borrowing purposes, the share of collateralized loans is consistently small throughout and does not exceed 25%. Moreover, the share of credit-constrained households is low at 11%, strongly indicating that lenders rely on substitutes to collateral in enforcing their interests. This empirical research is the first, according to best of our knowledge, to systematically consider several substitutes to collateral in order to fully understand the role of collateral in lending to poor borrowers in emerging markets. We do indeed find that collateral is significantly less often required if there is either a third party guarantee or a case of relationship lending. The use of collateral is also related to other loan terms where collateral obviously serves to reduce the lender’s risk: more collateral is required for larger loans, for longer loan duration and for lower interest rates. As a third group of determinants we investigate household characteristics and possible default risk with little success. It is only better education that is related to less collateral requirements. As the data set unusually covers two important collateral substitutes, i.e. guarantees and relationship lending, we are able to examine their use in the same market. We find that guarantees are relatively more important, that both substitutes work independently of each other and tend to substitute each other, that guarantees are relatively more important at formal financial institutions and that the marginal effect of these substitutes is independent of loan size. These findings extend recent literature emphasizing the importance of either guarantees or relationship lending in less developed markets as means to overcome information and incentive problems. We are not aware that there is an earlier study on emerging markets where all these determinants of the use of collateral – including substitutes to the use of collateral – were considered within a unified approach. Closest in coverage is Ono and Uesugi (2009) for small firms in Japan where, however, collateral is very widely used and thus plays another role than in our case. Usually, studies rely on a subset of the following determinants: guarantees, relationship, loan term and borrower characteristics. Our study shows, however, that all of these groups of determinants are important in analyzing the use of collateral and thus should not be missed in empirical work. The paper is organized in four more sections. Section 2 provides an overview of the theoretical and empirical literature which shapes expectations to be examined. Section 3 informs about the data used in this study and the characteristics of borrowers and lenders in the rural areas. In Section 4 we examine the use of collateral by descriptive statistics. The hypotheses on the determinants of collateral are tested by multivariate analyses in Section 5. Section 6 concludes.

This paper examines the use of collateral in lending to relatively poor households in emerging countries, i.e. this research targets at a large fraction of world-wide population. Collateral is an important instrument for lending institutions. In general, collateral limits potential losses to the lenders in case of loan defaults and reduces borrowers’ incentives to default. Due to opaque information and weak enforcement, theory suggests that the incidence of collateral is even higher in developing markets. This high importance of collateral results into a problem for poor households in developing countries: collateral requirements are expected to be particularly high for this group but their ability to provide collateral is comparatively low. How do borrowers and lenders deal with this collateral puzzle? Our empirical examination yields three main findings. First, in describing the use of collateral, we find that conventional collateral is indeed rarely used and that most loans to poor households do not include any tangible assets as collateral. Remarkably, the lack of assets (which could serve as collateral) does not seem to exclude the poor from credit access, because they do not have a higher probability of credit rationing than the rich. Thus, the puzzle is “solved” by creating other means of credit enforcement than by relying on collateral, i.e. by collateral substitutes. In principle, the substitution mechanisms may also work in advanced markets. Our second main finding reveals determinants of the use of collateral: lenders can enforce collateral-free loans through third party guarantees and relationship lending. In particular, third-party guarantees and repeated borrowing from the same lender significantly reduce the pledging of collateral. Moreover, reducing loan size and duration and increasing the interest rate also substitute collateral. Our results do not show a significant impact of the borrower’s wealth, savings and default risk on the use of collateral. The dominant means of loan enforcement are reliance on guarantees and relationship lending which both substitute collateral in emerging markets’ lending. In our sample, guarantees are relatively more important than relationship lending, both substitutes work independently of each other and thus tend to substitute each other. Moreover, third-party guarantees are relatively more important at formal financial institutions that lend at arm’s length, and the marginal effect of these substitutes is independent of loan size. These results show the benefits of collateral and its substitutes for more favorable loan terms and for an easier access to finance. Although our data stem from a particular emerging market, the substitution process at work may well apply to other markets too. For example, whenever the ownership of land is not easily transferable as is the case in rural Thailand, there emerges a lack of conventional collateral and substitutes become particularly urgent. From a policy perspective it seems important to support easier collateralization as well as its substitutes of guarantees and relationship lending. The analyses show that more available instruments to deal with risk in emerging markets’ lending to poor households really help more.