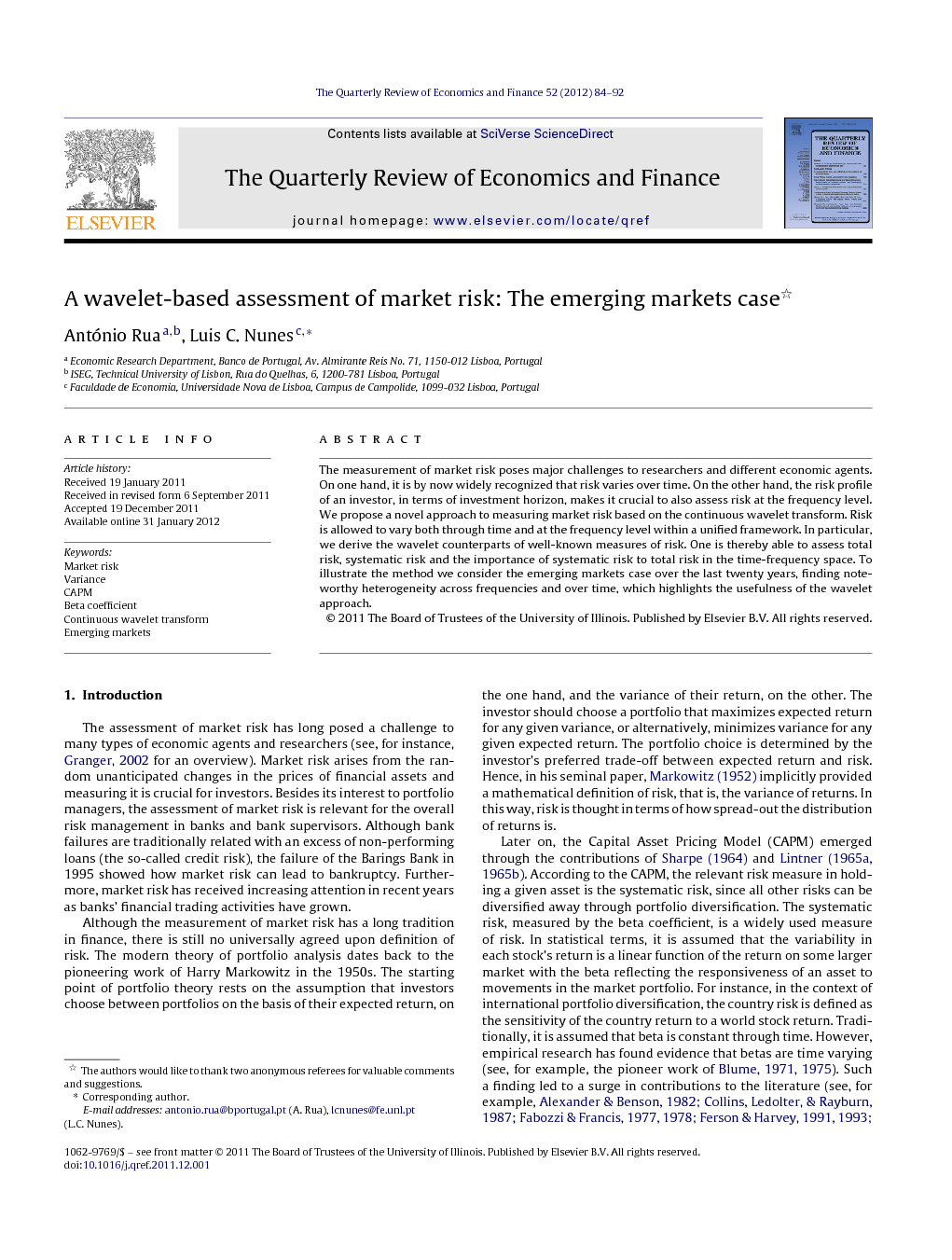 The measurement of market risk poses major challenges to researchers and different economic agents. On one hand, it is by now widely recognized that risk varies over time. On the other hand, the risk profile of an investor, in terms of investment horizon, makes it crucial to also assess risk at the frequency level. We propose a novel approach to measuring market risk based on the continuous wavelet transform. Risk is allowed to vary both through time and at the frequency level within a unified framework. In particular, we derive the wavelet counterparts of well-known measures of risk. One is thereby able to assess total risk, systematic risk and the importance of systematic risk to total risk in the time-frequency space. To illustrate the method we consider the emerging markets case over the last twenty years, finding noteworthy heterogeneity across frequencies and over time, which highlights the usefulness of the wavelet approach.

Although most textbook models assume volatilities and covariances to be constant, it has long been acknowledged among both finance academics and practitioners that market risk varies over time. Besides taking into account such time-varying feature, the risk profile of an investor, in terms of investment horizon, makes it also crucial to assess risk at the frequency level. Naturally, a short-term investor is more interested in the risk associated with high frequencies whereas a long-term investor focuses on lower frequencies. This paper provides a new look into market risk measurement by resorting to wavelet analysis, as it allows one to evaluate the time and frequency-varying features within a unified framework. In particular, we derive the wavelet counterpart of well-known measures of market risk. We consider total risk, as measured by the variance of returns, the systematic risk, captured by the beta coefficient, and we provide the tools to assess the importance of systematic risk on total risk in the time-frequency space. To illustrate the method, we consider the emerging markets case, which has received a great deal of attention in the literature over the last twenty years. As those countries have experienced a changing economic environment, it is particularly interesting to see how market risk has changed across frequencies and over time. We find that the variance of monthly returns is determined essentially by short-run fluctuations and that the volatility has changed over time. In particular, the periods of higher volatility are associated with several economic crises that hit the emerging markets. Regarding the systematic risk, we find that the beta coefficient is relatively stable at low frequencies, presenting a value of around 1. In contrast, at higher frequencies, the beta coefficient varies considerably, attaining values as high as 3 in some economic episodes. Additionally, we assessed the importance of the systematic risk in explaining total risk in emerging markets. Again, we find noteworthy variation in the results across frequencies and over time. We conclude that the importance of systematic risk in emerging markets is relatively high and stable over time at low frequencies. At higher frequencies, the influence of the systematic part was relatively low before the mid-1990s, but increased gradually thereafter, attaining values also relatively high at the end of the sample. All of these results highlight the importance of considering time and frequency-varying features in risk assessment. Hence, wavelet analysis can be a valuable tool for obtaining additional insights that may influence risk-taking decisions.