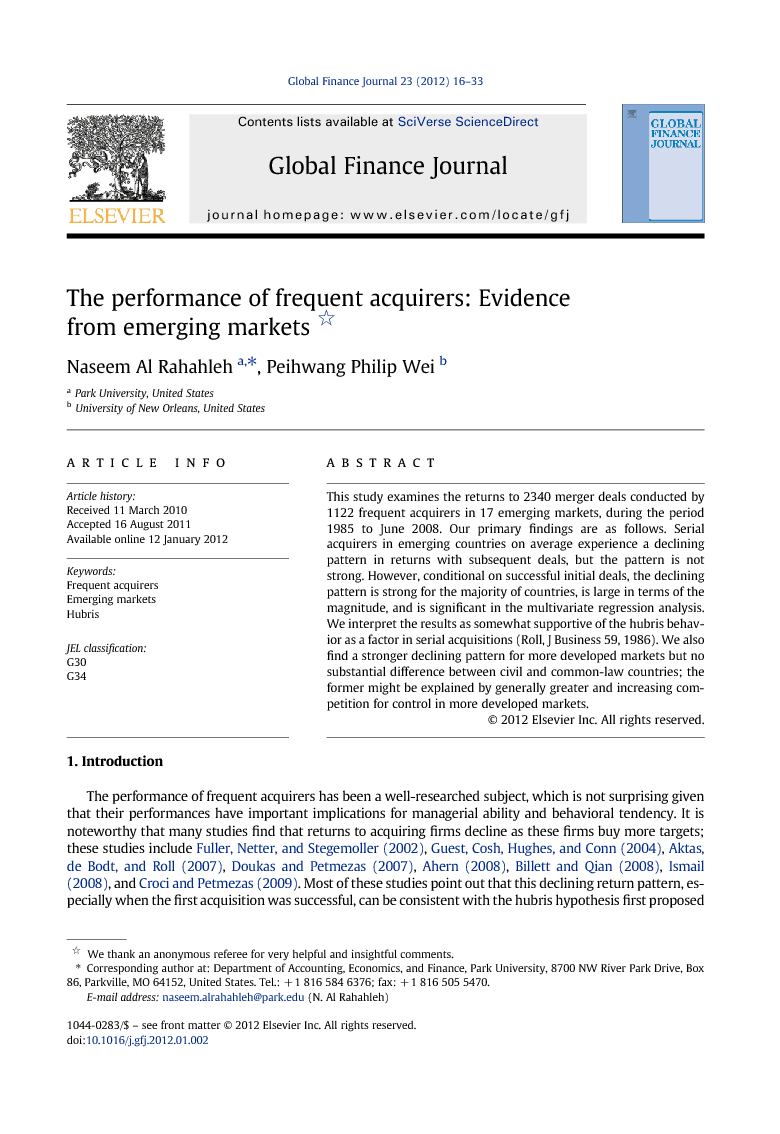 This study examines the returns to 2340 merger deals conducted by 1122 frequent acquirers in 17 emerging markets, during the period 1985 to June 2008. Our primary findings are as follows. Serial acquirers in emerging countries on average experience a declining pattern in returns with subsequent deals, but the pattern is not strong. However, conditional on successful initial deals, the declining pattern is strong for the majority of countries, is large in terms of the magnitude, and is significant in the multivariate regression analysis. We interpret the results as somewhat supportive of the hubris behavior as a factor in serial acquisitions (Roll, J Business 59, 1986). We also find a stronger declining pattern for more developed markets but no substantial difference between civil and common-law countries; the former might be explained by generally greater and increasing competition for control in more developed markets.

In this paper, we examine 2340 merger deals by 1122 frequent acquirers in 17 emerging markets, during the period 1985 to June 2008. In general, serial acquirers in these countries make fewer deals than those in the U.S. and U.K. Acquirers generally experience a declining pattern in returns with subsequent deals, but the evidence is less than overwhelming. In particular, acquirers' returns demonstrate a significant decline from the 1st deal to 2–3 deals in only one country: South Korea, which happens to be the most active country in terms of the number of deals. The declining pattern is stronger for civil-law countries and markets characterized by higher degrees of development. A regression analysis that controls for other factors produces essentially the same results, except that the difference between civil and common-law countries is not strong. We also find a difference between target types: compared to other target types, acquisitions of public targets do not appear to be associated with any systematic patterns in abnormal returns. More striking results are that, conditional on the success of the 1st deal, the declining pattern is stronger for the majority of countries (10), is greater in terms of the magnitude of decline, and is more significant in the multivariate regression analysis, compared to the unconditional analysis. Overall, the evidence is somewhat supportive of the hubris behavior as a factor in serial acquisitions. Not all evidence is supportive of the hubris hypothesis, however. In particular, we find almost no difference in patterns between civil and common-law countries. This is inconsistent with the hubris hypothesis because managers domiciled in civil-law countries arguably are less disciplined and therefore might be more vulnerable to hubris behavior. Moreover, we find that the declining pattern tends to be stronger for markets characterized by greater degrees of development. This is hard to be explained by the hubris hypothesis because managers in more developed markets should be more disciplined and less likely to be infected by over-confidence. To some extent, this result is not surprising because the higher degree of competition in these markets means that hubris-infected managers are less likely to prosper there. Instead, this result might be explained by a generally greater degree of competition for corporate control in more developed markets. Specifically, competition for good targets is stronger and increasing over time in these markets, hence returns are decreasing for frequent acquirers. This interpretation is in agreement with the finding of Alexandridis et al. (2010), who conclude that merger premium is influenced by the degree of competition for corporate control around the world. Additional analyses on merger premium and time-between-acquisitions also produce results that are inconsistent with the hubris hypothesis; however, these additional analyses might suffer from small sample and measurement problems. In conclusion, we find some evidence that hubris behavior and competition affect mergers conducted by frequent acquirers in emerging markets. There is probably no single factor that can completely capture the behavior of frequent acquirers in all emerging markets.