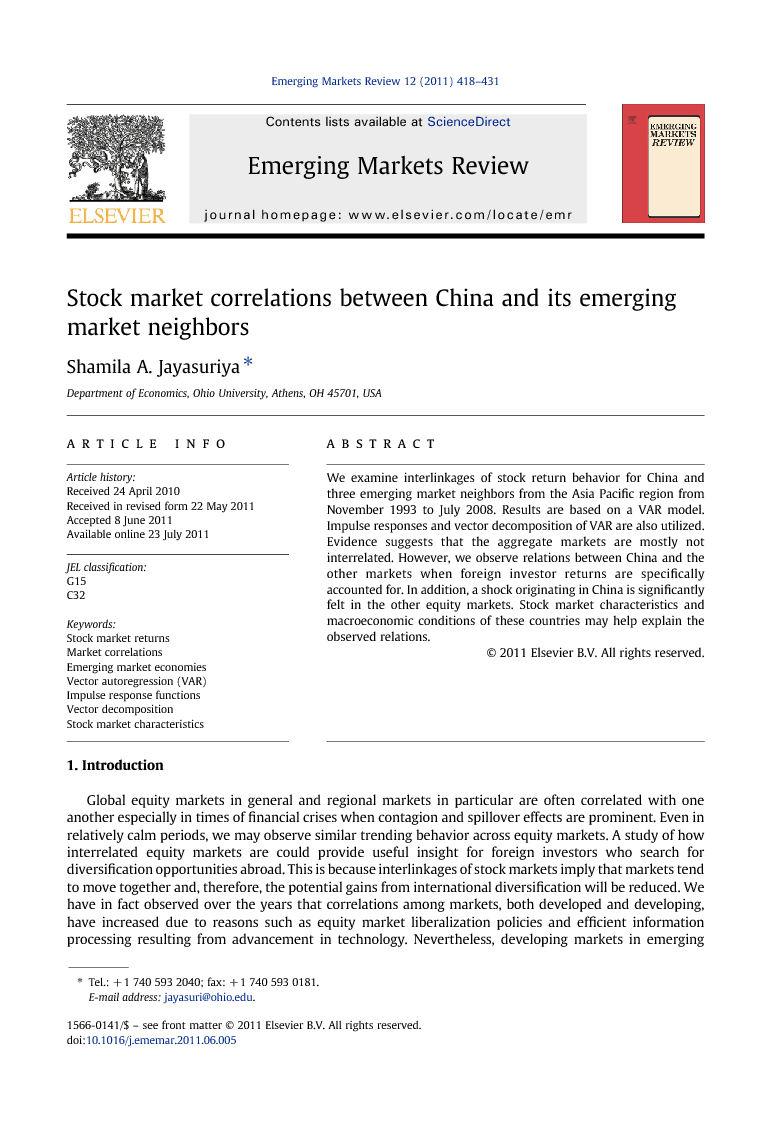 We examine interlinkages of stock return behavior for China and three emerging market neighbors from the Asia Pacific region from November 1993 to July 2008. Results are based on a VAR model. Impulse responses and vector decomposition of VAR are also utilized. Evidence suggests that the aggregate markets are mostly not interrelated. However, we observe relations between China and the other markets when foreign investor returns are specifically accounted for. In addition, a shock originating in China is significantly felt in the other equity markets. Stock market characteristics and macroeconomic conditions of these countries may help explain the observed relations.

Global equity markets in general and regional markets in particular are often correlated with one another especially in times of financial crises when contagion and spillover effects are prominent. Even in relatively calm periods, we may observe similar trending behavior across equity markets. A study of how interrelated equity markets are could provide useful insight for foreign investors who search for diversification opportunities abroad. This is because interlinkages of stock markets imply that markets tend to move together and, therefore, the potential gains from international diversification will be reduced. We have in fact observed over the years that correlations among markets, both developed and developing, have increased due to reasons such as equity market liberalization policies and efficient information processing resulting from advancement in technology. Nevertheless, developing markets in emerging economies with relatively high and stable growth rates such as those in the East Asia and Pacific region are often good choices for market participants looking to diversify their portfolios internationally. This paper examines the interlinkages of stock return behavior for China and three of its emerging market neighbors in the East Asia and Pacific region including Thailand, Indonesia and Philippines. We focus on China because it is one of the fastest growing economies of the world today with an annual growth rate of about 9 percent reported in 2008.1 This is a remarkable growth rate by any standard and one that far exceeds the economic growth rates reported for many of China's neighbors. The World Bank categorizes China as a lower middle-income country in the East Asia and Pacific region. Among thirteen other countries, Thailand, Indonesia and Philippines are also categorized in the same income group as China.2 The similar level of income is in fact the underlying basis for selecting this group of countries as income is likely to be a key factor that determines investor participation in stock markets. In addition, the online World Trade Organization (WTO) data shows that China is an important trade partner for each of the three neighbor markets that we have selected. For example, China is among the top 5 export destinations for all three and China is also among the top 5 import origins for all except Philippines. Maintaining strong trade relations with China also adds to our basis for selecting these neighbor markets. Fig. 1 plots the annual growth rates for the four countries and highlights the impressive growth that has occurred in China in the recent years. Interestingly, the growth rates appear to be closely related for Thailand, Indonesia and Philippines especially in the aftermath of the Asian currency crisis of July 1997. China remains isolated from its counterparts even in the midst of the crisis. This observation in fact motivates us to investigate the equity market correlations for the four countries. Equity market behavior often reflects the real economic conditions of an economy, and the evidently close correlations of economic growth rates observed for some of the countries of the sample leads us to suspect that there may be close relations among the equity markets as well. Furthermore, given the economic strength of China relative to the other countries of the group, we expect the Chinese equity market to be relatively more dominant and influence the other markets of the group. Full-size image (30 K) Fig. 1. GDP growth rate (annual%) from 1990 to 2008. Source: World Development Indicators (WDI) online database. Figure options A key research question that we ask in our paper is whether stock return behavior in one market affects the behavior of another after controlling for a host of factors. We initiate the analysis by plotting the dollar denominated aggregate stock prices for the four markets in Fig. 2. As can be seen, the stock price index for China is above the regional average and it far exceeds the individual indices for the other three markets especially in the most recent past. Excluding China, we observe significant correlations in the stock prices for the remaining countries of the sample. Full-size image (63 K) Fig. 2. Closing stock price index data in U.S. dollars from October 1993 to July 2008 (Base year = October 1995). Source: The stock price index data for the four countries are obtained from the S&P/IFC Global Index database. Figure options The focus of this paper, however, is on stock return behavior that is of primary interest to portfolio investors. Subsequently, we implement a vector autoregression (VAR) analysis on the stock market returns to formally examine these relations. We also use an impulse response function and vector decomposition analysis to examine the impact of shocks originating in these markets. We identify significant relations between China and the other markets when foreign investor returns are specifically accounted for. In addition, a shock originating in the Chinese equity market is immediately felt in the other markets but mostly not the other way around. Much of the variation in returns is in fact due to shocks coming from either China or Thailand. Explanations for these findings can be found in stock market characteristics such as the size and liquidity of markets, and macroeconomic conditions such as the economic growth rates and political risk of the economies. The remainder of the paper is organized as follows. Section 2 provides a brief literature review of related work. Section 3 discusses the methodology. Section 4 describes the data and presents some preliminary statistics. Section 5 documents the estimation results. Lastly, Section 6 concludes.

The main objective of our paper was to identify interlinkages of stock return behavior between China and three of its emerging market neighbors in the East Asia and Pacific region including Thailand, Indonesia and Philippines. The study was conducted using the S&P/IFC global and investable index data for the period from November 1993 to July 2008. A vector autoregression (VAR) model was estimated to formally examine the correlations among the markets. Our findings revealed that stock return behavior using global index data was mostly independent of each other for the four markets. However, we found evidence that the market returns based on subsets of securities available to foreign investors are interrelated for certain markets. For example, when foreign investor participation was specifically accounted for, we discovered a significant interlinkage between the equity markets of China and Thailand. Also, our results revealed that the stock market behavior of China had a notable impact on the return behavior of the other markets. The impulse response function and vector decomposition analysis both highlighted the dominant role of China in terms of transmitting shocks to the other markets. We attempted to explain our findings by examining data for stock market characteristics and macroeconomic fundamentals for these economies. First, apparent similarities in stock market characteristics (such as market capitalization, liquidity and future growth prospects of the listed companies) and similarities in macroeconomic conditions (such as economic growth, interest rates, and political and other forms of risk) provided some support for our VAR findings on market correlations. Second, the clear dominance of China especially in terms of stock market capitalization, liquidity and economic growth helped explain the significant impact that China has on the other markets of the sample. We also put forward the idea that the interrelations observed can generally be understood by the potential interlinkages in foreign investor behavior. We suggested that the investable returns studied in this paper are likely to be driven by the behavior of a common group of foreign investors, possibly U.S. investors, who look to diversify their portfolios in emerging markets. Internal factors such as stagnant economic growth and decreasing private domestic investment, for example, would negatively affect the U.S. market returns and prompt U.S. investors to search for better opportunities in foreign equity markets. External factors will play a key role in identifying foreign markets that can potentially generate high returns for investors. Emerging stock markets in the Asia Pacific region, despite the increased market correlations observed over time, have continued to be good choices in this regard given their relatively stable macroeconomic conditions and better market fundamentals. Data for stock market characteristics presented by Jayasuriya (2005) in fact shows that the Asia Pacific emerging markets generally lead the other emerging markets of the world with respect to characteristics such as market transparency, accounting standards, investor protection, and market exit restrictions pertaining to the repatriation of foreign income and capital. In addition, the quality of institutions for variables such as the risk of repudiation of contracts by the government and the risk of expropriation, on average, are reported to be higher for Asia Pacific markets.16 Therefore, foreign investor interest is expected to be relatively high for these markets as the investment environment is often quite favorable for foreign participants. If a common group of investors trade substantial amounts of money in two or more markets, their actions may lead to strong market correlations if investors engage in similar trade behavior. For example, trade decisions to buy or sell certain stock may often be synchronized for a common set of investors and their coordinated actions may even be intensified during global or regional shocks because of investor herd behavior. This intuition provides the basis for our idea that the behavior of a common group of investors may be an underlying factor for interlinkages identified in foreign equity markets where these investors actively engage in trading shares. For the four countries studied in this paper, data from the U.S. Treasury Bulletin revealed that U.S. investors are far more inclined to trade in the equity markets of China and Thailand than those in Indonesia and Philippines possibly because of relatively better macroeconomic and stock market fundamentals that are in place. And the significant VAR interlinkages that we identified between China and Thailand may indeed be a direct result of the trading behavior of a subset of U.S. investors participating in these two markets. More generally, the results of our paper suggest that a common group of investors actively trading in international equity markets may be a likely determinant that contributes to financial integration across markets. In an era of increased globalization that spans increased economic and financial integration across borders, this is yet another factor that adds to financial integration and one that would surely limit the potential to reap international portfolio diversification benefits in foreign equity markets.