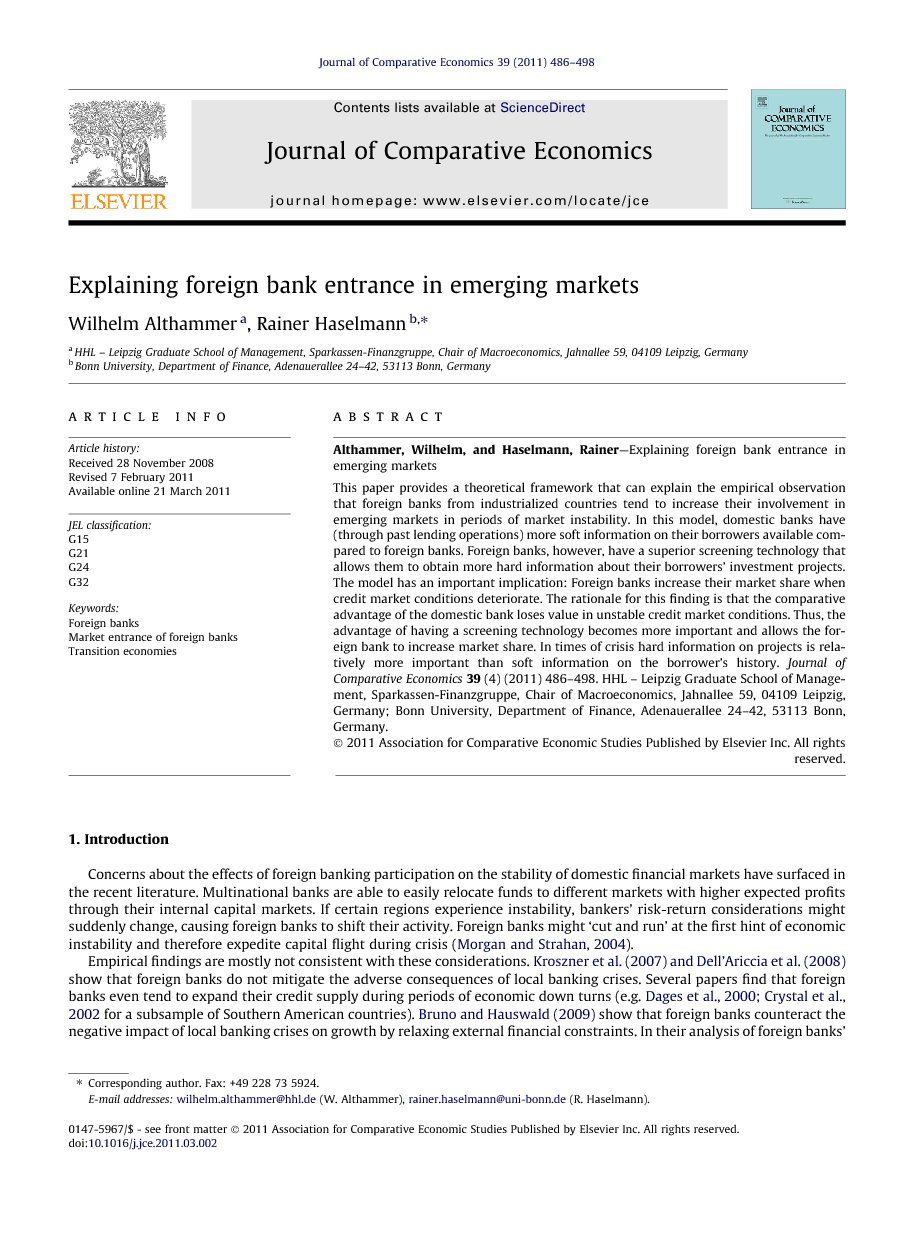 This paper provides a theoretical framework that can explain the empirical observation that foreign banks from industrialized countries tend to increase their involvement in emerging markets in periods of market instability. In this model, domestic banks have (through past lending operations) more soft information on their borrowers available compared to foreign banks. Foreign banks, however, have a superior screening technology that allows them to obtain more hard information about their borrowers’ investment projects. The model has an important implication: Foreign banks increase their market share when credit market conditions deteriorate. The rationale for this finding is that the comparative advantage of the domestic bank loses value in unstable credit market conditions. Thus, the advantage of having a screening technology becomes more important and allows the foreign bank to increase market share. In times of crisis hard information on projects is relatively more important than soft information on the borrower’s history.

Concerns about the effects of foreign banking participation on the stability of domestic financial markets have surfaced in the recent literature. Multinational banks are able to easily relocate funds to different markets with higher expected profits through their internal capital markets. If certain regions experience instability, bankers’ risk-return considerations might suddenly change, causing foreign banks to shift their activity. Foreign banks might ‘cut and run’ at the first hint of economic instability and therefore expedite capital flight during crisis (Morgan and Strahan, 2004). Empirical findings are mostly not consistent with these considerations. Kroszner et al., 2007 and Dell’Ariccia et al., 2008 show that foreign banks do not mitigate the adverse consequences of local banking crises. Several papers find that foreign banks even tend to expand their credit supply during periods of economic down turns (e.g. Dages et al., 2000 and Crystal et al., 2002 for a subsample of Southern American countries). Bruno and Hauswald (2009) show that foreign banks counteract the negative impact of local banking crises on growth by relaxing external financial constraints. In their analysis of foreign banks’ behavior in CEE transition economies, de Haas and van Lelyveld, 2004 and Kraft, 2002 find that foreign banks consider problematic economic conditions as an opportunity to expand either through new acquisitions or by extending existing credit lines. Based on firm level data, Giannetti and Ongena (2010) document that foreign banks that acquire domestic banks with a high proportion of non-performing loans, appear less likely to drop their clients in contrast to domestic banks. How can this behavior of foreign banks be explained theoretically? Why do foreign banks tend to extend and not reduce their lending in emerging markets experiencing banking crises? Why do multinational banks not reallocate their funds through internal capital markets to regions with less economic volatility? The aim of this paper is to provide a theoretical framework for such outcomes.1 One major difference between foreign and domestic banks in emerging markets is the information set used to make lending decisions. In general, domestic banks have more soft information about their borrowers, since they have knowledge about their ability and their local environment from past lending operations. Such an information advantage of domestic banks over their foreign competitors has been widely documented in the literature (see Mian, 2006, Khanna and Palepu, 2000 and Buch, 2003). In contrast, foreign banks may have better screening and/or monitoring technology available that allows them to collect hard information on their borrowers’ investment projects.2 Our model uses these differences in information structure to establish the following result: In equilibrium, foreign banks take market shares from their domestic counterparts if economic conditions deteriorate. The intuition underlying this finding is that during periods of economic instability, the availability of hard information on current investment projects becomes relatively more important than soft information on the borrower’s financial history. Therefore, adverse economic conditions allow foreign banks to capitalize their technological advantage over domestic banks. Foreign banks become relatively more profitable and, thus, increase their market share. Since no comprehensive theory of foreign banking exists, our findings add to the current literature. The model provides an explanation for the frequency of foreign market entrants, even though foreign banks have an information disadvantage and domestic economic conditions are unstable. Specifically, it also helps to explain the high market share of foreign banks in Eastern European transition countries. The paper is structured as follows. In Section 2 we derive our model and its implications. Subsequently, model implications are discussed in Section 3. Finally, conclusions are provided in Section 4.

We model the entrance of foreign banks in emerging markets. In our model, domestic banks obtain more soft information on borrowers through past lending operations. Foreign banks have a better banking technology at their disposal that allows them to screen investment projects and obtain hard information on their borrowers. Equilibrium market shares of both types of banks depend on the prevailing credit market conditions. Our model yields an important result. Foreign banks gain relative market shares if the credit market conditions are unfavorable (i.e. the payoff and success probability of investment projects is low). This finding can be explained by the relative importance of the ability to access hard information on borrowers. If foreign banks have a technological advantage over their domestic counterparts, they will gain market under distressed credit market conditions, not under prosperous one. These theoretical findings provide an explanation for the empirical observation that foreign banks tend to increase their market presence under volatile economic conditions (e.g. Dages et al., 2000, Crystal et al., 2002, Peek and Rosengren, 2000, Goldberg, 2001 and de Haas and van Lelyveld, 2004). As an example we report some statistics from the CEE markets. Even though credit market conditions were highly unstable and characterized by periods of bank restructuring and deep recessions, foreign banks gained extremely high markets shares from their domestic competitors.