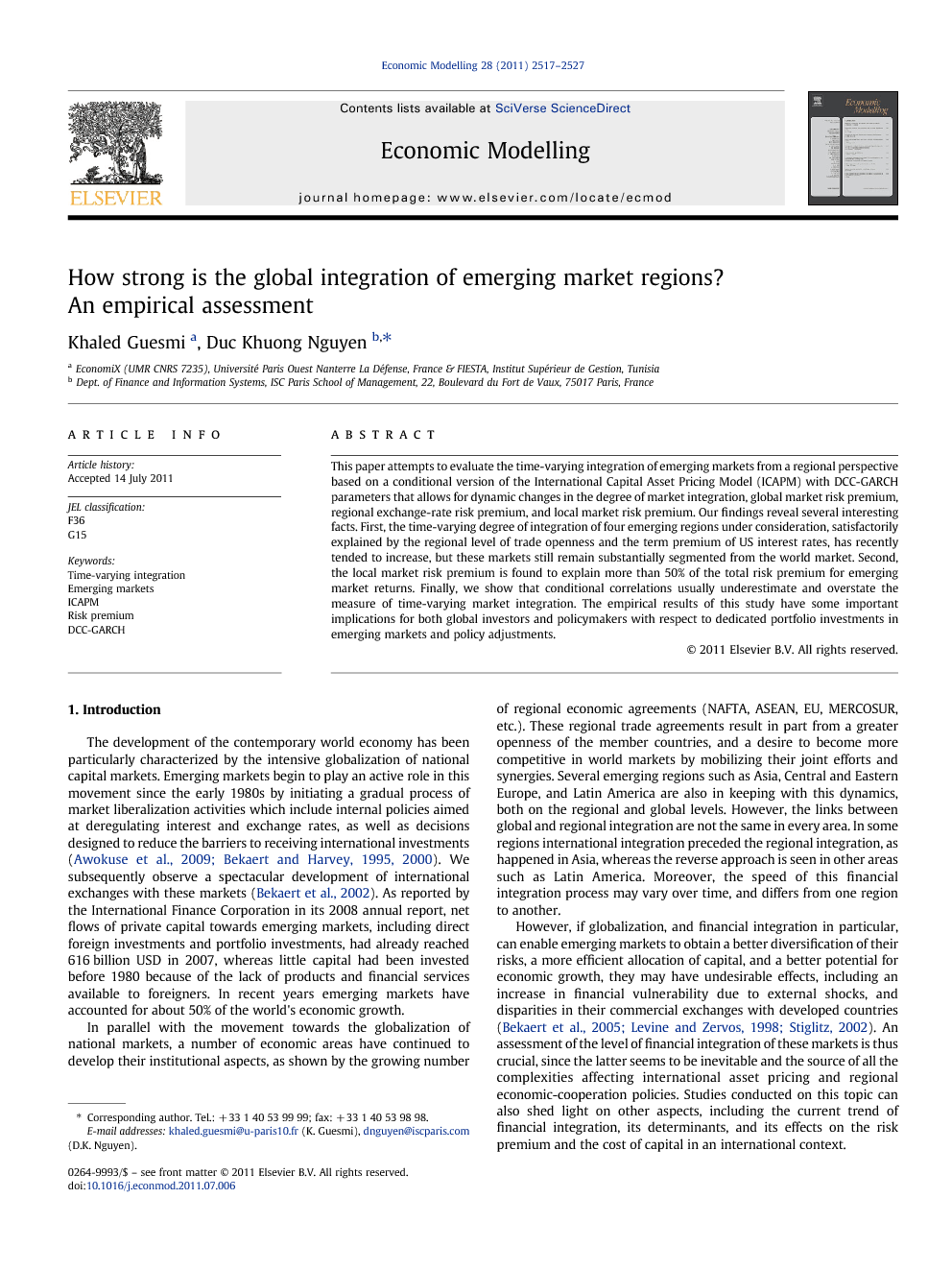 This paper attempts to evaluate the time-varying integration of emerging markets from a regional perspective based on a conditional version of the International Capital Asset Pricing Model (ICAPM) with DCC-GARCH parameters that allows for dynamic changes in the degree of market integration, global market risk premium, regional exchange-rate risk premium, and local market risk premium. Our findings reveal several interesting facts. First, the time-varying degree of integration of four emerging regions under consideration, satisfactorily explained by the regional level of trade openness and the term premium of US interest rates, has recently tended to increase, but these markets still remain substantially segmented from the world market. Second, the local market risk premium is found to explain more than 50% of the total risk premium for emerging market returns. Finally, we show that conditional correlations usually underestimate and overstate the measure of time-varying market integration. The empirical results of this study have some important implications for both global investors and policymakers with respect to dedicated portfolio investments in emerging markets and policy adjustments.

The development of the contemporary world economy has been particularly characterized by the intensive globalization of national capital markets. Emerging markets begin to play an active role in this movement since the early 1980s by initiating a gradual process of market liberalization activities which include internal policies aimed at deregulating interest and exchange rates, as well as decisions designed to reduce the barriers to receiving international investments (Awokuse et al., 2009, Bekaert and Harvey, 1995 and Bekaert and Harvey, 2000). We subsequently observe a spectacular development of international exchanges with these markets (Bekaert et al., 2002). As reported by the International Finance Corporation in its 2008 annual report, net flows of private capital towards emerging markets, including direct foreign investments and portfolio investments, had already reached 616 billion USD in 2007, whereas little capital had been invested before 1980 because of the lack of products and financial services available to foreigners. In recent years emerging markets have accounted for about 50% of the world's economic growth. In parallel with the movement towards the globalization of national markets, a number of economic areas have continued to develop their institutional aspects, as shown by the growing number of regional economic agreements (NAFTA, ASEAN, EU, MERCOSUR, etc.). These regional trade agreements result in part from a greater openness of the member countries, and a desire to become more competitive in world markets by mobilizing their joint efforts and synergies. Several emerging regions such as Asia, Central and Eastern Europe, and Latin America are also in keeping with this dynamics, both on the regional and global levels. However, the links between global and regional integration are not the same in every area. In some regions international integration preceded the regional integration, as happened in Asia, whereas the reverse approach is seen in other areas such as Latin America. Moreover, the speed of this financial integration process may vary over time, and differs from one region to another. However, if globalization, and financial integration in particular, can enable emerging markets to obtain a better diversification of their risks, a more efficient allocation of capital, and a better potential for economic growth, they may have undesirable effects, including an increase in financial vulnerability due to external shocks, and disparities in their commercial exchanges with developed countries (Bekaert et al., 2005, Levine and Zervos, 1998 and Stiglitz, 2002). An assessment of the level of financial integration of these markets is thus crucial, since the latter seems to be inevitable and the source of all the complexities affecting international asset pricing and regional economic-cooperation policies. Studies conducted on this topic can also shed light on other aspects, including the current trend of financial integration, its determinants, and its effects on the risk premium and the cost of capital in an international context. Although previous studies have provided a general understanding of the global integration process of individual emerging markets over the recent decades (Bekaert and Harvey, 1995, Carrieri et al., 2007, Errunza and Losq, 1985 and Pukthuanthong and Roll, 2009), little attention has been paid to the dynamics of the integration of emerging market regions into the world market, which has now become an undeniable trend. Moreover, the potential time-varying shifts in the integration process that governs stock-market return dynamics, resulting from the structural reforms undertaken by emerging countries, have rarely been considered. This then leads to a biased assessment of the degree of financial integration. This study contributes to the existing literature by developing a dynamic international capital asset pricing model (ICAPM) allowing for smooth transition between different integration regimes. Specifically, expected returns may move from a perfectly-segmented regime to a perfectly-integrated one, or vice versa, depending on a certain number of national and international factors that are likely to drive the process of financial integration. Although the proposed model was developed in the spirit of that presented by Bekaert and Harvey (1995), it allows for the dynamic conditional correlations between stock returns by using the multivariate DCC-GARCH model of Engle (2002). It also enables an examination of the relevance of the dynamic measure of financial integration over the conditional correlations, very frequently used in the literature when referring to the level of integration. Lastly, our study differs from past studies in that we investigate the integration of emerging market regions into the world market, rather than individual emerging markets, using actual real exchange rates as a common source of risk, in addition to world and domestic sources of risk. Our results show that the integration degree in four emerging market regions (Latin America, Asia, Southeastern Europe, and the Middle East) varied widely through time over the period 1996–2008, and this can be satisfactorily explained by the level of trade openness and variations in the US term premium. Although the general trend is towards increasing financial integration, emerging market areas seem to be still significantly segmented from the global market. A breakdown of the total risk premium confirms this finding, in that it underlines the dominant role of the local risk factor in explaining variations in the expected returns for the four areas studied. Finally, a close inspection of the conditional correlations indicates that they constitute a biased indicator of financial integration. The remainder of the article is organized as follows. Section 2 presents a brief review of the literature on financial integration in emerging markets. Section 3 describes the empirical approach which we employ to measure and investigate the level of emerging market integration over time. Section 4 presents and discusses the results obtained. Section 5 provides some concluding remarks.

The purpose of this paper is to study the dynamics of the global integration process of four emerging market regions into the world market, while taking into account the importance of exchange rate and local market risk. An international capital asset pricing model suitable for partially integrated markets and departure from purchasing power parity was developed in the spirit of Bekaert and Harvey (1995)'s regime-switching model in order to explain the time-variations in expected returns on regional emerging market indices. In its fully functional form, the model allows the market integration measure as well as the global and local risk premiums to vary through time. We mainly find that the level of market integration varies widely over time and is satisfactorily explained by the degree of trade openness and variation in the US term premium. Even though it reaches fairly high values during several periods, and exhibit an upward trend towards the end of the estimation period, the emerging market regions under consideration still remain segmented from the world market. These results thus suggest that diversification into emerging market assets continue to produce substantial profits and that the asset pricing rules should reflect a state of partial integration. Our investigation, which addresses the evolution and formation of total risk premiums, confirm this empirically.