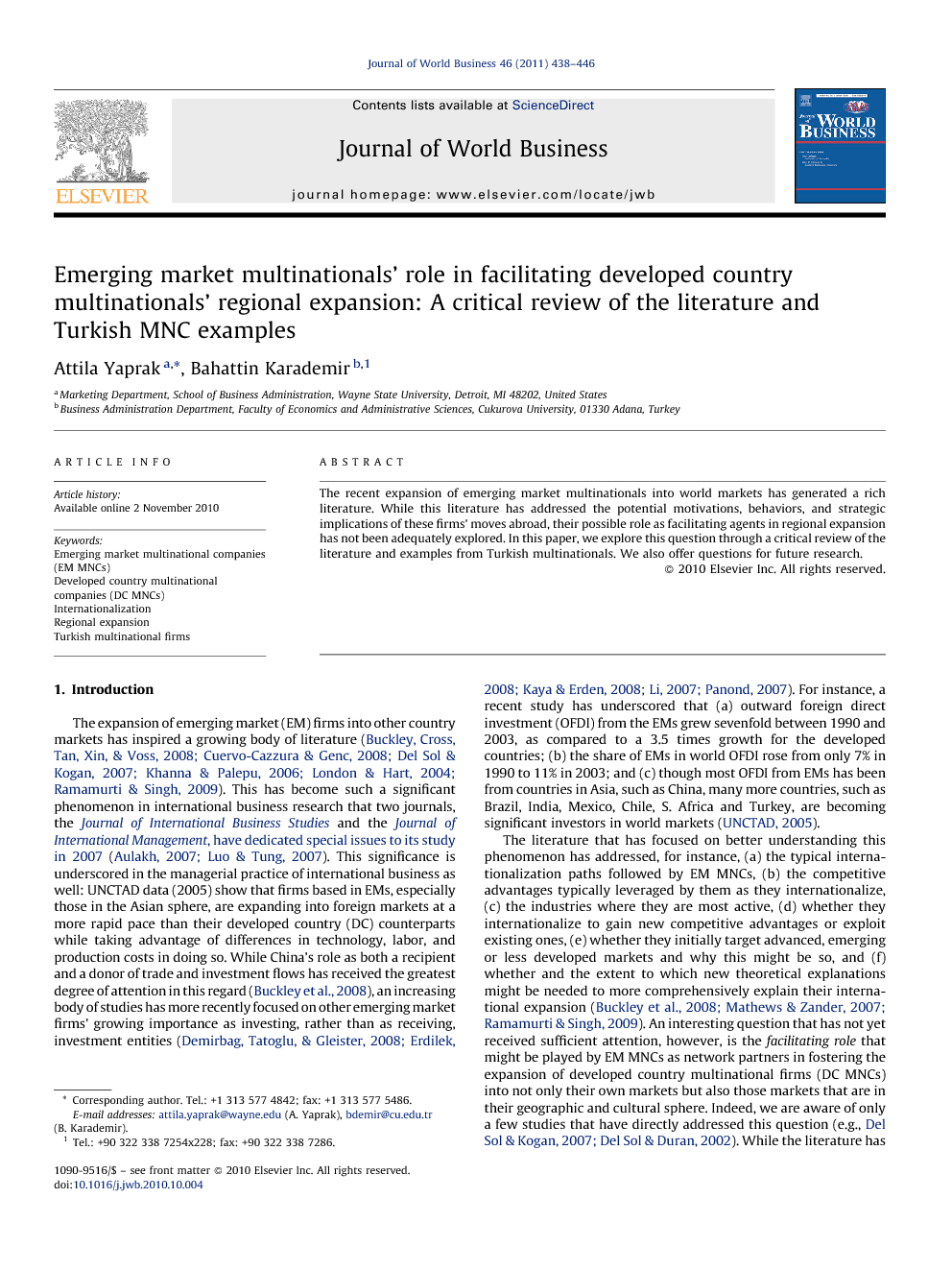 The recent expansion of emerging market multinationals into world markets has generated a rich literature. While this literature has addressed the potential motivations, behaviors, and strategic implications of these firms’ moves abroad, their possible role as facilitating agents in regional expansion has not been adequately explored. In this paper, we explore this question through a critical review of the literature and examples from Turkish multinationals. We also offer questions for future research.

The expansion of emerging market (EM) firms into other country markets has inspired a growing body of literature (Buckley et al., 2008, Cuervo-Cazzura and Genc, 2008, Del Sol and Kogan, 2007, Khanna and Palepu, 2006, London and Hart, 2004 and Ramamurti and Singh, 2009). This has become such a significant phenomenon in international business research that two journals, the Journal of International Business Studies and the Journal of International Management, have dedicated special issues to its study in 2007 (Aulakh, 2007 and Luo and Tung, 2007). This significance is underscored in the managerial practice of international business as well: UNCTAD data (2005) show that firms based in EMs, especially those in the Asian sphere, are expanding into foreign markets at a more rapid pace than their developed country (DC) counterparts while taking advantage of differences in technology, labor, and production costs in doing so. While China's role as both a recipient and a donor of trade and investment flows has received the greatest degree of attention in this regard (Buckley et al., 2008), an increasing body of studies has more recently focused on other emerging market firms’ growing importance as investing, rather than as receiving, investment entities (Demirbag et al., 2008, Erdilek, 2008, Kaya and Erden, 2008, Li, 2007 and Panond, 2007). For instance, a recent study has underscored that (a) outward foreign direct investment (OFDI) from the EMs grew sevenfold between 1990 and 2003, as compared to a 3.5 times growth for the developed countries; (b) the share of EMs in world OFDI rose from only 7% in 1990 to 11% in 2003; and (c) though most OFDI from EMs has been from countries in Asia, such as China, many more countries, such as Brazil, India, Mexico, Chile, S. Africa and Turkey, are becoming significant investors in world markets (UNCTAD, 2005). The literature that has focused on better understanding this phenomenon has addressed, for instance, (a) the typical internationalization paths followed by EM MNCs, (b) the competitive advantages typically leveraged by them as they internationalize, (c) the industries where they are most active, (d) whether they internationalize to gain new competitive advantages or exploit existing ones, (e) whether they initially target advanced, emerging or less developed markets and why this might be so, and (f) whether and the extent to which new theoretical explanations might be needed to more comprehensively explain their international expansion (Buckley et al., 2008, Mathews and Zander, 2007 and Ramamurti and Singh, 2009). An interesting question that has not yet received sufficient attention, however, is the facilitating role that might be played by EM MNCs as network partners in fostering the expansion of developed country multinational firms (DC MNCs) into not only their own markets but also those markets that are in their geographic and cultural sphere. Indeed, we are aware of only a few studies that have directly addressed this question (e.g., Del Sol and Kogan, 2007 and Del Sol and Duran, 2002). While the literature has theorized about the significance of this capability, it has remained scant in studies that synthesize conceptually or examine empirically this dimension of the internationalization of the EM MNC phenomenon. This is despite Rugman and Verbeke, 2004 and Rugman and Verbeke, 2008 that most MNCs pursue regional, rather than global strategies. They argue that it is difficult for firms to transfer their effective regional firm specific advantages (FSAs) into global FSAs. In this paper, we aim to contribute to this stream of literature by critically reviewing the literature on the expansion of EM MNCs, commenting on that literature, and suggesting avenues for future research. Our primary thesis is that EM MNCs, in their roles as alliance partners, can function as facilitators for DC MNCs’ entry into markets that are in their geographic and cultural sphere, as well as, if not better than their previous roles in serving as partners when DC MNCs entered their home markets. We use examples from Turkish MNCs’ roles in helping foster the entry of DC MNCs’ entry into the Middle Eastern, North African, and Asian markets to underscore our thesis. Coca Cola's recent entry into the Iraqi, Syrian, and the Jordanian markets was facilitated, for example, through its earlier-established partnership with the Anadolu Group, its network partner in both Turkey and the Turkic Soviet republics. Coca Cola chose to enter these markets through an affiliation with the Anadolu Group, rather than entering them independently or in collaboration solely with a local partner in each of these countries. As an another example, Alliance Boots’ entry into the Egyptian, Algerian, and Russian markets was facilitated through its partnership with the Hedef Alliance, a network partner of Alliance Boots in Turkey. Alliance Boots chose to establish its pharmaceutical and toiletry distribution channels in the Egyptian and Algerian markets through an affiliation with Hedef Alliance rather than establishing them independently or in partnership solely with local partners. Our paper is organized as follows. After presenting the relevant strands from the extant literature on EM MNCs, we comment on the merits of the themes explored in each of those strands. In this context, we explore (1) the adequacy of extant internationalization theory in explaining EM MNCs’ internationalization; (2) the unique advantages that might enhance EM MNCs’ roles in facilitating DC MNCs’ expansion into neighboring markets; and (3) the strategies that are typically followed by EM MNCs to serve in these facilitating roles. We then discuss Turkish MNCs’ role in this context through examples that underscore our primary thesis. We conclude with suggestions for future research.

International expansion of EM MNCs has inspired a growing body of literature in international business recently (Luo and Tung, 2007 and Ramamurti, 2004). This literature has focused attention on the potential motivations behind EM MNCs’ internationalization behavior, strategic typologies that might be used by internationalizing EM MNCs, the possible sources of firm-specific and context-specific advantages that they might possess over DC MNCs as they internationalize, and the unique challenges they face when they internationalize when compared to their DC counterparts. Mostly exploratory and conceptual, this research raised questions about the adequacy of extant internationalization theory in describing and/or explaining EM MNC behavior and whether newer explanations or adjustments to extant theory might be needed (Buckley et al., 2008 and Ramamurti and Singh, 2009). An interesting question about EM MNC behavior that has not yet been adequately addressed in the literature concerns the facilitating role that EM MNCs might be able to play in helping DC MNCs internationalize in the EM MNCs’ neighborhood. Given their unique experiences while developing through economically difficult conditions in the latter half of the last century, these enterprises have typically accumulated unique assets, skills and capabilities that their DC counterparts are unlikely to possess and exploit as effectively. Thus, it is reasonable to theorize that EM MNCs can bring a variety of facilitating assets to an expansion effort of a DC MNC in an area, typically a region, which is in the DC MNC's geographic and cultural sphere. In this paper, we attempted to contribute to filling this void with a critical review of the current literature in this area. We first addressed the question about extant internationalization theory's adequacy in explaining EM MNC behavior and concluded after discussion that we need at least adjustments to that theory. We also argued that work in this dimension should address how unique FSAs and CSAs might be blended to arrive at a better explanation of EM MNCs’ internationalization. We then asked a question about the extent to which some FSAs or CSAs might play more powerful roles in influencing the internationalization processes of EM MNCs. We concluded that some of these, such as earlier experience with economic liberalization and network embeddedness might be important ingredients in this dimension. We also asked whether the internationalization strategies that EM MNCs typically follow can enhance their facilitating role in aiding DC MNCs to also internationalize. Our review of the current literature indicated that this is likely. We illustrated this likelihood with examples that show the facilitating role played by Turkish MNCs in helping DC MNCs expand into Turkey's neighboring markets. These examples vividly show that some, though not all, of the strategies suggested by Luo and Tung (2007) and Ramamurti and Singh (2009) were followed by internationalizing Turkish MNCs as they facilitated their DC MNC partners’ entry into markets in which they had accumulated assets, skills and capabilities. The following are questions we would like to forward to the literature for further study. First, can EM MNCs expand their facilitating roles in helping their DC MNC partners expand to areas other than their neighborhood? It is possible that EM MNCs may possess learning skills that are not as developed in their DC MNC counterparts that might allow a continuing fostering effort by an EM MNC. Second, it is possible that certain types of EM MNCs, classified under both Luo and Tung's (2007) or Ramamurti and Singh's (2009) typology or in some other manner might fit better with the different strategy types that are typically followed by EM MNCs. Thus, studies might focus on what these combinations might be and what derivative arrangements we might derive as well as the deciding criteria that might be used in determining these winning combinations. Third, new research might focus on the challenges that DC MNCs might face as they try to embed themselves into EM MNCs’ business networks and how these might be overcome to make the network more productive. Fourth, new research might also explore what the ingredients that would foster this embeddedness might be so that the EM MNCs’ facilitating role might be enhanced? For instance, what are the roles that trust, opportunism, reciprocity, communication, and forbearance might play in making this possible? Is current theory, such as the resource based view, social exchange theory or agency theory adequate in explaining these roles? If not, how can each of these be revised to provide a better explanation? Finally, new research should examine what the individual and joint performance implications of these embedded partnerships might be for both the DC and the EM MNCs. For instance, how these might be enhanced and whether some outcomes of embeddedness into EM MNC networks are more conducive to higher performance outcomes than others might be interesting questions to explore.