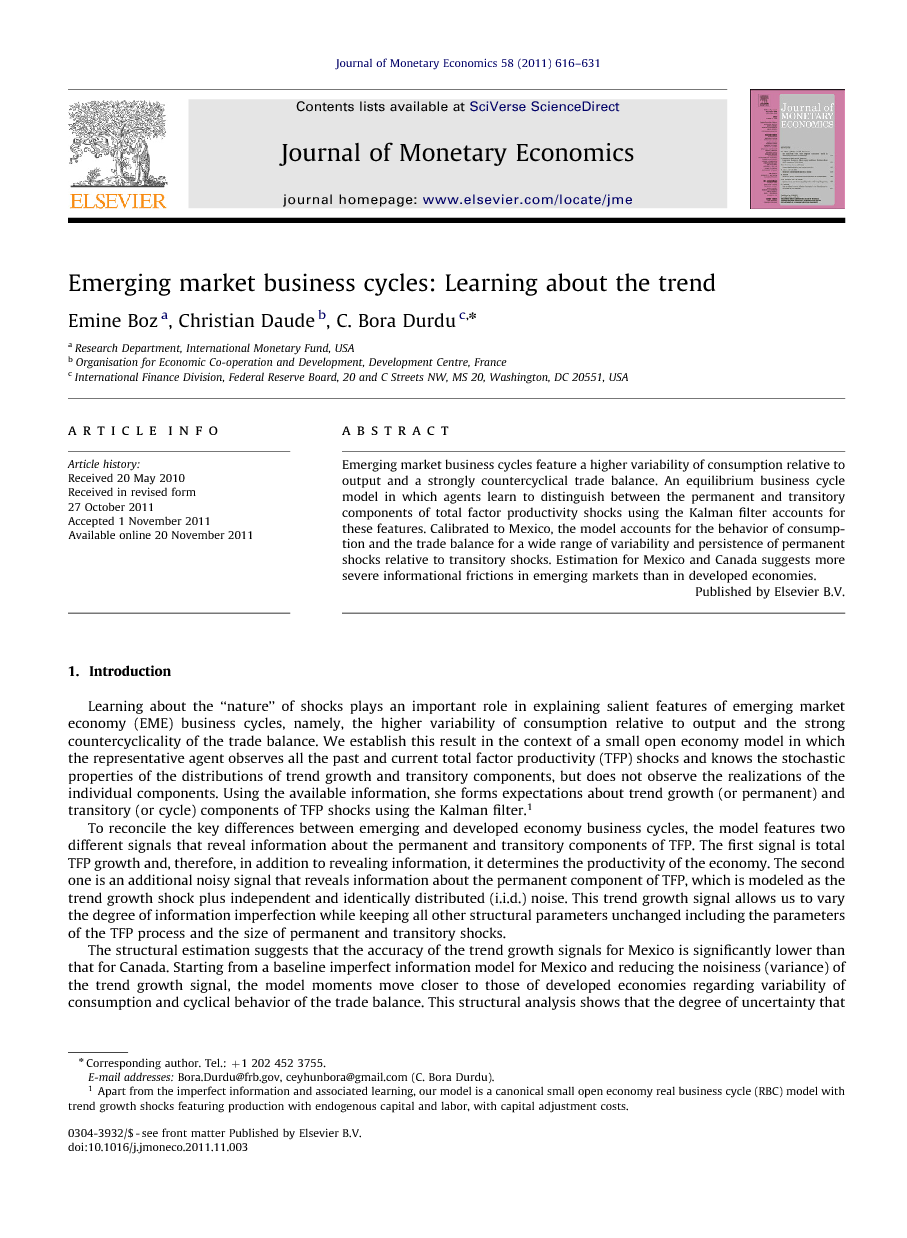 Emerging market business cycles feature a higher variability of consumption relative to output and a strongly countercyclical trade balance. An equilibrium business cycle model in which agents learn to distinguish between the permanent and transitory components of total factor productivity shocks using the Kalman filter accounts for these features. Calibrated to Mexico, the model accounts for the behavior of consumption and the trade balance for a wide range of variability and persistence of permanent shocks relative to transitory shocks. Estimation for Mexico and Canada suggests more severe informational frictions in emerging markets than in developed economies.

When the agents are imperfectly informed about the trend-cycle decomposition of productivity shocks, and they solve a learning problem using the Kalman filter to estimate the components of the TFP, an RBC model of a SOE's performance in matching the emerging market business cycles improves greatly. The key ingredients for these results are the existence of trend shocks, the existence of transitory but persistent cycle shocks, and uncertainty regarding the decomposition of TFP into its components. Our analysis contributes to the emerging market business cycles literature, which has largely emphasized the role of financial frictions, terms of trade shocks, and trend shocks but overlooked the role of uncertainty and informational frictions. The role of uncertainty that the agents face while formulating their expectations about the persistence of changes in economy-wide TFP appears to contribute significantly to the emerging market business cycles. By introducing imperfect information and learning about the underlying fundamentals of the economy in a tractable manner, we open up a new line of research. For example, studying optimal policy (fiscal or monetary) in an environment where the agents learn about permanent and transitory shocks to economic fundamentals can deliver interesting insights. An application of the framework could be on uncertainty about the shocks to the commodity prices. Another useful application could be to build the signal extraction problem developed in this paper into a two-country environment allowing different levels of informational frictions across the two economies to explore cross-country portfolio allocations, consumption correlations, and other relevant issues.