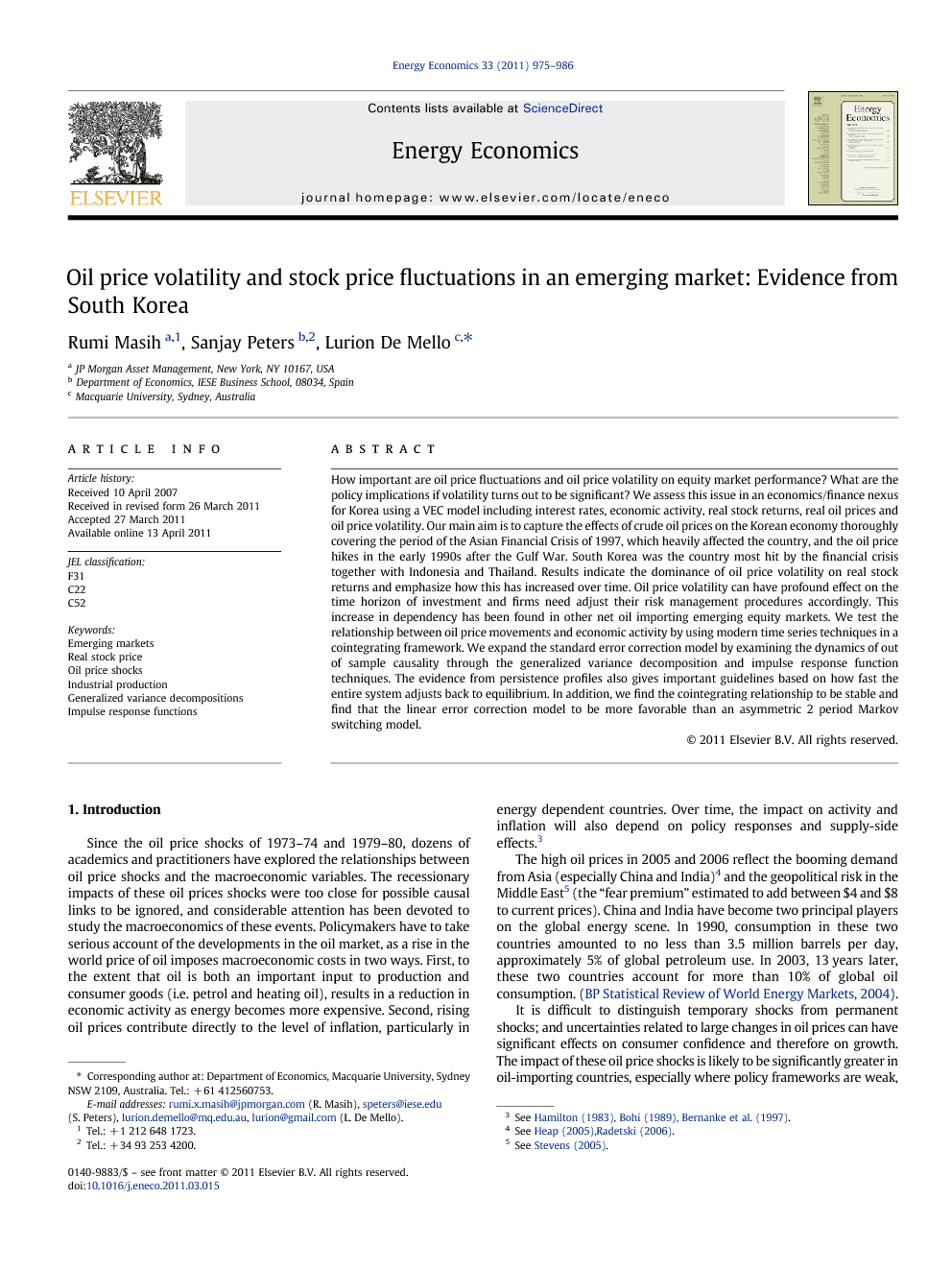 How important are oil price fluctuations and oil price volatility on equity market performance? What are the policy implications if volatility turns out to be significant? We assess this issue in an economics/finance nexus for Korea using a VEC model including interest rates, economic activity, real stock returns, real oil prices and oil price volatility. Our main aim is to capture the effects of crude oil prices on the Korean economy thoroughly covering the period of the Asian Financial Crisis of 1997, which heavily affected the country, and the oil price hikes in the early 1990s after the Gulf War. South Korea was the country most hit by the financial crisis together with Indonesia and Thailand. Results indicate the dominance of oil price volatility on real stock returns and emphasize how this has increased over time. Oil price volatility can have profound effect on the time horizon of investment and firms need adjust their risk management procedures accordingly. This increase in dependency has been found in other net oil importing emerging equity markets. We test the relationship between oil price movements and economic activity by using modern time series techniques in a cointegrating framework. We expand the standard error correction model by examining the dynamics of out of sample causality through the generalized variance decomposition and impulse response function techniques. The evidence from persistence profiles also gives important guidelines based on how fast the entire system adjusts back to equilibrium. In addition, we find the cointegrating relationship to be stable and find that the linear error correction model to be more favorable than an asymmetric 2 period Markov switching model.

Since the oil price shocks of 1973–74 and 1979–80, dozens of academics and practitioners have explored the relationships between oil price shocks and the macroeconomic variables. The recessionary impacts of these oil prices shocks were too close for possible causal links to be ignored, and considerable attention has been devoted to study the macroeconomics of these events. Policymakers have to take serious account of the developments in the oil market, as a rise in the world price of oil imposes macroeconomic costs in two ways. First, to the extent that oil is both an important input to production and consumer goods (i.e. petrol and heating oil), results in a reduction in economic activity as energy becomes more expensive. Second, rising oil prices contribute directly to the level of inflation, particularly in energy dependent countries. Over time, the impact on activity and inflation will also depend on policy responses and supply-side effects.3 The high oil prices in 2005 and 2006 reflect the booming demand from Asia (especially China and India)4 and the geopolitical risk in the Middle East5 (the “fear premium” estimated to add between $4 and $8 to current prices). China and India have become two principal players on the global energy scene. In 1990, consumption in these two countries amounted to no less than 3.5 million barrels per day, approximately 5% of global petroleum use. In 2003, 13 years later, these two countries account for more than 10% of global oil consumption. (BP Statistical Review of World Energy Markets, 2004). It is difficult to distinguish temporary shocks from permanent shocks; and uncertainties related to large changes in oil prices can have significant effects on consumer confidence and therefore on growth. The impact of these oil price shocks is likely to be significantly greater in oil-importing countries, especially where policy frameworks are weak, foreign exchange reserves are low, and access to international capital markets is limited. Government authorities combat oil price hikes by using monetary and fiscal policies. For example, in order to maintain high industrial production and exports revenues, interest rates are kept at low levels. However, it is difficult to evaluate the impact of the oil price shocks on different variables of the macroeconomic environment, especially the impact on the stock markets. It is perhaps noteworthy that it was only in the 1990s that researchers seriously examined the impact of oil price shocks on stock markets.6 Macroeconomics and financial dynamics have not been captured together in one model when subjected to oil price shocks, especially for a net oil importing and emerging economy such as South Korea. The Republic of Korea (South Korea) is important to world energy markets, as it happens to be the seventh largest oil consumer and the fifth largest net oil importer in the world. Korea relies entirely on oil imports as there are no oil reserves in the country or surrounding areas. Hence, being a net importer of oil, the movements or fluctuations in oil prices are of major relevance for the Korean government when taking policy decisions that affect the national economy. The two major oil crises of the 1970s and 1980s significantly affected South Korea's macroeconomic performance. By using monetary and fiscal policies the country was able to weather the first oil price shock with some difficulties, but coping with the second crisis was much more challenging and South Korea experienced the worst stagflation between 1973 and 1990. Korea's reliance on foreign sources for its energy requirements drastically increased between 1960 and 1990. For instance, Korea's total indigenous energy production to foreign imports continuously declined from 54.77% in 1971, to 30.21% in 1980, and to 29.95% in 1990. This, in turn, increased foreign energy dependence from 71.7% in 1971 to 77.95% in 1980 to 82.01% in 1990.7 More recently, petroleum accounted for 54 percent of South Korea's primary energy consumption in 2002. In 2004, the country consumed around 2.14 million barrels a day (bbl/d) of oil, all of which was imported.8Glasure (2002) indicates that the real oil price is the major determinant of real income and energy consumption in South Korea. With the close dynamics between economic indicators and financial markets, many studies have used various proxies to illustrate the degree and direction of causality in a cointegrating VAR framework. To our knowledge these dynamics have not been observed together with exogenous oil price movements and oil price volatilities. This paper tries to answer the following questions. What is the long-run relationship between oil price movements and stock markets in an emerging market like South Korea? Did the stochastic trends change between industrial production, interest rates, stock markets and oil price change during the financial crises and oil price hikes in the early 1990s? What is the direction of causality between these variables and what are the implications for the transmission mechanisms of shocks? Can the domestic stock market be isolated from oil price movements? Answers to these questions will have serious fiscal and monetary policy implications not only to Korea but also to other energy dependent countries. The negative impact of oil price volatility on Korean industries could help the government in looking at alternative less volatile sources of fossil fuels such as nuclear, coal and Liquefied Natural Gas (LNG) which has continued to grow in popularity especially in electricity generation.9 To ensure energy substitution, proper infrastructure needs to be in place to make sure industries have the means to convert from oil intensive to gas or coal intensive processes. The paper is structured as follows. Section 2 provides a review of the literature and main debates surrounding the dynamics between stock markets and economic markets, together with impacts from energy and oil price movements. In Section 3 we describe the data used in the analysis and briefly discuss econometric concepts and methodology surrounding multivariate cointegration analysis and the out-of sample testing framework. The application and estimation results are presented in Section 4 with some tables and figures presented in Appendix A of the paper. In Section 5 we draw some important policy conclusions with respect to monetary policy and policies designed for stock markets to withstand oil price movements.