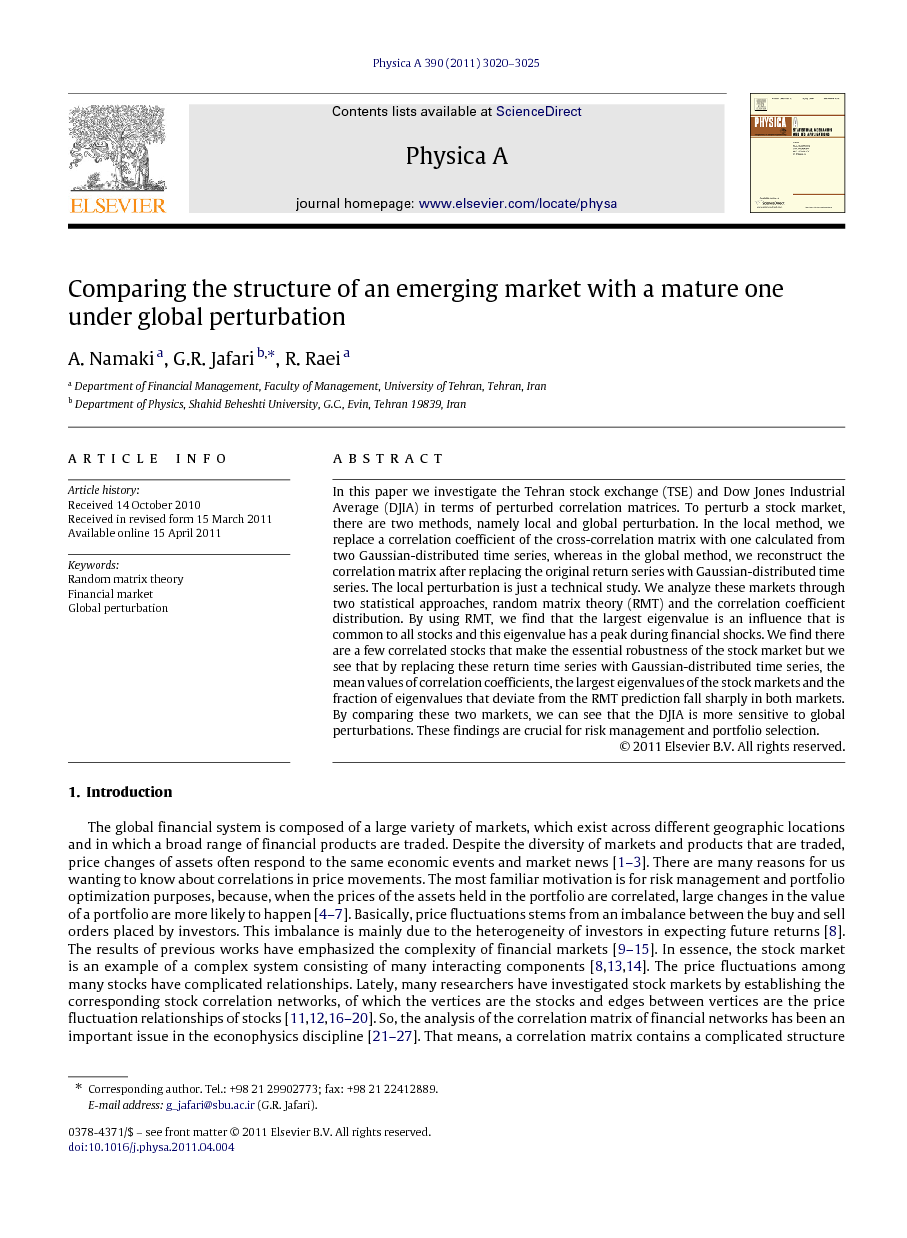 In this paper we investigate the Tehran stock exchange (TSE) and Dow Jones Industrial Average (DJIA) in terms of perturbed correlation matrices. To perturb a stock market, there are two methods, namely local and global perturbation. In the local method, we replace a correlation coefficient of the cross-correlation matrix with one calculated from two Gaussian-distributed time series, whereas in the global method, we reconstruct the correlation matrix after replacing the original return series with Gaussian-distributed time series. The local perturbation is just a technical study. We analyze these markets through two statistical approaches, random matrix theory (RMT) and the correlation coefficient distribution. By using RMT, we find that the largest eigenvalue is an influence that is common to all stocks and this eigenvalue has a peak during financial shocks. We find there are a few correlated stocks that make the essential robustness of the stock market but we see that by replacing these return time series with Gaussian-distributed time series, the mean values of correlation coefficients, the largest eigenvalues of the stock markets and the fraction of eigenvalues that deviate from the RMT prediction fall sharply in both markets. By comparing these two markets, we can see that the DJIA is more sensitive to global perturbations. These findings are crucial for risk management and portfolio selection.

The global financial system is composed of a large variety of markets, which exist across different geographic locations and in which a broad range of financial products are traded. Despite the diversity of markets and products that are traded, price changes of assets often respond to the same economic events and market news [1], [2] and [3]. There are many reasons for us wanting to know about correlations in price movements. The most familiar motivation is for risk management and portfolio optimization purposes, because, when the prices of the assets held in the portfolio are correlated, large changes in the value of a portfolio are more likely to happen [4], [5], [6] and [7]. Basically, price fluctuations stems from an imbalance between the buy and sell orders placed by investors. This imbalance is mainly due to the heterogeneity of investors in expecting future returns [8]. The results of previous works have emphasized the complexity of financial markets [9], [10], [11], [12], [13], [14] and [15]. In essence, the stock market is an example of a complex system consisting of many interacting components [8], [13] and [14]. The price fluctuations among many stocks have complicated relationships. Lately, many researchers have investigated stock markets by establishing the corresponding stock correlation networks, of which the vertices are the stocks and edges between vertices are the price fluctuation relationships of stocks [11], [12], [16], [17], [18], [19] and [20]. So, the analysis of the correlation matrix of financial networks has been an important issue in the econophysics discipline [21], [22], [23], [24], [25], [26] and [27]. That means, a correlation matrix contains a complicated structure of interdependence among investors. Some research has been done in investigating the correlation structure of emerging markets [28] and [29]. Also, several studies have reported the differences between mature and emerging markets [30] and [31]. These findings have shown that emerging markets behave differently from mature ones. The goal of this paper is to investigate the vulnerability of the structure of the Tehran stock exchange (TSE) as an emerging market [32] and [33] under global perturbation and compare it with the Dow Jones Industrial Average (DJIA) as a mature market. The global perturbation is the reconstruction of a cross-correlation matrix of the stock market after replacing the time series of returns by Gaussian-distributed time series, which in turn transforms correlations matrix elements CijCij [8]. By utilizing techniques, random matrix theory (RMT) and correlation coefficient distributions, we obtain significant responses induced from a perturbed correlation matrix that is constructed from financial time series. We chose to study these specific markets because there is little work published in the field of perturbation in emerging markets and the differences between these markets and mature ones. We used two different databases covering securities from the Tehran stock exchange and the Dow Jones Industrial Average index. We analyzed the daily change of the Tehran stock market and DJIA prices in the same period of 5-yrs from 1st of April 2005 until 1st of Jul 2010. The paper is organized as follows: In Section 2 we describe how to construct the cross-correlation matrix. In Section 3 we discuss the notion of global perturbation and the effect of perturbation on the mean values of the cross-correlation coefficients. In Section 4 we apply RMT to analyze the perturbed matrices. Finally in Section 5 we draw our conclusions.