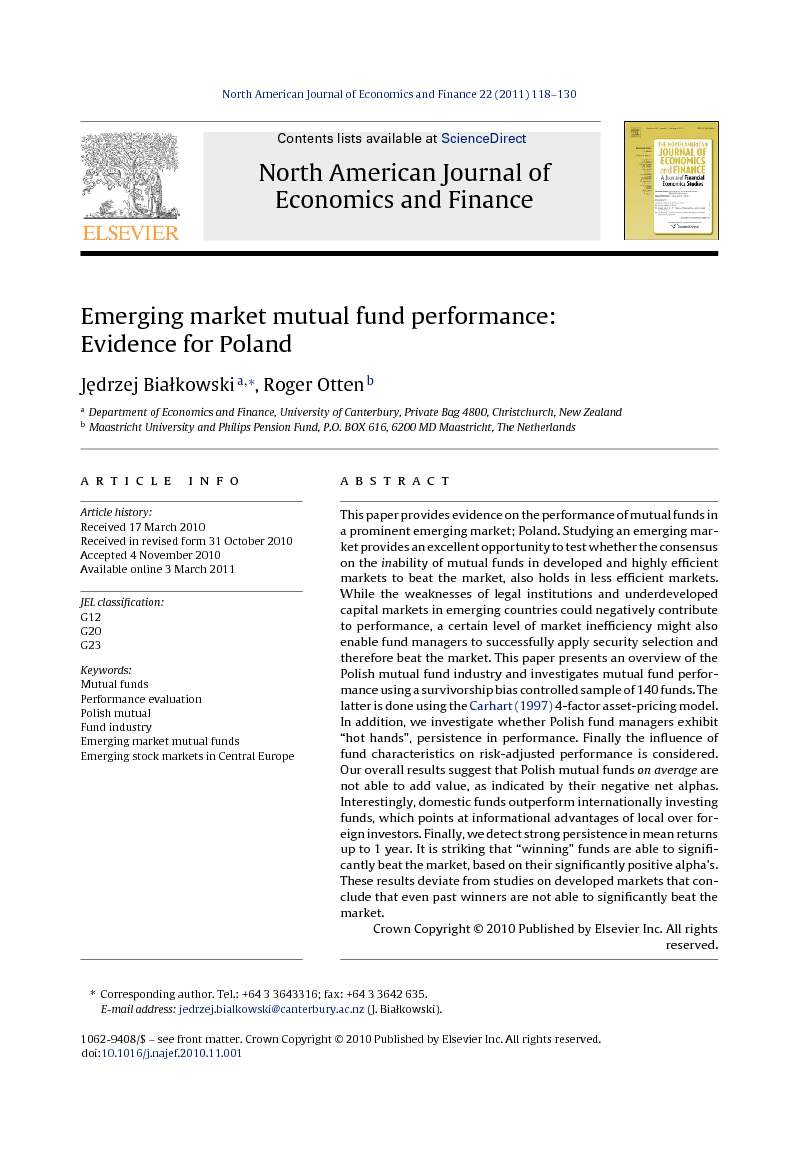 This paper provides evidence on the performance of mutual funds in a prominent emerging market; Poland. Studying an emerging market provides an excellent opportunity to test whether the consensus on the inability of mutual funds in developed and highly efficient markets to beat the market, also holds in less efficient markets. While the weaknesses of legal institutions and underdeveloped capital markets in emerging countries could negatively contribute to performance, a certain level of market inefficiency might also enable fund managers to successfully apply security selection and therefore beat the market. This paper presents an overview of the Polish mutual fund industry and investigates mutual fund performance using a survivorship bias controlled sample of 140 funds. The latter is done using the Carhart (1997) 4-factor asset-pricing model. In addition, we investigate whether Polish fund managers exhibit “hot hands”, persistence in performance. Finally the influence of fund characteristics on risk-adjusted performance is considered. Our overall results suggest that Polish mutual funds on average are not able to add value, as indicated by their negative net alphas. Interestingly, domestic funds outperform internationally investing funds, which points at informational advantages of local over foreign investors. Finally, we detect strong persistence in mean returns up to 1 year. It is striking that “winning” funds are able to significantly beat the market, based on their significantly positive alpha's. These results deviate from studies on developed markets that conclude that even past winners are not able to significantly beat the market.

Studying mutual funds has served as an excellent laboratory for numerous researchers interested in testing for market efficiency. Based on over 4 decades of mutual fund performance studies there now exists a strong consensus on the inability of mutual funds to beat the market after all relevant fees are deducted. More specifically, the alpha's on the estimated factor models are significantly negative, by about the amount equal to the fees that are charged. The vast majority of these studies however focused on the US mutual fund industry which in terms of assets under management and holding of the domestic equity market is far ahead of the rest of the world. 1 More recently several studies turned to European mutual funds as data coverage on non-US markets improved. However, most European studies focus on individual countries, which makes it difficult to draw comprehensive conclusions across countries. 2 A notable exception to this is offered by Otten and Bams (2002). By studying a survivorship bias free sample of 506 mutual funds from France, Germany, Italy, United Kingdom and The Netherlands they find that the average European mutual fund produces an alpha that is insignificantly different from zero. Adding back management fees, led to 4 out of 5 countries exhibiting significant outperformance at an aggregate level. The authors argue that the smaller market importance of European mutual funds might put them in a better position to follow or even beat the market. This in sharp contrast to US funds which represent over 30% of stock market capitalisation, while European funds only represent about 10% of their local stock market capitalisation. Evidence on emerging market mutual funds is scarce. Based on for instance Ferraira et al. (2006) and Khorana, Servaes, and Tufano (2005) there is a positive relation between risk-adjusted performance and variables like the strength of legal institutions and the development of the capital market. Following those arguments it is expected that emerging market mutual funds underperform. On the other hand, several studies of emerging market mutual funds based in mature markets document an outperformance. For instance, Borensztein and Gelos (2000) have shown that managers of emerging market mutual funds are characterised by better market timing. On average, they were able to rebalance their portfolios at least one month before a crisis. A more recent study by Huij and Post (2009) finds that US mutual funds investing in emerging markets are able to generate returns that are sufficiently large to cover their expenses. Also, the authors document a strong persistence in performance of past winners over past losers. They conclude by stating that emerging market funds generally display better performance than US funds. The two above mentioned studies are based on emerging market funds, based in mature markets (such as the US). Based on informational advantages one could suspect that local (domestic) investors would outsmart foreign investors, especially in emerging markets. This is well documented by for instance Brennan and Cao (1997), Coval and Moskowitz (1999) and Hau (2001). Otten and Bams (2007) examine local versus foreign mutual fund performance in a developed market, the United States, and find no difference. Therefore, our study will focus on mutual funds, operating and investing in an emerging market, in contrast to previous studies that scrutinize emerging market funds from mature markets investing in emerging markets. We choose to study the Polish fund market for three reasons. First, in the group of Central European countries that became members of the European Union (EU), Poland was characterised as the most developed mutual fund market. Secondly, the Polish fund market provides an opportunity to study a fast growing market. During the 8-year period of our analysis the number of funds grew by 23% per year and the total value of assets under management grew tenfold. Thirdly, in contrast to studies on Polish pensions funds by Voronkowa and Bohl (2005) and Stanko (2003) studies on the Polish mutual funds market are scant. To our knowledge the only published study on the topic is the paper by Swinkels and Rzezniczak (2009). Based on a sample of 38 surviving funds from January 2000 to April 2007 they conclude that Polish funds produce 1-factor CAPM alpha's that are insignificantly different from zero. We extend the above mentioned analysis of Polish funds by Swinkels and Rzezniczak (2009) in three ways. First, we employ an extended survivorship controlled database of 140 funds (over the January 2000 to January 2008 period). Second, we measure performance using the 4-factor Carhart model designed to control for investment style. Third, we add persistence tests to measure the extent to which Polish mutual funds exhibit a predictable return behaviour. The main added value of our study to the existing mutual fund literature is threefold. First, it provides evidence on the performance of emerging market funds managed within an emerging market, in contrast to studies that analysed funds from the perspective of mature markets investing in emerging markets. This sheds light on the performance of local versus foreign fund managers. Second, the Polish fund market enables us to study the impact of a fast growing market on fund performance. Third, we study performance and persistence in performance in an emerging market using a survivorship bias controlled database using state of the art multi-factor asset pricing models. The paper is organized as follows: The next section presents the development and characteristics of Polish mutual fund industry. Section 3 contains data description and summary statistics of the data. Section 4 provides a description of the model used to evaluate performance. The results of the analysis are described in Section 5. Finally, Section 6 presents conclusions.

This study investigates the Polish mutual fund industry. More specifically we test the performance and persistence in performance of a survivorship controlled sample of 140 mutual funds over the 2000–2008 period using a multi-factor Carhart model. The Polish mutual fund industry provides an excellent opportunity to test performance in an emerging market. On the one hand weaker legal institutions and an underdeveloped capital market might influence mutual fund performance negatively. On the other hand the small size of the industry compared to the total market capitalisation and the presumably less efficient market creates opportunities for managers to beat the market. Our main conclusions are five-fold. First, we corroborate the evidence found in previous studies on developed markets; Polish funds underperform their relevant benchmarks. Second, domestic funds outperform international funds. While domestic funds produce Carhart alpha's that are indifferent from zero, international funds underperform significantly. Third, both domestic and international funds have exposure outside their region. That is, international funds exhibit a home bias and domestic funds also invest internationally. This confirms earlier results where domestic investors profit from informational advantages over foreign investors. Fourth, adding back management fees to excess returns leads to significantly positive alpha's for domestic funds, while international funds now produce alphas that are indifferent from zero. This reveals the fact that domestic managers are able to beat their local market, but charge investors too much for this. Fifth, we document strong persistence in performance. The strategy of buying last year's top funds and selling last year's bottom funds yields a return in the range of 13.44–17.52% per year. In contrast to previous studies, this effect is both driven by icy hands and hot hands. More specifically, the strategy of buying winners produces significantly positive alpha's while the losers produce significantly negative alpha's.