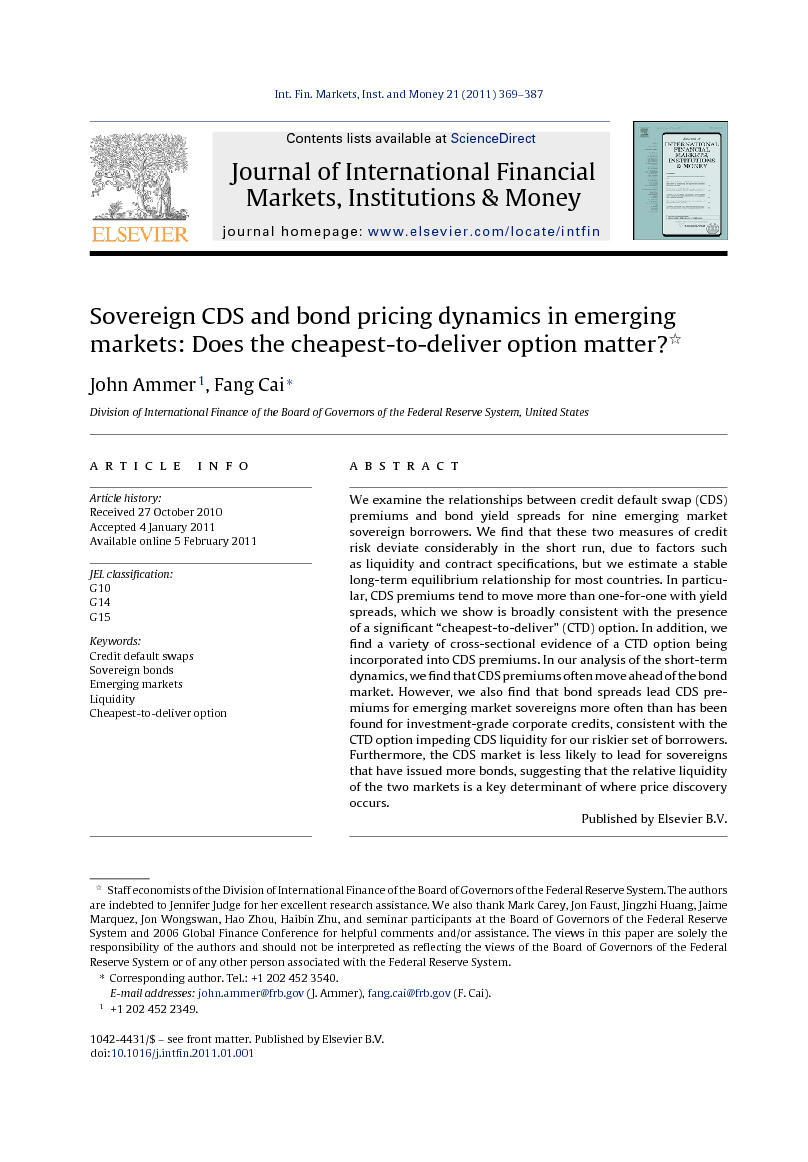 We examine the relationships between credit default swap (CDS) premiums and bond yield spreads for nine emerging market sovereign borrowers. We find that these two measures of credit risk deviate considerably in the short run, due to factors such as liquidity and contract specifications, but we estimate a stable long-term equilibrium relationship for most countries. In particular, CDS premiums tend to move more than one-for-one with yield spreads, which we show is broadly consistent with the presence of a significant “cheapest-to-deliver” (CTD) option. In addition, we find a variety of cross-sectional evidence of a CTD option being incorporated into CDS premiums. In our analysis of the short-term dynamics, we find that CDS premiums often move ahead of the bond market. However, we also find that bond spreads lead CDS premiums for emerging market sovereigns more often than has been found for investment-grade corporate credits, consistent with the CTD option impeding CDS liquidity for our riskier set of borrowers. Furthermore, the CDS market is less likely to lead for sovereigns that have issued more bonds, suggesting that the relative liquidity of the two markets is a key determinant of where price discovery occurs.

In this paper, we analyze the relationship between sovereign CDS premiums and bond yield spreads for nine emerging-market sovereign credits over a four-year period. For most countries in our sample, we find that sovereign CDS premiums and bond spreads are linked by a stable linear long-run equilibrium relation. The two prices of credit risk, however, often diverge from the equilibrium in the short run, with these temporary deviations typically dissipating at a rate of 5–13 percent per day. This gradual convergence in prices implies that there is some predictability of relative price changes between the two markets, which is sustained by some combination of illiquidity in at least one of the two markets and risk that arises from the imperfections in the underlying arbitrage relation. CDS markets seem to lead bond markets in price discovery in some instances, but lag bond prices in other cases. We find some evidence that the relatively more liquid market tends to lead the other. In particular, across our sovereign borrowers, we calculate that the GG measure of relative CDS price leadership is correlated (i) positively with the ratio of the bond bid-ask spread to the CDS bid-ask spread and (ii) negatively with the number of bonds outstanding (a proxy for collective bond market liquidity), with a statistically significant coefficient in the second case. Price leadership in the more liquid market is consistent with sovereign credit risk pricing being driven mostly by public information. Overall, the bond market leads more often for our emerging-market sovereign borrowers than has been reported by Blanco et al. (2005) for investment-grade corporate names. Accordingly, the CDS market may not be as clear-cut a choice as a benchmark for credit pricing for sovereign bond issuers as it is for corporate borrowers. We also derive the pricing implications of the CTD option in CDS contracts, and report a variety of evidence that the CTD option is quantitatively important in our sample, and in particular that the value of the CTD option is an important determinant of the CDS basis – the difference in credit pricing between the CDS and bond markets. For example, we find that the CDS basis tends to be higher for a borrower for which the ex post CTD option is likely to be larger, because it has issued at least one bond with a below-market coupon, long maturity, and/or low pre-default market value, as a fraction of the face value that would be insured by CDS protection. We also find that the CDS basis tends to be higher for riskier reference entities with lower credit ratings and higher bond yield spreads. This is consistent with the presence of the CTD option, because all else equal, the option is more valuable ex ante when the probability of a default event is higher. Similarly, in our dynamic analysis, we find that CDS premiums tend to move more than one-for-one with bond yield spreads; all else equal, a rising yield spread is associated with an increasing probability of a credit event. In addition, we report a statistically significant negative correlation across sovereign borrowers between the estimated long-run slope and the cheapest bond price, further evidence that CDS premiums move more than one-for-one with bond yield spreads specifically because of the CTD option. We also report some weaker evidence that suggests the estimated long-run slope is negatively associated with CDS liquidity, consistent with the CTD option creating a market friction that is an impediment to liquidity. Our results concerning the importance of the CTD option have a number of further implications. First, the CTD option appears to be quantitatively important enough so that it should be accounted for in any CDS pricing model. Second, the CTD option appears to have a significant effect on optimal hedging ratios versus the underlying debt, with protection buyers often over-hedged, if they match the CDS notional amount to the face value of their debt holdings. Third, the pay-off to a CDS protection buyer of a strategic delivery choice is a factor in optimal CDS contract design, particularly in the trade-off between flexibility and specificity in settlement procedures after a covered credit event. To the extent that the least valuable bond would always be delivered, even when the protection buyer had been hedging a position in a different asset, it is not at all clear that the wide choice in deliverable instruments available under prevailing market conventions is desirable, particularly if there is ex ante uncertainty about the extent to which the CTD option will be in-the-money after a credit event. Finally, the value of the CTD option incorporated into CDS pricing can make it more difficult to draw inferences from CDS premiums about the market price of the underlying credit risk. This is a potential drawback for risk management, and to policy makers who use market prices to monitor credit risk and credit market conditions.