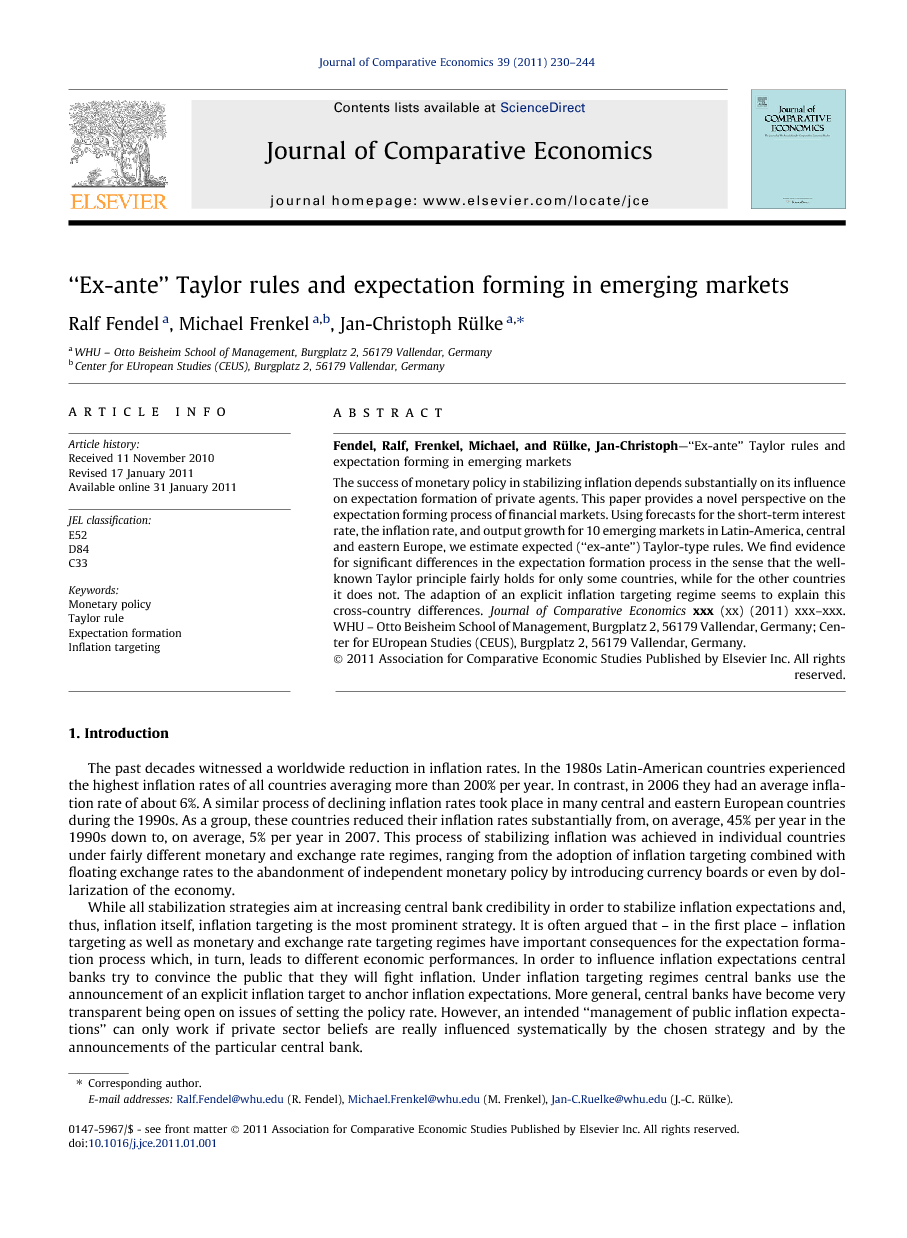 The success of monetary policy in stabilizing inflation depends substantially on its influence on expectation formation of private agents. This paper provides a novel perspective on the expectation forming process of financial markets. Using forecasts for the short-term interest rate, the inflation rate, and output growth for 10 emerging markets in Latin-America, central and eastern Europe, we estimate expected (“ex-ante”) Taylor-type rules. We find evidence for significant differences in the expectation formation process in the sense that the well-known Taylor principle fairly holds for only some countries, while for the other countries it does not. The adaption of an explicit inflation targeting regime seems to explain this cross-country differences.

The past decades witnessed a worldwide reduction in inflation rates. In the 1980s Latin-American countries experienced the highest inflation rates of all countries averaging more than 200% per year. In contrast, in 2006 they had an average inflation rate of about 6%. A similar process of declining inflation rates took place in many central and eastern European countries during the 1990s. As a group, these countries reduced their inflation rates substantially from, on average, 45% per year in the 1990s down to, on average, 5% per year in 2007. This process of stabilizing inflation was achieved in individual countries under fairly different monetary and exchange rate regimes, ranging from the adoption of inflation targeting combined with floating exchange rates to the abandonment of independent monetary policy by introducing currency boards or even by dollarization of the economy. While all stabilization strategies aim at increasing central bank credibility in order to stabilize inflation expectations and, thus, inflation itself, inflation targeting is the most prominent strategy. It is often argued that – in the first place – inflation targeting as well as monetary and exchange rate targeting regimes have important consequences for the expectation formation process which, in turn, leads to different economic performances. In order to influence inflation expectations central banks try to convince the public that they will fight inflation. Under inflation targeting regimes central banks use the announcement of an explicit inflation target to anchor inflation expectations. More general, central banks have become very transparent being open on issues of setting the policy rate. However, an intended “management of public inflation expectations” can only work if private sector beliefs are really influenced systematically by the chosen strategy and by the announcements of the particular central bank. This paper analyzes the public beliefs about interest rate setting of the central bank by examining the structure of the expectation formation process in financial markets. Since Taylor rules have become the prominent tool to describe central bank behavior, we evaluate the performance of a group of 10 emerging markets by the means of expected Taylor rules, i.e. “ex-ante” Taylor rules. We ask whether the internal relations of the forecasted variables (i.e., short-term interest rate, inflation and growth) can be described by Taylor rules. The paper, thus, changes the perspective on interest rate rules away from the typical use in the academic literature as an ex-post reaction function for explaining central bank behavior. We use data from the Consensus Economic Forecast poll and examine whether “ex-ante” Taylor rules are present in the expectation formation process for emerging market variables. The data set includes Argentina, Brazil, Chile, Czech Republic, Hungary, Mexico, Poland, Slovakia, Turkey, and Venezuela. Since this country group includes inflation targeting countries as well as non-inflation targeting countries, we are also able to test whether the adoption of inflation targeting matters for our results. To this end, this paper is structured as follows: The subsequent section briefly reviews the commonly applied empirical concept of Taylor-type rules which we use as the starting point of our analysis. Section 3 introduces the data set. Sections 4 and 5 present the empirical results. Subsequently, Section 6 studies the sample sub-group of inflation targeting countries in more detail by looking at the importance of the time-varying inflation target and the consistency issue. Finally, Section 7 concludes.