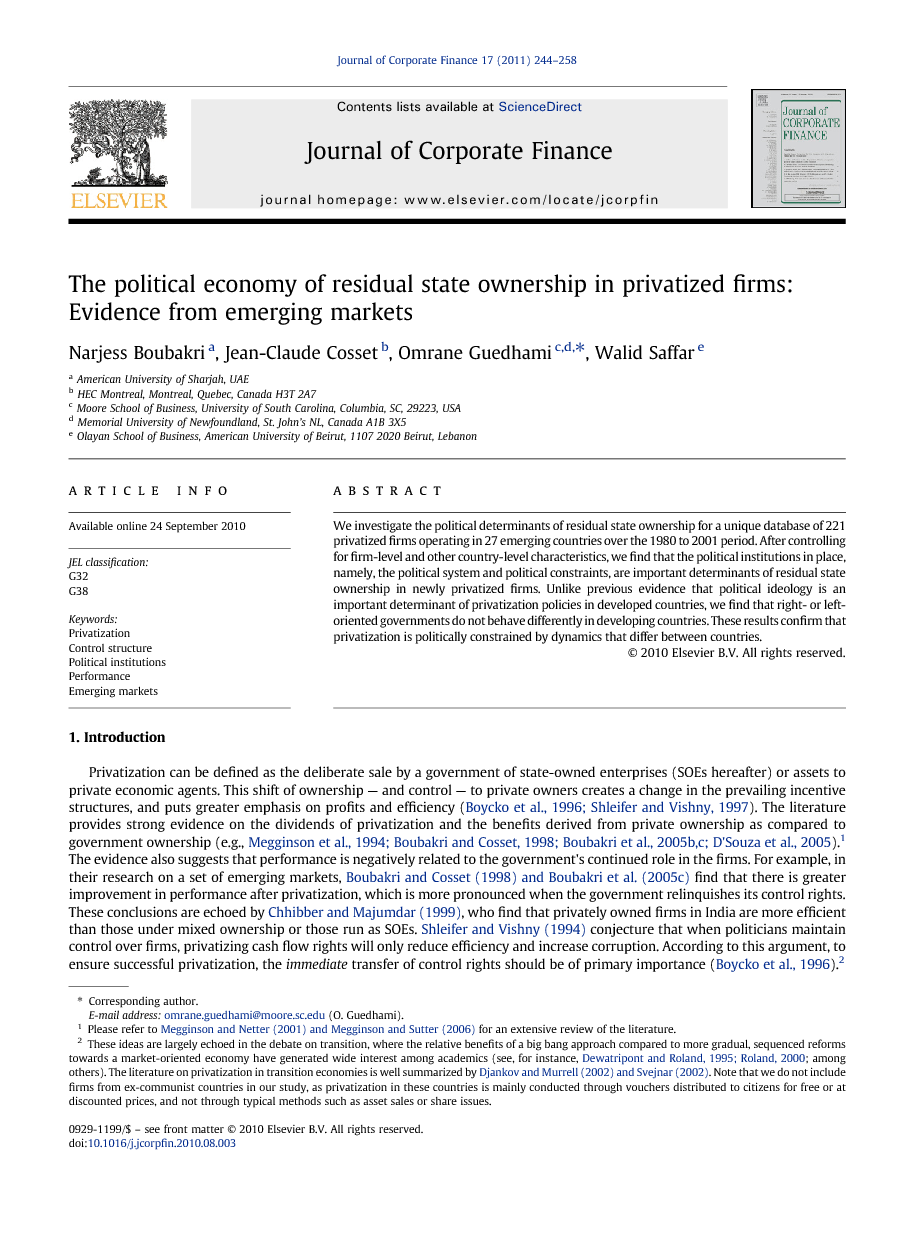 We investigate the political determinants of residual state ownership for a unique database of 221 privatized firms operating in 27 emerging countries over the 1980 to 2001 period. After controlling for firm-level and other country-level characteristics, we find that the political institutions in place, namely, the political system and political constraints, are important determinants of residual state ownership in newly privatized firms. Unlike previous evidence that political ideology is an important determinant of privatization policies in developed countries, we find that right- or left-oriented governments do not behave differently in developing countries. These results confirm that privatization is politically constrained by dynamics that differ between countries.

In this paper, we use a political economy framework and a unique database to investigate the control structure of 221 privatized firms from 27 emerging markets over the 1980 to 2001 period. We find that the control structure of privatized firms in emerging countries differs from that of firms privatized in OECD countries, as observable (direct) government ownership is not significantly different from the government's ultimate ownership, owing to the fact that most privatizations are gradual and do not involve a transfer of control rights. In country-level regressions we find that political factors can shape residual state ownership, as predicted by prior privatization theory (e.g., Perotti, 1995 and Biais and Perotti, 2002) and empirical evidence on share issue privatization design (e.g., Jones et al., 1999). More specifically, the results show that the type of political system (e.g, parliamentary and presidential), and the degree of political constraints (e.g., checks and balances) are significant determinants of residual state ownership in NPFs even after controlling for the influence of the legal environment. For example, residual state ownership in NPFs is higher under parliamentary systems than under presidential systems. In addition, consistent with extant arguments in the political economy literature (Alesina and Drazen, 1991), we find that when political constraints and the power of veto players are higher, they limit the ability of governments to put in place market-oriented reforms such as privatization. Facing such constraints, the government is more likely to privatize slowly, divesting small stakes in a sequence of sales over time. Our measure of political constraints is thus positively related to residual government ownership. Throughout our analysis, however, the ideology of the executive appears to be insignificant, a result that contrasts with theoretical arguments in Biais and Perotti (2002) and empirical evidence based on OECD countries that support the view that government control is significantly determined by the ideology of the executive (Bortolotti and Faccio, 2009). Our results are robust to a battery of robustness checks and alternative proxies for our dependent and explanatory variables, and taken as a whole suggest that privatization dynamics not only differ between developed and emerging markets, but also within emerging markets.