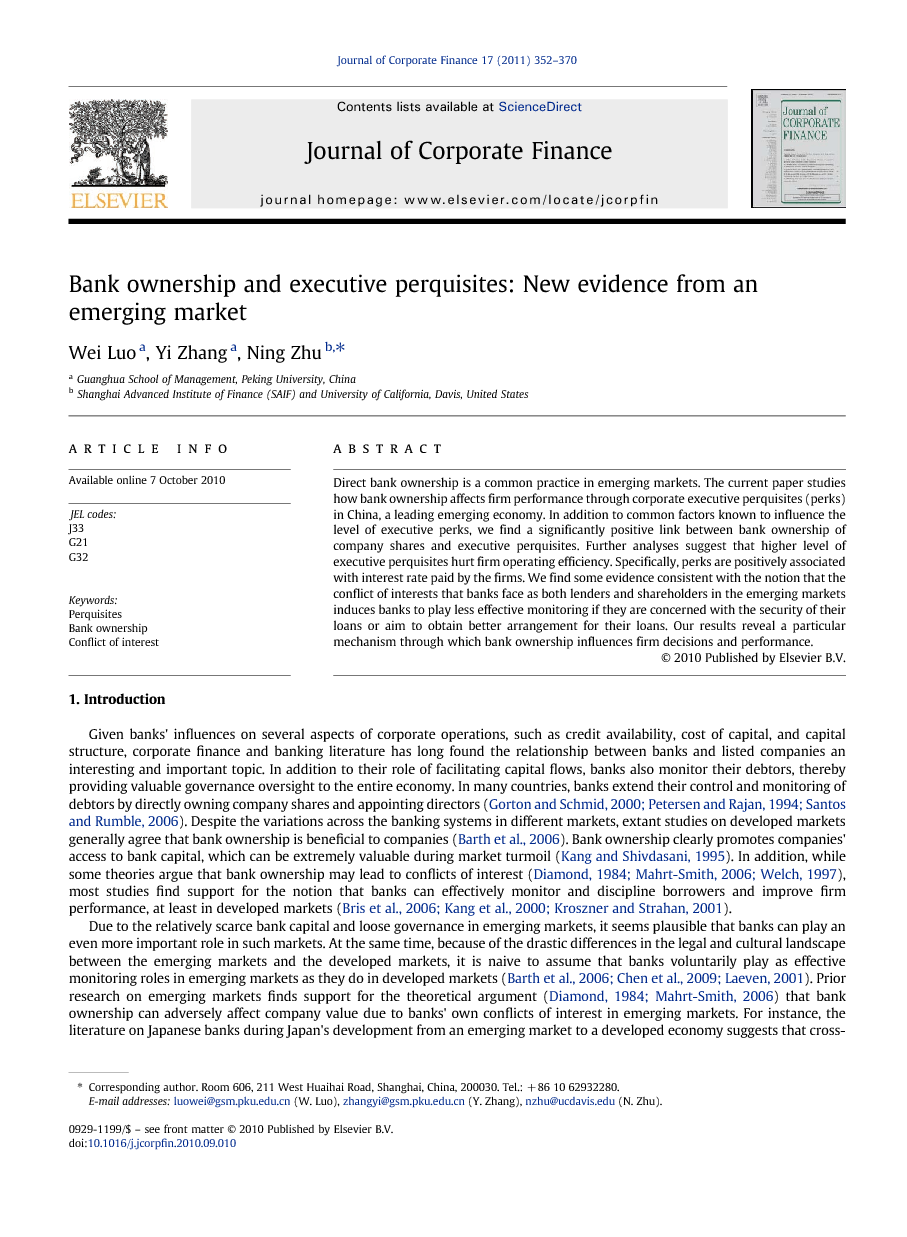 Direct bank ownership is a common practice in emerging markets. The current paper studies how bank ownership affects firm performance through corporate executive perquisites (perks) in China, a leading emerging economy. In addition to common factors known to influence the level of executive perks, we find a significantly positive link between bank ownership of company shares and executive perquisites. Further analyses suggest that higher level of executive perquisites hurt firm operating efficiency. Specifically, perks are positively associated with interest rate paid by the firms. We find some evidence consistent with the notion that the conflict of interests that banks face as both lenders and shareholders in the emerging markets induces banks to play less effective monitoring if they are concerned with the security of their loans or aim to obtain better arrangement for their loans. Our results reveal a particular mechanism through which bank ownership influences firm decisions and performance.

This paper studies how bank ownership affects firm performance through executive perquisites (perks) in China. Consistent with Lin et al. (2009), we find that bank ownership decreases firm performance. Our exploration of the causes behind such under-performance suggests that there exists a significantly positive link between bank ownership of company shares and executive perquisites. Further analyses reveal that higher level of executive perquisites hurts company operating efficiency, and is related to higher interest rates of bank loans. Thus, the underperformance of firms with bank ownership may result from the conflict of interests that banks face as both lenders and shareholders in the emerging markets: banks may choose to influence corporate executives and play less effective monitoring if they are concerned with the security of their loans or aim to obtain better arrangement for their loans. Such findings suggest that banks in emerging markets do seem to exercise monitoring over their loans to affiliated companies, however at the cost of higher executive perks, which in turn harm to the benefits of other shareholders of the firm. Finally, our preliminary exploration suggests that one possible reason for the disappointing performance of bank-owned companies may be their generous executive perquisites and the lack of monitoring exercised by banks. It seems that the dual role played by banks as both creditors and leading shareholders hinder them from effectively checking on firm decisions on executive perquisites. With recent global trend of universal banking, Chinese commercial banks have been developing toward universal banking as well since 2005 (Cao, 2008) and bank holding in firms are increasing again though via more indirect way at present. Our results may have implications for the policy makers. It is worth noting that such results are preliminary and subject to discretion due to data limitations. First, because Chinese firms are not required to disclose executive perks, we cannot directly observe the amount of executive perks, and have to resort to our proxies of perks which are subject to noises. Second, the overall interest rate may not fully capture the benefit of the holding bank. In addition to interest rates, holding banks may benefit from higher likelihood of obtaining collaterals for bank loans, the timing of paying interest and principal by the firm, and other channels. Further, it seems that how other creditors react to the behavior of holding banks probably has important implications to holding banks' influence on corporate policies. However, because there is no detailed data on loan contracts from holding banks and other creditors, future studies are needed to provide definitive answers to this and other above limitations of the current study.