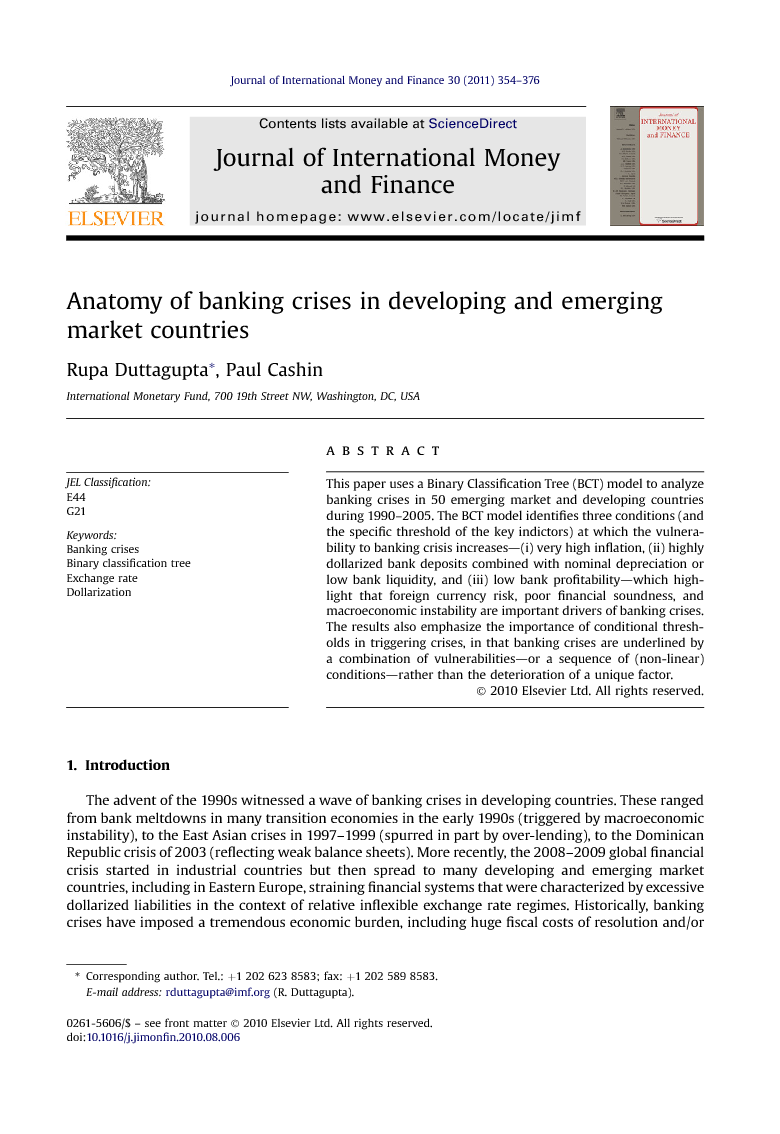 This paper uses a Binary Classification Tree (BCT) model to analyze banking crises in 50 emerging market and developing countries during 1990–2005. The BCT model identifies three conditions (and the specific threshold of the key indictors) at which the vulnerability to banking crisis increases—(i) very high inflation, (ii) highly dollarized bank deposits combined with nominal depreciation or low bank liquidity, and (iii) low bank profitability—which highlight that foreign currency risk, poor financial soundness, and macroeconomic instability are important drivers of banking crises. The results also emphasize the importance of conditional thresholds in triggering crises, in that banking crises are underlined by a combination of vulnerabilities—or a sequence of (non-linear) conditions—rather than the deterioration of a unique factor.

In this paper, we use a Binary Classification Tree (BCT) methodology to show that banking crises are underlined by a combination of “bads” and not any single compelling factor. The BCT model’s unique advantage is that it recognizes that an indicator may increase the probability of an outcome only after crossing a certain threshold, and sometimes only in combination with other conditions, and the model identifies both the thresholds and the sequence of relationships underlying the outcome of interest. This feature makes BCT a unique tool to analyze crises, which are generally triggered by a complex interaction of vulnerabilities. While the BCT has recently been used to analyze other economic crises including currency, sovereign debt and capital account crises, to our knowledge this is the first paper that uses the technique to look more closely at banking crises. To investigate the underlying vulnerabilities of a banking crisis we consider both traditional indicators of macroeconomic fundamentals and external factors, but also monetary conditions and financial soundness vulnerabilities. The BCT results stress that unconditional thresholds of variables are not as important in predicting banking crises as conditional thresholds, and that indicators trigger banking sector problems only after crossing these thresholds. Several indicators of financial market conditions are identified as important predictors of impending banking crises; in particular, nominal depreciation, interest profitability, liability dollarization and bank illiquidity. However, crises are triggered by complex interactions between financial soundness indicators and macroeconomic variables. The crisis-prone conditions identified by alternative BCT specifications confirm that foreign exchange risk is one of the largest vulnerabilities underlying banking crises, in that the probability of a banking sector crisis increases when preceded by a nominal depreciation combined with high liability dollarization. However, banks can be crisis-prone even when depreciation is limited, owing to the combination of high liability dollarization with low liquidity. For severe crises, defined as banking crises that are accompanied with negative growth, three indicators matter the most—nominal depreciation, liability dollarization in banks, and bank liquidity—but only when they cross identified thresholds. These results support the findings of recent literature that stress the role of FX risk in triggering banking crises (Kaminsky and Reinhart, 1999, Levy-Yeyati, 2005 and Levy-Yeyati, 2006, and Nicolo et al. (2003)). As a caveat, owing to the absence of time series data on these indicators, our analysis excluded some institutional indicators that have previously been associated with banking crises, such as lack of central bank independence, corporate governance weaknesses in the regulatory framework, and low share of foreign ownership of the banking system. When dummy variables corresponding to the thresholds of key primary splitters in the BCT are included in a standard logit regression they are statistically significant. In addition, dummy variables corresponding to the crisis terminal nodes of the BCT are also significant in the logit analysis. These findings confirm that banking crises are caused by a combination of macroeconomic, foreign exchange and financial soundness vulnerabilities acting together, which would have been virtually impossible to identify in a standard logit model. The ability of the BCT approach to identify these non-linear relationships underlying banking crises makes it a superior tool with which to monitor banking system vulnerabilities.